The cannabis company has some pretty big ambitions for the next few years.

Cannabis producer Tilray (TLRY 5.20%) is the industry leader in the Canadian pot market. Its low-cost operations have allowed the company to post a stronger bottom line than many of its peers. Plus, Tilray is pursuing aggressive growth opportunities that could make the business even bigger in a few years.

Tilray is banking on some significant growth in Canada, the U.S., and other international cannabis markets. If it succeeds, it could be one of the best buys in the industry today. But there are also many things that can go wrong along the way. Is it worth taking a chance on this pot stock, or is there too much risk involved? 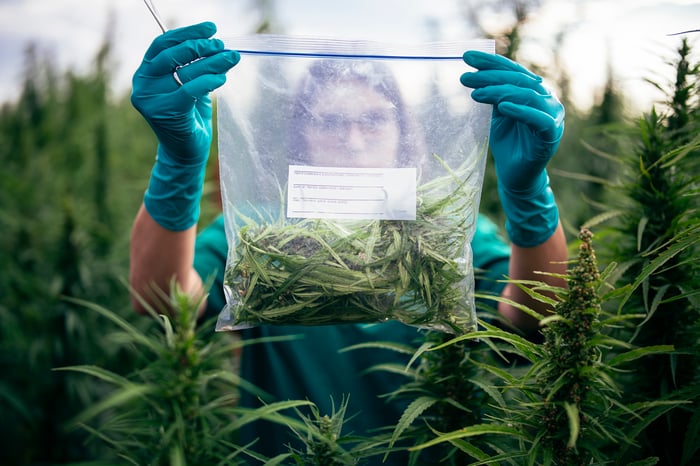 On Oct. 7, Tilray reported its most recent quarterly results, which marked the 10th straight quarter where the company reported positive adjusted earnings before interest, taxes, depreciation, and amortization (EBITDA).

At $12.7 million for the period ending Aug. 30, the profit was 7.6% of the $168 million that the company reported in net revenue. Tilray has a good deal of diversification in its top line, as cannabis revenue accounts for just 42% of all sales, followed by distribution revenue at 40% (this is mainly from its CC Pharma subsidiary in Germany), while its beverage and wellness segments account for 9% of sales apiece.

The company's sales were up 18% quarter over quarter and this marked the first full period of Aphria's results being included in the tally; the merger between the two cannabis companies closed officially on May 3.

Tilray is currently at an annual run rate of more than $670 million in sales but management is targeting the top line to hit $4 billion by 2024. It's an aggressive forecast and for Tilray to reach it, there are numerous things that need to happen, including:

The company's acquisition of Aphria will certainly help progress its growth in Canada but more acquisitions may be necessary for Tilray to reach its goal of nearly doubling market share. In the U.S., it has acquired the convertible notes of multi-state operator (MSO) MedMen Enterprises, which could lead to Tilray taking an equity stake in that business -- once it's legally permissible to do so. However, even if Tilray acquired the company it may not be all smooth sailing as the MSO has generated $150 million in revenue over the past four quarters but its net losses during that time have been higher at $158 million.

The challenge will undoubtedly be surrounding legalization as there's no telling when the U.S. might finally pass legislation to do so. And it's a similar situation in Europe. Although small progress is being made, it's still a long road ahead; Luxembourg recently made headlines that it would become the first country on the continent to legalize the production and consumption of cannabis (although it remains an offense to possess it in public). However, with a population of less than 700,000, the country is only the 37th largest in Europe and even if full recreation were to happen there, it likely would have a minimal impact on Tilray's plans for international growth.

Is the risk worth the reward?

Shares of Tilray are up 49% this year, doing much better than the Horizons Marijuana Life Sciences ETF that has risen by just 14% over the same period. The company's acquisition of Aphria has helped bolster its prospects over the long term, but analysts remain skeptical of how much higher it will go; many have set price targets of no higher than $12 -- which is right around where the stock trades today.

While there is much hype and excitement around the stock, the risk is too high to justify an investment in Tilray right now, especially if it falls short of its ambitious projections -- which might be tough to meet even under ideal circumstances. And for a stock that has a history of being incredibly volatile (in 2018 its share price briefly hit $300), it's better to pass on Tilray and invest in some safer cannabis stocks instead.

Why Pot Stocks Like Tilray and Aurora Crashed Hard Today
395%