Nvidia Omniverse could be the company's biggest growth opportunity.

Nvidia's (NVDA -5.91%) stock price has stretched to a high valuation of 115 times earnings following another blockbuster earnings report. That is an expensive price tag, but Nvidia is keeping it interesting by continuing to launch new products that expand its long-term growth potential.

During the earnings call, CEO Jensen Huang spoke about the massive opportunity with Nvidia Omniverse, a software platform that is designed as a collaboration tool for developers working on 3D simulation and virtual world-building. Huang said Omniverse is "one of the largest graphics opportunities that we've ever seen." 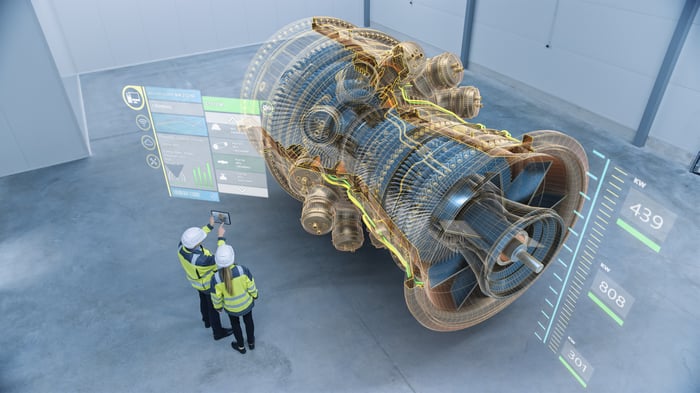 That statement has incredible significance for investors. Nvidia's professional visualization segment, which includes Omniverse, makes up only 8% of Nvidia's business right now. Moreover, Omniverse is a software platform, whereas Nvidia's main business is still about selling more graphics chips to data centers and gamers. If Huang is right, Nvidia might have just found another profitable growth driver that no one was talking about at the start of 2021.

Omniverse is Nvidia's answer to the metaverse -- a virtual world that will allow people to communicate with one another and engage with 3D objects using augmented reality, virtual reality, and artificial intelligence. This is an idea that has been introduced in several movies and novels over the years, with notable ones like The Matrix (1999) and Snow Crash (1992), and Nvidia is working to bring it to reality.

Nvidia just launched Omniverse Enterprise, which charges an annual license fee of $9,000, and it has been well received, with over 700 companies evaluating the platform. This launch comes just as Nvidia is starting to see a significant acceleration in the pro visualization segment.

In the fiscal third-quarter earnings report, Nvidia reported that total revenue increased by an impressive 50% year over year to reach $7.1 billion, but revenue from pro visualization increased by 144% year over year, reaching $577 million. After years of inconsistent growth, this segment has just started to take off in the last two quarters. 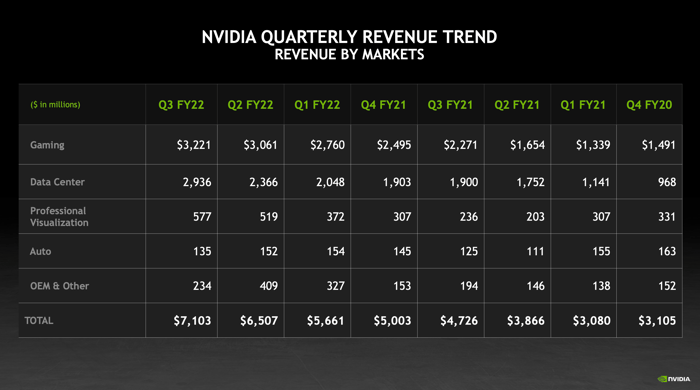 This could be just the start of an upswing in revenue growth for the pro visualization business, and it has the potential to be as big as data center and most likely larger than the gaming segment over the long term.

Nvidia could enable the future of e-commerce

Omniverse is a replication engine for training robots, augmenting real-world data, and basically simulating how the real world functions. This is what is meant by the "metaverse." It's not just playing games on Roblox or chatting with people using a virtual reality headset; it's envisioned as being a wholly separate, digital version of the real world.

One of the features of the metaverse is using virtual avatars that replicate yourself for others to see. Nvidia is offering Omniverse Avatar for this special purpose. There could also be a wide use of robotic avatars that could change the way people shop online. For example, Huang mentioned on the earnings call that there are approximately 25 million retail stores. Each of those stores could have a robotic avatar powered by artificial intelligence to assist you with checkout or browsing merchandise.

Nvidia Omniverse is essentially laying the infrastructure for the future of e-commerce. It also has practical applications for companies that can use Omniverse to create replications of buildings, factories, and cities to help optimize logistics and other business operations. It's a monster growth opportunity for Nvidia, but it may take a while to fully play out.

How big an opportunity is Omniverse?

During the earnings call, Huang referenced an annual license fee of $1,000 per user to use Omniverse. There are an estimated 40 million creators and designers around the world, which puts the addressable market at $40 billion.

However, there is more to the opportunity here. The $40 billion figure excludes the extra sales of graphics processing units (GPUs) that users will buy for their PC or cloud servers in order to run Omniverse, which can run on any device using Nvidia's RTX graphics technology. This opens the door for the mass market since any consumer laptop equipped with an RTX graphics card can use Omniverse.

Nvidia is really building a very lucrative flywheel around its hardware chip business with software platforms, which should continue to push Nvidia's gross margin and profits up over time.

All of this explains why Huang calls Omniverse the company's largest graphics opportunity. For now, investors should consider investing in Nvidia on the merits of its data center and gaming business, but keep a close eye on growth in the pro visualization segment. It could be an overlooked growth catalyst.