The EV industry has a lot of growth stocks that look attractive right now.

The Rivian Automotive (RIVN 7.54%) initial public offering (IPO) and the breakout of Lucid Group (LCID -0.51%) have pole-vaulted the electric vehicle (EV) industry into the limelight.

For investors looking for options outside of the headline names, ChargePoint (CHPT 3.76%) could be a great pick-and-shovel choice. A basket of multiple charging growth names could be a good option too. Here's the case for each. 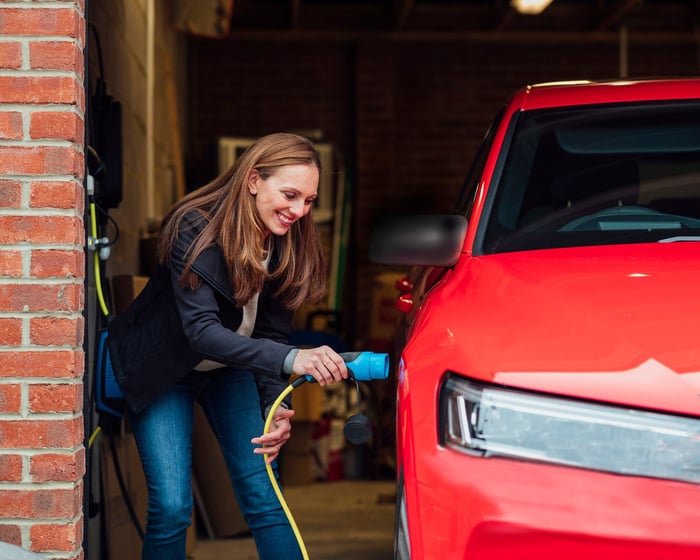 A rising tide lifts this boat

Daniel Foelber (ChargePoint): You may have heard of charging names like Blink Charging, (BLNK 2.33%), Volta (VLTA 0.37%), EVgo (EVGO 10.77%), and Wallbox. But even in a basket, ChargePoint is really the only one that is a viable option.

For the automakers, a technological edge means everything, but the charging segment is more about which company can be the most efficient. Scale is crucial, and ChargePoint is in the best position to keep growing and eventually become profitable.

Aside from the short-term goal, investors should be on the lookout to see if ChargePoint updates its multi-year revenue, earnings, and operating cash flow forecast in response to new industry developments and the passing of the bipartisan infrastructure bill. If ChargePoint shows it's back on the trajectory it was on in 2019 before the stall in 2020, then the long-term thesis remains intact.

ChargePoint may just be one of the best bets in the EV industry. Unlike in Europe, North American charging has a long way to go. As more EVs hit the road from automakers outside of Tesla, third-party charging networks will gain importance. With all of the exciting developments in the industry -- new models breaking the 500-mile range barrier and companies like Rivian going public -- it can be easy to forget that new EV sales account for less than 2% of passenger cars in the U.S. ChargePoint stands to benefit as automakers duke it out for market predominance.

Howard Smith (Volta/EVgo/Blink Charging/Wallbox): It does make sense to own a leader in any industry, and my colleague Daniel makes a great point about ChargePoint. But in the case of a fledgling industry like EV charging, a basket approach may be a better option at this time. Some of the other charging network companies for investors to choose from are taking different strategies to market. Volta, for instance, is unique in its partnerships with retailers and other local businesses that use the large monitors on its charging ports to advertise, bringing it a separate income stream.

The new infrastructure bill mentioned above has $7.5 billion allocated to grow this country's charging network. Those funds will likely be doled out by states in the form of grants that the charging companies will apply for. With chargers needed in various settings, from shopping areas to business office centers to fleet maintenance hubs, the suppliers will each have a case to attract those investment dollars. Blink Charging has been aggressively working to expand its base and has announced deals to deploy its charging ports at businesses as diverse as hotels, healthcare complexes, and even municipalities. EVgo recently announced it expanded its partnership with General Motors, adding plans for 500 DC ports that will bring the total program to 3,250 units by 2025.

And ChargePoint isn't the only one that has increased guidance recently. EVgo saw its sequential quarterly revenue grow 29% in its third quarter, due to both its fleet and retail segments. That prompted the company to boost 2021 revenue guidance by as much as 10% at the high end of its range of $20 million to $22 million.

Wallbox is the newest of this group to be publicly traded, listed in early October. It is also a more recent entrant into the U.S. having only expanded its operations there in 2019. The company's revenue grew 250% year over year in its third quarter, but less than 10% of its sales were in the U.S. Wallbox expects revenue of $79 million for its full-year 2021, thanks in part to strong growth in Germany, France, and the U.K. It also has a partnership with solar panel company SunPower to integrate solar panels and home EV charging into a single bundled unit.

So while ChargePoint is a leader and formidable competitor, it's not the only game in town. And this game is not even out of the early innings yet. Investors may be better off spreading their investment dollars to account for the various potential outcomes as EV sales and the associated charging infrastructure mature as businesses.

A lot of good options to choose from

As the charging industry grows and becomes more commoditized, it could be difficult for new players with less capital to enter the space. As ChargePoint keeps growing, it should be able to flex its size as an advantage over smaller companies. Despite its favorable position, some investors may find it better to go with a basket of EV charging stocks, which ChargePoint can be a part of. No matter your personal preferences, both contributors agree that it's a good time to invest in the EV industry.