A market-beating performance is usually the sort of thing investors want to see in a prospective purchase. But how much is too much? The bigger the gain, the greater the potential for a profit-taking-fueled pullback.

With that as the backdrop, here's a rundown of three of the market's hottest stocks -- as measured by raw performance -- since the quarter began in October. As intimidating as these gains may be, that doesn't necessarily disqualify these companies as new picks for your portfolio. 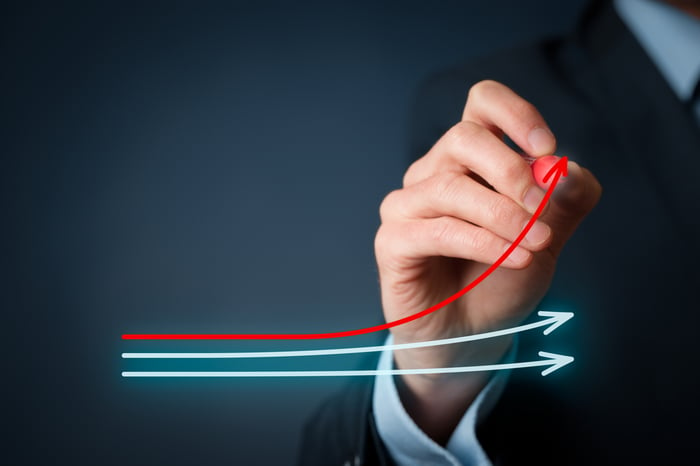 It's been a big year for the electric vehicle (EV) industry as well as for the stocks associated with it. Lucid Group (NASDAQ:LCID) has been no exception. After going public via a special purpose acquisition company (SPAC) deal and then seeing that stock soar (then crash) in the wake of the development, shares of this outfit finally found their groove beginning in mid-October. The company's first-ever deliveries of battery-powered vehicles account for most of the huge stock-price advance.

Still, the euphoria has pushed the stock to a wild valuation. Looking past this year's inaugural revenue and instead looking toward the $1.74 billion top line analysts anticipate for 2022, this still-in-the-red outfit sporting a market cap of $77 billion is valued at a stunning 44.5 times its projected revenue.

For perspective, the S&P 500's current price/sales ratio stands at 3.2

It may not be quite as crazy as it seems on the surface. Investors clearly believe that this company, like so many before it, will grow into its currently frothy valuation, particularly now that EVs are fully mainstreamed even if they're not yet widely owned. The fact of the matter is, however, that all of these buyers are aiming at a long-term target they just can't see.

Buy or wait? It's not the sort of holding you can step into with the intention of not keeping tabs on it on a daily basis. It's not even the kind of stock most of the buy-and-hold blue-chip crowd needs to consider, even if they are willing to check in on it on a regular basis. For the more active speculator though, right now, the 50/50 risk is fairly balanced by the potential reward.

In case you didn't know, Roblox (NYSE:RBLX) is a video game platform. Players can create their own gaming environment, in fact, and then allow other gamers to play in that particular virtual world. These world creators can even charge those other players for online access to their unique version of the game!

While the Roblox game and platform itself has been around since 2006, the stock's relatively new. The company only completed its IPO in March, and though it's been a good performer since then, the bulk of its gain to date has only materialized since earlier this month when the company announced its earnings topped third-quarter estimates.

Roblox ramped up its popularity during the pandemic as kids were stuck at home looking for things to entertain themselves with. As it turns out, kids are still playing plenty despite returning to school during the quarter in question. Game-play sessions improved by 28%, more than doubling revenue. That's impressive engagement considering that the platform has been around for 15 years; fickle gamers tend to forever be on the hunt for something new.

Buy or wait? As is the case with Lucid, reasonable investors rightfully expect to pay a stiff premium for Roblox. It doesn't entirely matter, though, since the company's backstory is likely to continue broadly supporting this premium despite the recent run-up ... the difference between investing and speculating.

Still, even by speculative standards, the risk of a near-term pullback seems a bit too high right now. What started out on Monday as another strong daily gain quickly turned into a loss. This sweeping reversal is a subtle hint that many of the recent buyers stand ready to lock in their profits and drive the stock lower as a result. Better to wait for a pullback if you're eyeing a trade here.

Finally, share prices of car rental company Avis Budget Group (NASDAQ:CAR) are currently up 163% since the end of the third quarter, with most of that gain being made in one day. The stock jumped 108% on Nov. 2 after the organization released solid third-quarter numbers in addition to announcing it would be adding a bunch of EVs to its fleet of rental cars; the latter appeared to be more of a catalyst than the former. Shares cooled off for a few days after that, but have been heating up again since the middle of the month.

As enticing as the action might be, there's a big asterisk next to it -- the huge one-day gain is mostly the result of a short squeeze, which is the forced buying of the stock from panicked short-sellers who want to cut their losses. That's because it's not necessarily a hint that this company has suddenly proven its mettle.

Buy or wait? Credit has to be given where it's due. Avis Budget Group is coming out of the pandemic with a vengeance. Last quarter's net income and earnings before interest, taxation, depreciation, and amortization (EBITDA) were both record-breaking, boosted by a modest recovery in travel. While the short squeeze resulted in exaggerated bullishness, shares were already marching higher in anticipation of confirmation of this recovery. The rekindled rally that's taken shape in the meantime is rooted in the same, regardless of the prospects for another short squeeze.

That's the long way of saying Avis shares are a speculative buy here, even with the recent, overheated gains setting the stage for what could be a wave of profit-taking. Just keep it on a short leash, so to speak.