Shares of electric car powerhouse Tesla (NASDAQ:TSLA) jumped by 2% through 9:45 a.m. ET Tuesday in early trading on the Nasdaq -- then lost it all, and then some. By 11:17 a.m. ET Tesla stock was in negative territory, trading down by more than 2%. 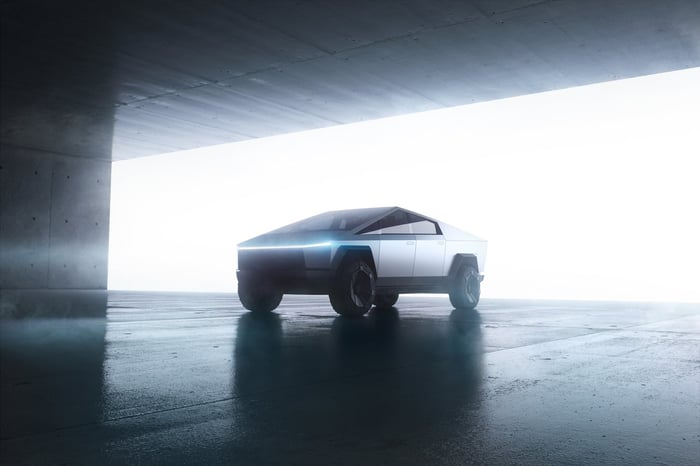 Given how much news this automaker makes, there are a number of potential explanations for its stock price moves. China's CNEVPost, for example, reported Tuesday that Tesla will soon begin deliveries of the Performance version of its Model Y crossover EV in China, which will give a boost to its sales numbers in that country.

Elsewhere, The Austin Business Journal reported that Tesla is on track to begin construction of a $1.1 billion, 4.28-million-square-foot production facility in Travis County, Texas, by the end of this year.

But if you ask me, the news story that best explains both Tesla's pop and its drop early Tuesday can be summarized in just one word: Cybertruck.

As the EV-focused news site Electrek reported Tuesday, a tally of reservations Tesla has collected for its long-awaited Cybertruck electric pickup -- "long" awaited as in, Musk unveiled the prototype two years ago, but production still hasn't started -- shows that if and when production does commence, the company will have an $80 billion backlog to fill.

To date, Electrek says Tesla has booked reservations for 1.2 million Cybertrucks. That's more than twice as many vehicles as the company manufactured across all of its models last year.

That's a huge bonanza awaiting Tesla, assuming those folks who've reserved Cybertrucks actually buy them once they become available. And this, I believe, explains why Tesla's stock price took a U-turn after its initial run-up Tuesday morning. At last report, Tesla wasn't expecting to begin Cybertruck production before the end of next year. Meanwhile, rivals like Ford, General Motors, and Rivian are scaling up production of their own competing electric trucks.

The tardier Tesla is about delivering on its promise, the more of those 1.2 million reservations will melt away -- and the greater the risk will grow to Tesla's stock price.