Will either of these hopeful vaccine makers continue to thrash the market?

There may be a second wave of COVID-19 vaccines coming. With the hopes of widespread approval of each company's SARS-CoV-2 vaccine, Novavax (NVAX -1.80%) is already up nearly 90% year to date while Ocugen (OCGN -0.80%) is up over 300% in the same time frame. Each pharma's future is determined by decisions soon to be made by regulatory bodies and both stocks being down over 40% from 52-week highs. But which is the better buy now?

Patrick Bafuma: To begin, let's take a look at Novavax. First, it touted a hopeful vaccine for pandemic avian flu along with various other ailments like swine flu and RSV. Historically, Novavax has splashed onto the scene of almost every communicable disease crisis only to wither away and occasionally reverse split.  However, Ocugen is looking to get its first product on the market with serious promise. 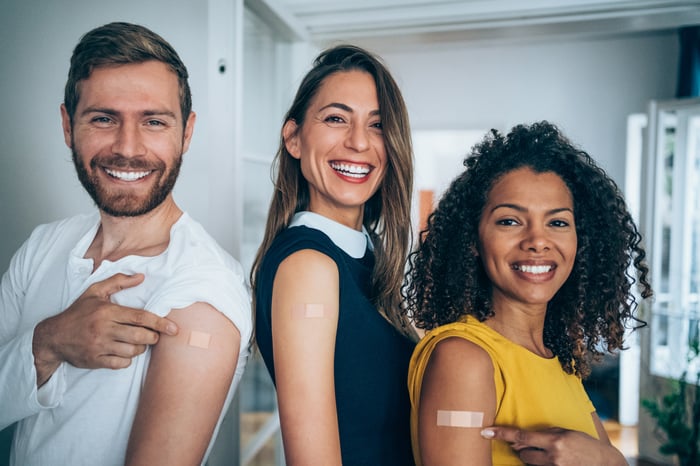 Covaxin, the $1.5 billion biotech's COVID-19 vaccine, might do better than people think. The company is seeking Emergency Use Authorization in the U.S. for patients aged two to 18 years old after demonstrating 93.4% efficacy in adults against severe COVID-19 disease in a phase 3 trial. Also, Covaxin can be kept refrigerated for up to two years, and a whole three months at room temperature. These are significant improvements from the Pfizer and Moderna mRNA vaccine, which has a one-month shelf life in the refrigerator.

With the wide U.S. market for COVID vaccines, there's room for Ocugen. And Covaxin's efficacy and ease of storage make me suspect it can garner enough market share to be worthwhile to shareholders if approved.

In addition, Ocugen currently has a gene therapy, OCU400, in the pipeline. OCU400 seemingly restores vision loss with a severe retinal degeneration disorder with no other treatments. As part of its Investigational New Drug Application filing earlier this month, patients will be observed for at least 12 months in the proposed phase 2/3 clinical trial. While we have some time to wait for results, this backup plan appears superior to Novavax's pipeline of vaccines that failed in previous trials.

Keith Speights: Novavax let investors down earlier this year with multiple delays in filing for authorizations and approvals of its COVID-19 vaccine candidate NVX-Cov2373. But that's all in the past. The company is off to the races now.

Novavax awaits regulatory decisions for its vaccine in the U.K., EU, Canada, New Zealand, India, and South Korea. It's already won Emergency Use Authorization (EUA) in Indonesia and the Philippines. The company expects to file for U.S. EUA before the end of this year.

I fully expect Novavax will pick up authorizations or approvals in all of these markets. That will put the company on track to generate around $4.8 billion in 2022 based on the consensus analysts' estimate.

There are several reasons I think Novavax is a better pick than Ocugen. Probably the most important, though, is that Novavax has full rights to its COVID-19 vaccine whereas Ocugen only has a license to Covaxin for the U.S. and Canada. My view is that Novavax could gain momentum around the world before Ocugen can even reach the market in one country.

While our contributors may differ on which vaccine maker is a better investment, they both agree that if these companies win widespread approval, there is still significant growth to be unlocked. However, having hopes attached to a single therapeutic can be risky. As such, Novavax and Ocugen are likely to face extreme volatility after upcoming approval meetings with governing bodies. Plus there are future earnings reports to see if these late-to-market vaccines even sell in the face of Pfizer and Moderna's competition.

If healthcare investors are unsure about these two former penny stocks, it's certainly acceptable to wait to see how things develop with time. If you feel an urge to get in now, it might be prudent to take a basket approach to diversify risk while attempting to capture the potential upside of what could be the next blockbuster vaccine.