Plug Power (PLUG 3.19%) shares popped on Wednesday, rising 1.8% as of 1:25 p.m. ET on Nov. 24. after the hydrogen fuel-cell specialist bagged yet another order and announced growth plans for Europe. Plug Power is clearly on a roll as far as investments into growth are concerned, and that has investors in the renewable energy stock excited.

On Nov. 24, Plug Power announced an order for a 100-megawatt (MW) electrolyzer from Abu Dhabi-headquartered chemicals giant Fertiglobe to produce green hydrogen as feedstock for an ammonia production plant in Egypt.

Fertiglobe, the world's largest seaborne exporter of urea and ammonia combined, said it chose Plug Power for its largest green ammonia project because of its leadership in electrolysis technology. 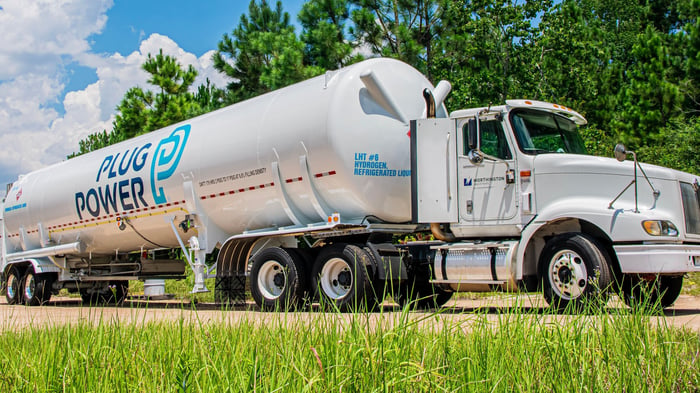 Importantly, this is a pretty big order given that Plug Power last outlined a goal to sell over 100 MW in electrolyzer sales by 2022, during its annual analyst day held in mid-October. Electrolyzers can produce hydrogen that can then be stored for later use as a fuel to power stationary fuel-cell systems, or for industrial uses like food hydrogenation and semiconductor fabrication, or even at hydrogen fueling stations in the transportation sector.

In yet another development today, Plug Power said it set up its European headquarter in the Port of Duisburg, North Rhine-Westphalia, Germany. As the world's largest inland port, Duisburg will offer Plug Power direct connectivity to important markets like Belgium, Rotterdam, Antwerp, and the Netherlands, and therefore help it expand rapidly in Europe. Plug Power plans to set up a 70,000 square-foot facility, complete with on-site electrolyzer production facility, engineering labs, innovation centers, and technical centers, with provisions for further expansion as required.

For that matter, Plug Power entered Europe more than decade ago and has multiple partnerships in the region.

Although Plug Power has signed multiple deals in recent weeks, its order from Fertiglobe is a meaningful one. With the company also recently delivering record quarterly revenue, raising its outlook for 2022, and projecting annual sales worth $3 billion for 2025, investors continue to remain excited about Plug Power's prospects.