The bigger question is why Ballard Power is going up even more.

Shares of fuel cell pioneer Plug Power (PLUG -5.94%) jumped out of the gate on Monday, opening 4.1% above Friday's close at 9:30 a.m. ET, before starting to wobble lower. At the same time, rival fuel cell operator Ballard Power Systems (BLDP -2.96%) jumped 3.6% at the open, and -- in fits and starts -- proceeded to move even higher.

That doesn't make much sense, though. 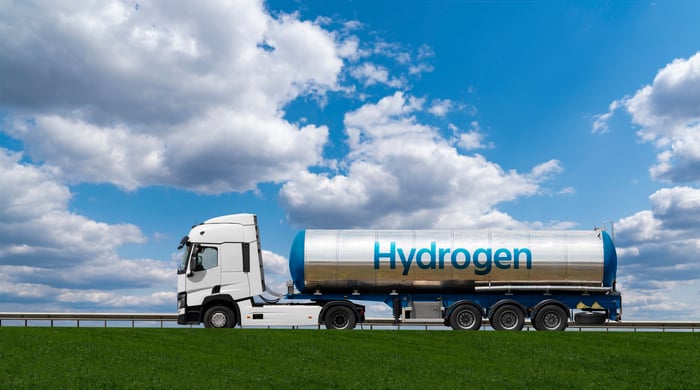 You see, over the weekend, investment bank Citigroup recommended a "pair trade" of both these fuel cell stocks, suggesting that investors should sell Ballard Power shares (rating them underweight) and use the money to buy shares of Plug Power instead.

As the analyst explained in a note covered by TheFly.com, Ballard is suffering from disappointing sales in China, and its focus on heavy-duty applications for fuel cells (such as powering trains and buses) isn't expected to see widespread adoption before 2023 or later. In contrast, the analyst thinks Plug's "hydrogen ecosystem" approach, in which the company both produces hydrogen fuel and also the fuel cells to use that fuel, will pay off for Plug more immediately.

Crazily, though, while Plug stock initially ran higher than Ballard on Citi's assessment, you'd actually more likely expect to see Plug score gains while Ballard stock lost ground on news of this sort. Instead, not only is Plug rapidly giving back its gains, but Ballard Power is currently doing even better than Plug.

Why is this happening? Honestly, I can only explain about half of the dynamic. On Friday, Plug Power jumped more than 10% after analysts at a different investment bank -- Morgan Stanley -- raised their price target on the shares by more than 50%. In contrast, Ballard stock only inched up 1% or so on Friday.

The only logical explanation for this seems to be that Plug investors are using today's positive Citi news as an opportunity to cash in some of their winnings from Friday's Morgan Stanley note. Ballard investors, meanwhile, are simply making up for lost time -- hoping that Citi is wrong about their stock, and that the nice things Morgan Stanley had to say about fuel cells last week will hold true for Ballard as well as for Plug Power going forward.