General Electric (NYSE:GE) made news recently when it announced its intent to split itself into three companies focused on aviation, healthcare, and energy, respectively. Investors cheered that plan, as well as the conglomerate's efforts to improve its balance sheet. But GE stock hit a speed bump Friday after news broke Thursday that a new and potentially concerning variant of COVID-19 has been found.

Fears about what this latest evolution of the coronavirus could mean sent GE stock down by 6.2% as of 11:04 a.m. ET. At the same time, airline stocks including United Airlines Holdings (NASDAQ:UAL) and Spirit Airlines (NYSE:SAVE) were down 12.6% and 11.8%, respectively.

GE's aviation business is its largest segment, and investors are worried that the rebound in travel could be impacted by the spread of a new COVID-19 variant that is resistant to the currently available vaccines. In the first nine months of 2021, GE's aviation segment revenue exceeded $15 billion. In just the third quarter, orders grew 70% year over year to almost $7 billion as its commercial engines and commercial services sales returned to substantial growth. Now, though, the rebound of the commercial airline sector is again in question. 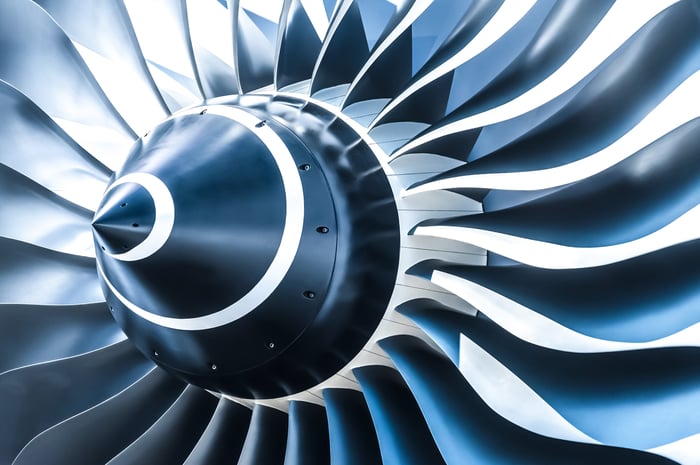 World Health Organization officials are meeting Friday to discuss the new COVID-19 strain, currently known as B.1.1.529. It was discovered in South Africa, but has also been found in European, Middle Eastern, and African nations. Some countries, including Israel, have already implemented travel restrictions due to the new strain, which scientists say has more than 50 mutations from the original. That is raising concerns that it could be more contagious than the delta variant, and that the current vaccines could be less effective against it.

This news comes just as Transportation Security Administration data showed that the number of travelers moving through U.S. airports around 2021's Thanksgiving holiday had almost reached 2019 levels. Airlines like United and Spirit are counting on that bounce back in travel. GE's aviation segment also needs airlines to get back to profitability and growth to support its jet engine sales.

In addition to its preparations to restructure itself into a trio of separate public companies, GE has also been working to improve its balance sheet. On Friday, the company said it has agreed to buy back about $25 billion in debt tender offers the company announced it would pursue on Nov. 10.

That's more than it initially planned, and the company said that the move will bring its gross debt reduction since 2018 to $80 billion. GE also said that it is on track to hit its overall deleveraging targets, and expects to achieve a free cash flow margin in the high-single-digit percentages in 2023, based on its current business segment portfolio. But investors Friday are wondering if the new COVID-19 variant may create a headwind for GE by hindering the recovery of the commercial airline industry.