Semiconductor giant Intel (NASDAQ:INTC) has suffered some rare miscues in recent years. The company's traditional lead in manufacturing technology turned into an uphill battle in 2017 when the 10-nanometer (nm) production process was delayed by a full generation cycle of two years. Intel's stock has barely moved in the last four years, gaining just 9% while the S&P 500 (SNPINDEX: ^GSPC) market index posted a 70% increase.

At the Credit Suisse Technology, Media, and Telecom Conference this week, CEO Pat Gelsinger took the stage to concede that his company has struggled but also to make it clear that Intel is on track to recover and thrive.

A quick primer on Intel's situation

Gelsinger took Intel's CEO office in February this year, topping off a long career at the company where he was the chief architect of the 486 processor in 1989. He quickly pledged to rejuvenate Intel's company culture and get the manufacturing technology back on track to compete with current market leaders Taiwan Semiconductor Manufacturing and Samsung.

Intel investors have been shrugging off Gelsinger's promises. Shares are trading at a measly 9.4 times trailing earnings and 5.3 times free cash flow today. You won't find another large-cap semiconductor company with a P/E ratio below 12. Talk is cheap, and Intel needed to show some concrete progress in order to be taken seriously again. 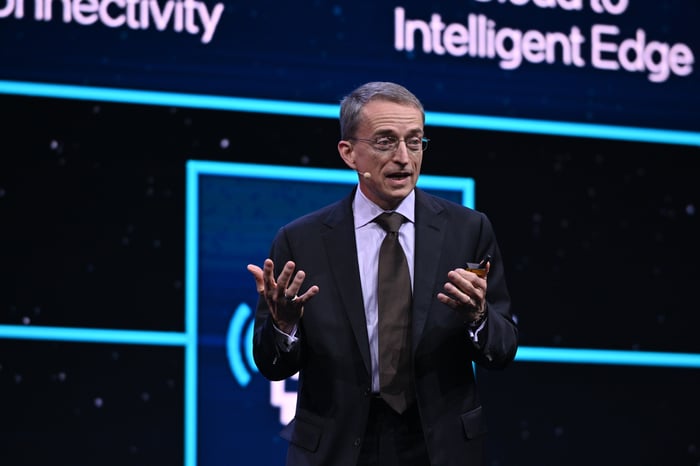 At this week's conference, Gelsinger admitted that you can't make up for several years of "bad execution" in just a few months. At the same time, he said he had a lot of evidence to back up his claims that the struggling manufacturing operation is healthy again.

Intel is getting back into foundry operations after a long period of keeping its manufacturing advantages close to the vest. One of its first customers is mobile chip giant Qualcomm (NASDAQ:QCOM), whose global scale is comparable to Intel's own. Gelsinger said Qualcomm is a very selective customer, and the company wouldn't give the contract to Intel unless the manufacturing process was up to par.

"You don't get a design like that arbitrarily," he said. "They take us and our technology teams through our paces to be able to say, 'Yes, we're going to start using that as a foundry customer in the angstrom era.'"

Pride (in the name of silicon)

The company has a long history of game-changing innovations, which makes it all the more unpleasant to experience several years of mishaps and poor management decisions. Now, Gelsinger said, Intel's engineers are "working for their pride:"

Every major innovation that's happened in semiconductor transistor technology for the last 30 years came from this team. They screwed up big time. They are now back to restore their honor in the marketplace. They are so fired up. If I told them they had to take a day off, I couldn't get them to do it. It just is impossible at this point because we said we are betting on them big time.

Sure, that sounds a bit like locker-room pep talk at halftime in a losing playoff game. Then again, maybe that's exactly what Intel needs right now -- a CEO that takes personal pride in the company's culture of innovation and wants to infuse that attitude into the whole organization.

Is Intel stock a buy today?

Intel is spending more than $25 billion to boost its manufacturing plants over the next couple of years, installing next-generation technologies such as extreme ultraviolet (EUV) lithography systems and 3D packaging tools. It's an expensive strategy but it also sets Intel up for great returns on that big investment in the long run. You have to spend money to make money. Having a market-leading manufacturing platform will do wonders for the third-party foundry business, and will also give Intel's own products the performance and low-cost production advantages they used to enjoy before 2017.

Nothing ever comes easy in the cutthroat semiconductor industry but Intel really does have solid evidence that the manufacturing operation is getting back to full health -- and then some. This stock doesn't deserve a bargain-bin valuation, and Gelsinger's actions should fuel market-crushing shareholder returns as the recovery plan plays out. That pep talk makes me want to buy more Intel stock while the shares are trading at an unreasonable discount.