It's been a few weeks now since Facebook announced its name change to Meta Platforms (NASDAQ:FB), which will officially make a ticker change to "MVRS" early next year. The company is clearly signaling to investors and employees that its future isn't just in social media but also in building the metaverse.

There's a lot of debate about what exactly the metaverse is and what devices and platforms it will involve. At the very least, it's a new paradigm for technology beyond the smartphone/social media-driven world we have today. But will Meta be the one to bring the metaverse to the world, or will it face challenges that have dogged big tech companies for decades? 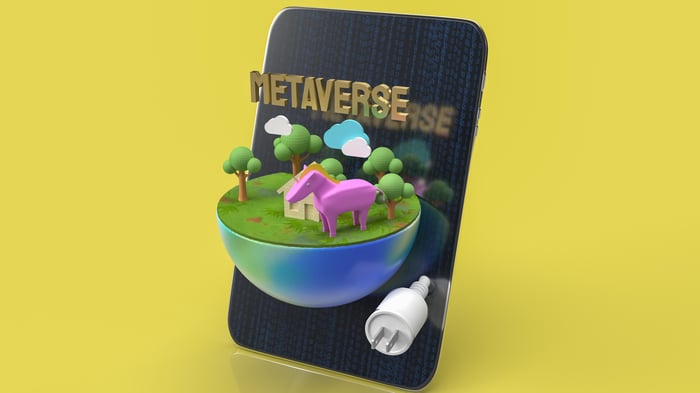 Large companies like Facebook have seen big technology and strategic disruptions coming in the past. Seeing disruption and participating in it are two different things, and big tech stocks typically have a hard time reshaping for the future paradigm even if they anticipate it.

What's hard, and sometimes impossible, is completely realigning your company to take advantage of the next paradigm without giving up on the core culture and beliefs that make a company successful in today's paradigm. For example, IBM (NYSE:IBM) saw the personal PC revolution coming and attempted to dominate the space. But it couldn't do it alone and chose to outsource the operating system for its computers to Microsoft (NASDAQ:MSFT), which ultimately led to Microsoft being a tech giant and IBM fading into the background.

Will Meta be able to rewire some of what it's learned about building a social media and advertising giant in order to become a metaverse-first company?

Facebook's demographics may not fit the metaverse's early adopters

Let's face it, Facebook's user base skews older than the average early adopter of technology like that which will enable the metaverse. According to Statista, in the U.S., 53.3% of Facebook's users are 35 or older. Compare that to Snap's (NASDAQ:SNAP) Snapchat, where only 34% of users are 36 or older.

Meta, of all companies, knows that early users are the ones who set the groundwork for greater and more profitable usage in the long term. Facebook started on college campuses and is now widely used by all generations of users. But without that young early adopter cohort, the business wouldn't have survived.

The companies and people building in AR/VR/Web3/Crypto that will create the metaverse infrastructure and the users of these services tend to follow the same demographics Facebook started with. They're young and looking for disruptive opportunities. When it comes to constructing the metaverse, building on top of one of the most valuable companies in the world seems like a stretch.

Facebook's business may not translate to the metaverse

The biggest challenge Meta likely faces is that its core principles and business may not translate well to the metaverse. From a principles standpoint, Facebook has been built on the idea that all connections are good and therefore more connections are necessarily good. The Facebook app is at the center of these connections around the globe but Instagram and WhatsApp follow the same principle.

It's not likely that the "more connections is good" mantra will translate well to the metaverse. When users have digital embodiment will they want comments from embodied strangers or will smaller networks or ecosystems be better? In that sense, the social graph of a company like Twitter, which is a curated list of people users chooses to follow, or clubs that users choose to belong to or buy into may be a better way to look at connections in the metaverse than Facebook's. The Bored Ape Yacht Club NFTs are a great example of this, creating a "club" that investors are willing to spend millions of dollars to join because it's exclusive and decentralized.

As such, Facebook's social networks, which are closed to the outside world, may not be as desirable in the next paradigm. Individuals can't take their Facebook profile to Microsoft or to their iPhone or into their Ethereum wallet. If the point of the metaverse is to be interoperable, which CEO and Founder, Mark Zuckerberg has discussed at length, there's nothing to indicate that a centralized company like Facebook is the right company to build that platform.

Meta's economic interests may not be built for the metaverse, either. Facebook makes its money on ads; will people want ads in the metaverse? We know that Oculus is already testing ads in VR headsets, so porting the same business model to the metaverse is currently being tested.

Can Meta succeed where other tech giants failed?

The mistakes tech companies have made in the past, often come down to trying to transfer what makes a company successful in a current paradigm into a new paradigm. But the new shift often requires fresh thinking. It's questionable whether Meta's skills and culture match what's needed for the metaverse.

If anyone can steer Facebook's ship into truly being Meta, it's Zuckerberg. However, I have my doubts that even a great founder can dominate the metaverse in the way he hopes to.