Black Friday might have seen its first-ever year-over-year decline in online sales this year, but a handful of online shopping companies still saw a big boost. Sales for online retail on the day after Thanksgiving fell slightly to $8.9 billion this year, according to data from Adobe. With promotions starting earlier in the season and supply chain issues reducing the number of discounts on in-demand items, shoppers didn't flock to the digital store shelves on the shopping holiday.

But a lack of discounts may have greatly benefited companies offering buy now, pay later (BNPL). Sales through BNPL programs increased a whopping 422% from 2019 levels. Here are the companies at the forefront of the trend. 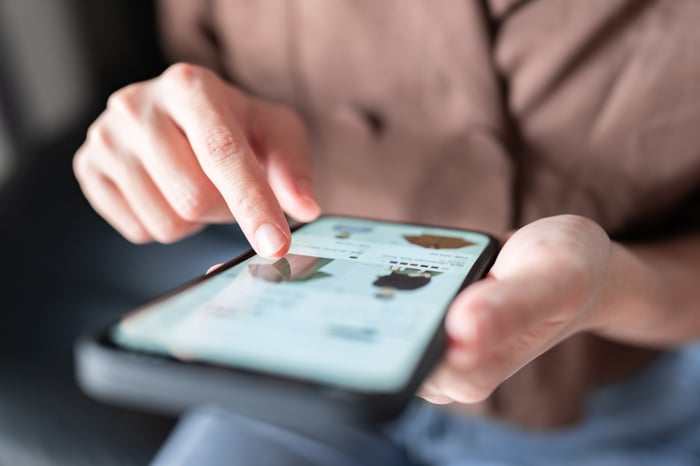 Affirm (NASDAQ:AFRM) is one of the earliest fintech companies to start offering buy now, pay later as a third-party service for merchants. A key partnership with Peloton gave it a springboard to attract new merchants, including a recent deal with Amazon.

Over 40% of Affirm's loans come with 0% financing. Instead of charging interest, it charges the merchant a fee to handle the process of collecting payment. That fee is much higher than fees charged by other payment processors such as PayPal (NASDAQ:PYPL), as evidenced by Affirm's 10% revenue margin on gross merchandise volume.

Affirm's revenue mix is evenly distributed across several industries, giving it well-diversified exposure. It counts just over 100,000 merchant partners, but that pales in comparison to PayPal's 33 million. That said, the number is growing quickly. It had just 6,500 merchant accounts this time last year, and 29,000 at the end of June.

Investors looking for a pure play on the BNPL trend should give Affirm stock a closer look.

PayPal introduced its buy now, pay later product, "Pay in 4," last August, and it's grown rapidly since. PayPal now offers the service in five countries with two more soon to come. It counts customers using BNPL with 950,000 merchants, and 65,000 merchants have already positioned the installment offer upstream, ahead of the checkout page.

PayPal's product currently faces a few limitations, though. First, it only offers relatively small loans, maxing out at $1,500. Second, its loan terms require the customer to pay back the loan over six weeks with one payment every two weeks. PayPal is working on offering longer terms starting next year.

PayPal does have some advantages as one of the most widely used digital wallets in the world. As mentioned, it already has 33 million merchant partners. Customers are able to use its BNPL service anywhere that accepts PayPal. It can also easily work with merchants to move the offer upstream to promote Pay in 4. Additionally, it has much more data on its users' finances and purchasing behavior, which it can use to make better lending decisions.

Unlike Affirm, however, PayPal's margins on BNPL are very low. It doesn't charge merchants anything extra, and it doesn't charge consumers interest. The goal for PayPal is merely to increase payment volume, which it's done well so far.

Block (NYSE:SQ) -- the company formerly known as Square -- isn't exactly in the BNPL market right now, but it could be very soon. It announced the planned acquisition of Afterpay (ASX:APT) in August, and shareholders approved it in early November.

Afterpay is already a heavyweight in the BNPL space. It counts around 100,000 merchant partners and generated AU$22.4 billion (about $16 billion) in gross merchandise volume over the past year. It also boasts a relatively wide revenue margin of underlying sales of 3.9% compared to legacy fintechs like PayPal, which had a take rate of less than 2% of payment volume in the third quarter.

What Block can add to the package is 70 million Cash App users and millions of merchants using its platform both in-store and online. Block is adept at cross-selling its services and could fuel strong adoption of the relatively high-margin service. Furthermore, this pushes it further toward its goal of connecting its Seller and Cash App ecosystems.

All of these fintech stocks are currently suffering at the hands of macroeconomic headwinds. Meanwhile, the consumer trend toward using their services remains strong. As such, this could be a good investment opportunity, as the stock prices have pulled back significantly from summer highs for all three of the above companies.