Polestar, the electric-vehicle "start-up" owned by Volvo Cars and Chinese automaker Geely Automobile (OTC:GELYF), said on Dec. 2 that it expects to deliver about 29,000 vehicles in 2021 -- and it expects sales to rise to about 290,000 vehicles per year by 2025.

Speaking at an event for analysts and media in New York ahead of the company's planned stock market debut next year, Polestar CEO Thomas Ingenlath also shared the first images of the company's third model, a sporty electric SUV called the Polestar 3, and confirmed plans to rapidly expand its dealer network.

What Polestar said at its New York event

Ingenlath said that the new model will "in time" offer autonomous highway driving using advanced lidar sensors from Luminar Technologies and Nvidia computer processors. Production of the Polestar 3 will begin next year at a Volvo Cars assembly plant in South Carolina. 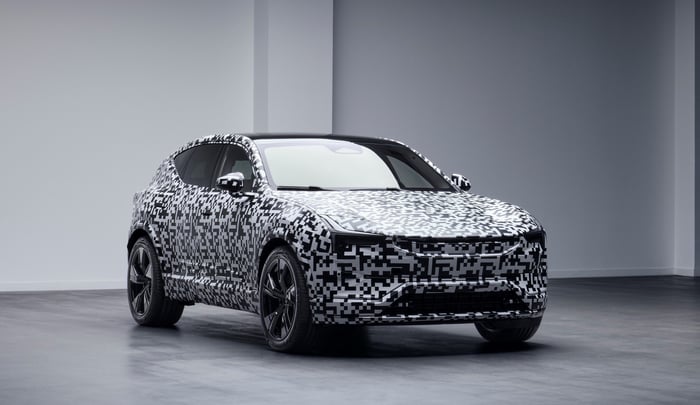 Ingenlath also said that Polestar is working to rapidly expand its U.S. dealer footprint, and he expects the number of U.S. dealers to double over the next two years. (In the U.S., Polestars are sold through select Volvo Cars dealerships.)

The company is also developing its own unique electric-vehicle architecture, he said. Current Polestars are based on platforms shared with Volvo Cars.

Polestar isn't public, but it will be soon

Polestar is a relatively new company, but it's not a from-scratch start-up (hence the quotes around "start-up" above). Polestar is essentially a Volvo spinoff; taking its name from Volvo Cars' former performance sub-brand, the Polestar company was founded in 2017 as a joint venture between Volvo Cars and Geely, its corporate parent.

The company's first two models, a high-performance hybrid sedan called Polestar 1, and a fully electric crossover called Polestar 2, are already on roads in North America, Europe, and Asia. Reviews have been strongly positive and both are well-regarded. The company delivered about 10,000 vehicles in 2020.

Polestar plans to launch three more battery-electric models by 2024, including the Polestar 3 due next year and a sleek high-performance luxury sedan called the Polestar 5 in 2024. 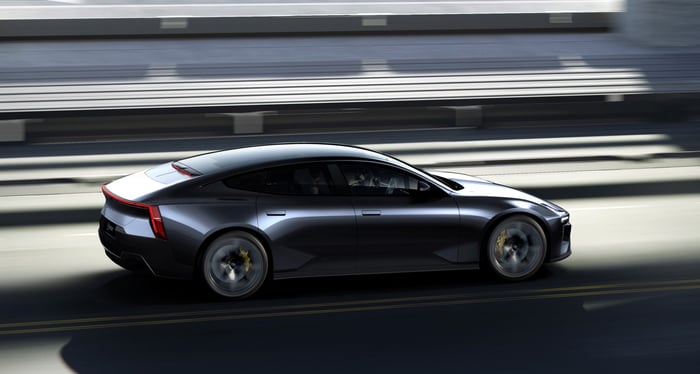 Coming in 2024: The Polestar 5, an electric high-performance luxury sedan based on the popular Polestar Precept show car. Image source: Polestar.

Soon, investors will be able to ride along. Polestar said in September that it has agreed to go public in the first half of next year, via a merger with special-purpose acquisition company (SPAC) Gores Guggenheim (NASDAQ:GGPI).

The deal follows the format of other SPAC merger deals we've seen in the electric-vehicle space over the last couple of years, in that it includes cash raised by the SPAC itself in a public offering as well as an additional fund called a "PIPE" (for "private investment in public equity") funded by third-party investors.

Both Volvo Cars and Geely are expected to retain substantial stakes in the post-merger company.

"We are not a virtual company waiting to build factories and sell cars," he said. "We are an actual company, already building and selling cars around the world. Our two award-winning cars are on the road in 14 markets globally and we expect our global sales volume to reach around 29,000 vehicles this year."

"From here on in, Polestar is all about growth," he said.