The electric vehicle (EV) industry is heating up as battery technology improves and governments introduce favorable policies to reduce carbon footprints. But with many leading companies trading at astronomical valuations, investors may struggle to tap into the long-term opportunity. Ford Motor (NYSE:F) bucks the trend. Let's explore why its industry-leading brands and dirt-cheap valuation make it a top stock to buy in December.

Accounting firm Deloitte expects global EV sales to surge at a compound annual growth rate (CAGR) of 29% to 31.1 million units by 2030 (32% of all new car sales). Ford has turned this trend into an opportunity to reinvent itself, committing $30 billion to make 40% of its sales electric by the end of the decade. And while Ford isn't the only legacy automaker going electric, it sets itself apart through its more streamlined approach to the opportunity. 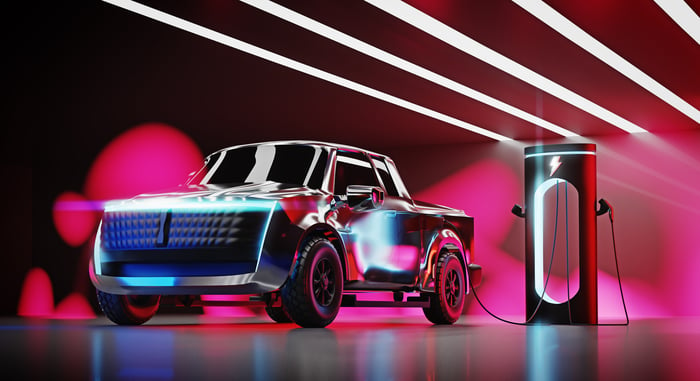 How so? Well, unlike General Motors and Tesla, which are building a diverse lineup of EV models that includes sedans, Ford will focus on segments it already dominates, such as the F-150 truck, transit vans, and Mustang sports car (now adapted for a crossover SUV).

Ford's niche strategy will help it take advantage of its well-established brands, economies of scale, and potentially higher profit margins. Analysts at Morgan Stanley estimate that the F-150 alone is responsible for a jaw-dropping 90% of Ford's global profits ($2.9 billion over the trailing 12 months), and the automaker may make its pickup trucks the cornerstone of its EV business as well.

Strong brands give Ford the edge

Upstart automaker Rivian, which recently went public, also sees the potential in electric utility vehicles. And like Ford, it plans to focus on this lucrative niche through its R1T pickup truck and R1S SUV. Further competition comes from Tesla, which plans to begin its Cybertruck sales in 2022.

But Ford has an edge over these rivals because its F-150 has been America's best-selling pickup truck for 43 years in a row and remains the top-selling vehicle (in any category) in most U.S. states. This unparalleled brand power gives Ford a committed consumer base to launch new electric models, such as the 2022 F-150 Lightning.

Ford also enjoys supply-chain advantages because its electric trucks will likely use many of the same parts and panels as their gas-powered counterparts. Spare parts availability may also make Ford's trucks easier to repair and more practical for consumers -- especially compared to Tesla's Cybertruck, which is expected to use a unibody steel exoskeleton. How is your local body shop supposed to fix that after a fender bender?

On top of these competitive strengths, Ford's biggest advantage comes from its valuation. With a market cap of $79 billion, its stock trades for just 9.5 times forward earnings. This valuation is significantly below that of Rivian, which boasts a market cap of $100 billion despite generating no material revenue or profits in its most recent quarter.

For context, Ford sold 14,062 electrified vehicles in October alone while Rivian has only delivered 156 R1T pickup trucks (mainly to its own employees) as of October.

Investors seem to be holding Ford's internal combustion engine business against it, giving the company a lower valuation than pure-play rivals like Rivian. But Ford's legacy operations are actually a potential advantage that it can leverage to dominate the EV opportunity through its industry-leading brands and economies of scale. It isn't too late for investors to bet on the stock while it is still cheap.