GlobalFoundries (NASDAQ:GFS) continues its surge. The one-time foundry division of Advanced Micro Devices spun off as a separate company in 2009 and launched its initial public offering (IPO) in October.

Now, with the huge increase in the stock price, investors may wonder whether they waited too long to buy. Let's take a closer look at this semiconductor stock to see if the investment case for the stock still stands. 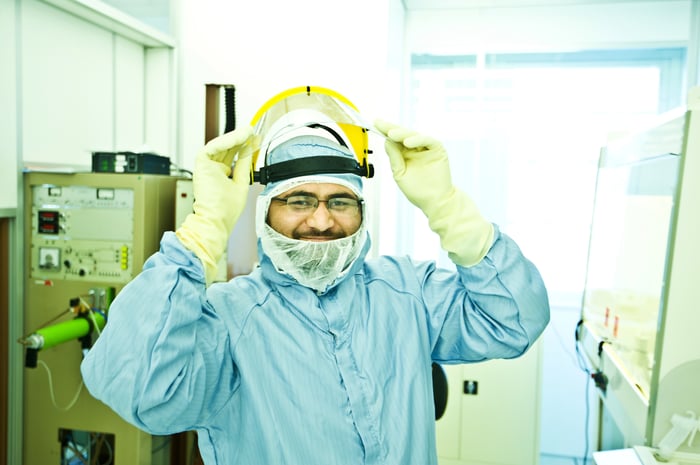 GlobalFoundries and its stock

GlobalFoundries, based in Malta, New York, is the fourth-largest foundry in the world. According to TrendForce, it claims approximately 6% of the foundry market and produces chips for a variety of purposes, including mobile devices, PCs, the Internet of Things, and communications. It also claims AMD, Qualcomm, Skyworks Solutions, and other tech companies as some of its clients.

The foundry industry has benefited from a substantial chip shortage. To that end, GlobalFoundries has pledged to spend an additional $1 billion to expand capacity. Competitors such as Taiwan Semiconductor (TSMC) (NYSE:TSM) and United Microelectronics (NYSE:UMC) have also announced plans to boost production.

Moreover, the company recently signed a deal with Ford Motor Company. Such a deal is critical as the global chip shortage has hit the auto industry particularly hard, idling facilities as automakers wait on essential semiconductors. These shortages have boosted semiconductor stocks across the board, a likely factor in the company's decision to go public finally. GlobalFoundries launched its IPO on Oct. 28, offering over 63 million shares at $47 per share.

In its short existence, GlobalFoundries stock keeps soaring. At just over $66 per share as of the time of this writing, the stock has risen by just over 40% in just over one month of trading. 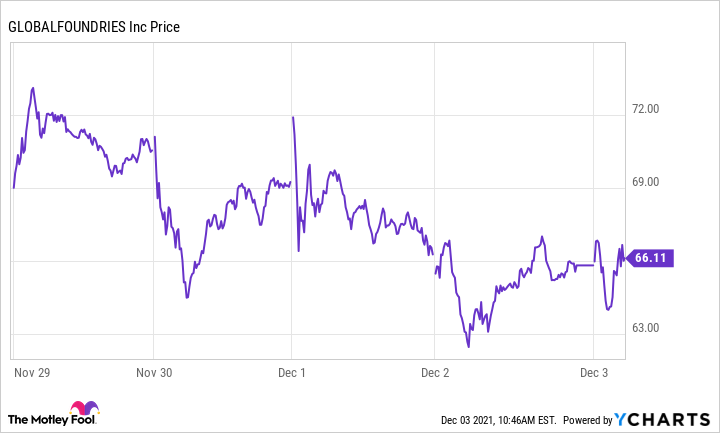 The earnings report may have confirmed investor inclinations to bid the stock higher. In its first earnings release on Nov. 30, GlobalFoundries reported that revenue came in at $1.7 billion, a 56% increase compared with the year-ago quarter. In 2018, the company embarked on a strategic change, hiring new management, refocusing research and development and capital expenditures, and bolstering customer relationships. Now with the current level of revenue growth, GlobalFoundries has begun to reap some of the benefits of these investments.

The revenue led to an adjusted quarterly profit of $34 million, up from a loss of $293 million in the same quarter last year. Limiting the increase in operating expenses to 15% helped the company turn profitable, even after paying $22 million in income taxes.

GlobalFoundries believes these increases can continue and has forecast fourth-quarter revenue at $1.82 billion at the midpoint. The company also predicts an adjusted net income between $50 million and $70 million in the upcoming quarter. Consequently, GlobalFoundries stock now sells at a price-to-sales (P/S) ratio of about 7. This places its valuation between that of its larger Taiwanese competitors, with TSMC trading at 12 times sales and UMC supporting a 4 P/S ratio.

GlobalFoundries has pulled off a successful IPO, and both massive revenue growth and a turn to profitability appear to confirm investor inclinations to bid the stock price higher. Also, despite a moderate sales multiple, the lingering global chip shortage should bode well for the stock's near-term prospects. As such, it is likely not too late to GlobalFoundries as an investment.

Both GlobalFoundries and its competitors plan substantial capacity expansions. This could lead to struggles for the stock once the shortage abates. However, with rising demand across the board for more chips, its long-term prospects appear promising.