Legendary investor Peter Lynch once offered this advice: "All you need for a lifetime of successful investing is a few big winners, and the pluses from those will overwhelm the minuses from the stocks that don't work out." Of course, no one likes to lose money, but not even the best investors are right all the time. Fortunately, stocks can only go down 100%, but there is no limit to the potential upside.

In fact, if you adopt a long-term mindset and build a diversified portfolio, some of those stocks will probably grow several-fold in value. And those monster returns will more than make up for your losses. With that in mind, I think Upstart Holdings (NASDAQ:UPST) and DigitalOcean (NYSE:DOCN) are well positioned to grow fivefold or more over the next decade, a pace that would turn $200,000 into at least $1 million. 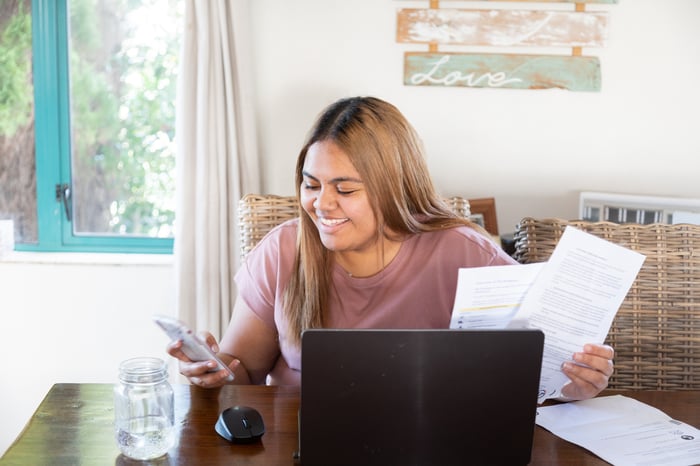 For over thirty years, financial institutions have relied on the FICO score -- a three digit number that considers just 12 to 20 variables -- in order to determine who qualifies for a loan and at what interest rate. But Upstart believes that outdated system often fails to accurately quantify risk. In turn, that means many borrowers pay too much for credit, while other creditworthy applicants are rejected without good reason.

Upstart is on a mission to make consumer credit more accessible. The company leans on big data and artificial intelligence, collecting over 1,600 data points per borrower, most of which are not considered by traditional credit models. For instance, Upstart captures signals like employment, educational history, and macroeconomic factors. The company then trains that data against 10.5 million repayments events (and counting). That means each time a borrower makes or misses a payment, Upstart's AI models get a little smarter, creating a network effect.

Case in point: Compared to traditional credit models, Upstart can approve 27% more borrowers with a 16% lower average interest rate, according to the Consumer Financial Protection Bureau. That's a compelling value proposition on both sides of the equation. Banks benefit by doing more business (with lower fraud and loss rates), while consumers benefit from greater access to credit at lower interest rates.

Of course, Upstart benefits, too. The company's top line is growing like wildfire.

Last December, Upstart had 10 banks on its platform when it went public. That figure has already tripled, but management still sees plenty of growth on the horizon. During a recent interview on CNBC's Mad Money, CEO David Girouard said, "I would be shocked in a couple years if we don't have hundreds of banks and credit unions on the platform."

Here's the bottom line: Upstart-powered loans totaled $8.9 billion over the last 12 months, representing just 1% of its $753 billion market opportunity. For that reasons, I think this $14 billion fintech company could grow fivefold or even tenfold in the next 10 years.

Cloud computing has fundamentally changed the IT ecosystem. Organizations can now access services like compute, storage, and networking through the internet, allowing them to build and scale applications quickly, without buying costly on-site hardware. However, cloud vendors like Amazon and Microsoft tend to target large enterprises, meaning their solutions are often too complex for small- and medium-sized businesses (SMBs) or individual developers.

That's where DigitalOcean comes in. Its platform democratizes cloud computing, making it possible to deploy infrastructure and platform services in minutes without specialized training. That means developers can quickly access the resources needed to build, secure, and monitor scalable applications. DigitalOcean also provides developer tutorials and 24/7 technical support to every customer, regardless of size.

Collectively, those qualities differentiate DigitalOcean, helping the company carve out a niche in the highly competitive cloud computing industry. As a result, its business is growing at a solid clip.

Looking ahead, management puts its addressable market at $116 billion by 2024 -- that's 290 times TTM revenue. More importantly, DigitalOcean's focus on simplicity is clearly resonating with customers. Its retention rate has expanded for seven consecutive quarters, and it currently sits at 116%, meaning the average customer spent 16% more over the past year.

Currently, DigitalOcean has a market cap of $8.9 billion -- but given the scope of the market, the tailwinds of digital transformation, and the company's differentiated business model, I wouldn't be surprised to see this stock grow at least five times its current value over the next decade.