Shares of BJ's Wholesale Club Holdings (NYSE:BJ) were trading down 6.4% as of 11:31 a.m. ET on Friday. The discount warehouse operator has delivered more than a double to investors over the past few years, and that's exactly why one Wall Street analyst believes it's time to sell.

J.P. Morgan analyst Christopher Horvers downgraded the stock from overweight to underweight and reduced the stock's near-term price target from $78 to $60, citing the potential for lower comp-sales growth in the near term. 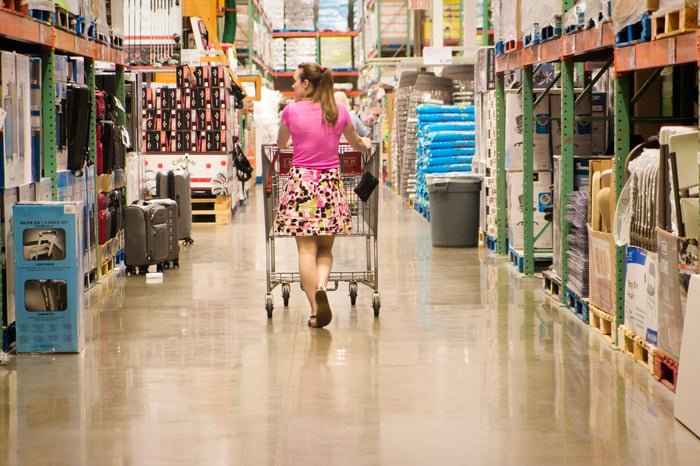 The analyst's bearish stance stems from the upcoming year-over-year comparisons with stimulus checks and tax credits that have helped retail sales over the last year. Horvers believes these factors, along with food cost inflation, could lead to disappointing growth in same-store sales performance in calendar 2022.

In its fiscal third quarter, which ended in October, BJ's saw net sales accelerate to 14% year-over-year growth, up from 5.6% in the previous quarter. CEO Bob Eddy said, "Our growth flywheel is spinning faster than it has in a long time, and we look forward to continue building on that momentum."

However, operating income fell 10.6% year over year in the most recent quarter, primarily due to significant increases in starting hourly wages for employees.

Management guided for positive comp sales in the low single digits for the fiscal fourth quarter, representing a deceleration from Q3's robust 13.1% comp-sales rate. This would validate Horvers' case, as guidance includes the impact from lower stimulus payments.

On the flip side, management also cited "strong momentum and membership results," partially offsetting lower stimulus. Like Costco Wholesale, BJ's generates around half of its operating profit from membership fees. CFO Laura Felice mentioned on the Q3 earnings call that fee income was "running ahead" of expectations last quarter due to "stronger-than-expected renewals and higher tier penetration."

All said, the sell-off could be a buying opportunity. BJ's trades at a massive discount to Costco on a price-to-earnings basis. In the grand scheme of things, BJ's P/E of 20 is not expensive for a growing retail business.