Please ensure Javascript is enabled for purposes of website accessibility
Log In Help Join The Motley Fool
Free Article Join Over 1 Million Premium Members And Get More In-Depth Stock Guidance and Research
By Nicholas Rossolillo - Jul 1, 2022 at 7:10AM

Salesforce's (CRM 3.41%) rise as one of the largest enterprise software companies in the world has been incredible. But its size, sticky product suite, and steady growth haven't spared it from the current bear market. Salesforce stock is down 40% from its all-time high reached late in 2021.

After its tumble, though, this company boasts a market cap of over $170 billion -- and co-founder and co-CEO Marc Benioff still has ambitious plans. Could Salesforce reach a market cap of $1 trillion by 2030, representing an average annualized return (excluding new-share issuance) of 25% over the next eight years?

Salesforce certainly has a chance at reaching the 13-figure valuation club. The sheer size and expansion of the market it operates in is one reason for optimism. It already dominates in the sales and service enterprise software department, but it has expanded (via multiple acquisitions) into new and even larger areas like marketing and commerce, data management, and communications software. Collectively, Salesforce thinks its addressable markets will grow 13% a year and reach over $280 billion in global annual spending by its 2026 fiscal year (which corresponds to calendar year 2025).

But reaching a $1 trillion valuation will require the company to continue its 20%-plus revenue growth rate for most of the 2020s. The company's free cash flow profit margin of just over 20% in the last trailing-12-month period will also need to hold steady -- if not improve. And the present valuation metric (about 30 times trailing-12-month free cash flow as of this writing) will likely need to hold as well.

Here's a rundown of possible scenarios that could get Salesforce in the ballpark of that $1 trillion valuation by the end of this decade, using the company's current revenue forecast of $31.8 billion for the current fiscal year as a starting point.

Poised for some serious returns

Could Salesforce be a trillion-dollar stock by 2030? It's a remote possibility. The scenario could change, though, especially if Salesforce continues its highly acquisitive ways (big purchases like Slack, Tableau, and Mulesoft would help) and issues new stock to pay for them. But one thing is for sure: Benioff's stated nearer-term goal of reaching $50 billion in annual revenue by fiscal year 2026 (calendar year 2025) is well within reach.

Whether it's able to reach $1 trillion or not, Salesforce has been a fantastic growth story. Even when factoring for a rising share count over the years (again, used for all those acquisitions), shareholders have been rewarded handsomely. 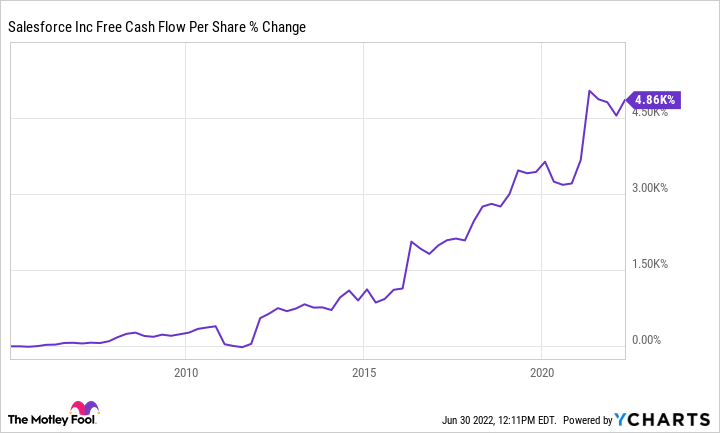 Rather than focus on market cap and revenue, this free cash flow per-share metric will be the primary factor that drives Salesforce stock forward. Benioff and the top team have a fantastic track record of increasing profitability from all of Salesforce's business software tools. With its cloud-based software and digital transformation only growing in prevalence in the business world, I believe Salesforce has a high chance of making investors money in the next decade.