Lucid may have kept its production guidance, but it raised another alarm for some investors.

Investors in early stage electric vehicle (EV) manufacturers don't really care about earnings and revenue meeting quarterly expectations at this point. The focus is more on production updates including any headwinds and rate of growth.

Lucid Group (LCID 1.33%) slashed expectations on that front earlier this year when it cut 2022 production guidance to a range of 6,000 to 7,000 of its luxury Air sedans. It still expects to meet that conservative guidance, but investors found something else in its third-quarter report that made them nervous. 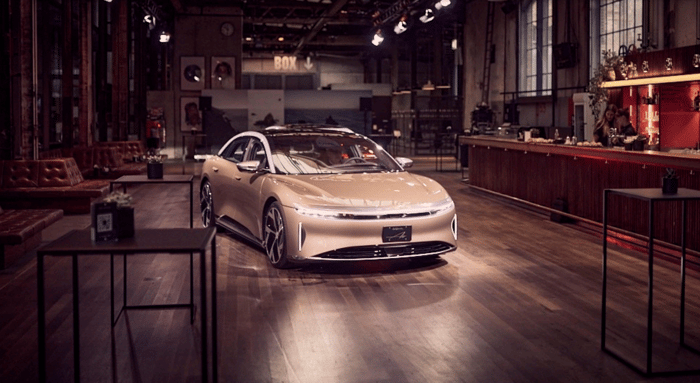 Lucid wasn't the only automaker to lower production guidance earlier this year. Supply chain constraints have created headwinds around the globe, and it was especially hard for a company like Lucid that was just beginning to ramp up its manufacturing plant. At the same time, however, it was important to focus on how demand was holding up.

Lucid was continuing to grow its backlog over the last year, and mapped out its global growth plans and related capital position along the way. It wasn't a surprise to see that the level of cash and cash equivalents on its balance sheet dropped by $750 million since the end of the second quarter as it continues to spend capital and increase its production. But it was a surprise to see its reservation backlog reverse direction. 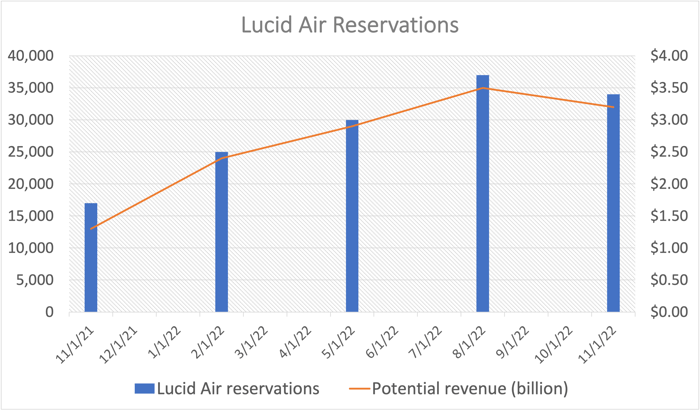 That one bit of information seemed to send investors fleeing the stock after the report. But investors with a long time horizon probably shouldn't panic. Even if Lucid doubles its production volume next year, it still has two years' worth of orders. And it's understandable if prospective customers don't want to wait two years for delivery. Especially as other automakers like Mercedes-Benz Group are bringing competing luxury EVs to market.

Has the story changed?

The big question for investors is whether the business is continuing to ramp up at an acceptable pace. While off a low base, production tripled sequentially in the third quarter versus the prior quarter. Lucid still expects to begin production of its high-performance Air Sapphire model in the first half of next year. The company says that the 1,200-horsepower vehicle will accelerate from zero to 60 mph in less than two seconds. Lucid also will begin taking reservations for its Gravity SUV in early 2023 with production scheduled to begin in 2024.

Lucid's reservation data also doesn't include the commitment from the government of Saudi Arabia to purchase up to 100,000 Lucid vehicles over the next 10 years. The company announced earlier this year that it plans to expand beyond its Arizona factory with a second facility to be located in Saudi Arabia. Lucid announced that construction is underway for that new facility. It plans to initially pre-manufacture Air vehicles in Arizona for reassembly in Saudi Arabia before eventually producing full vehicles there. That plant is expected to have an annual capacity of 155,000 vehicles.

That Middle East connection stems from a prior investment from the Saudi Arabian government's Public Investment Fund (PIF). Lucid continues to add investments from that source, too. Another item that may have alarmed investors after its quarterly update was the news that Lucid intends to raise an additional $1.5 billion, including more than $900 million from an affiliate of PIF.

The balance will come from selling additional shares of its common stock. But that shouldn't have come as a surprise to investors. Lucid filed a statement in late August allowing it to raise up to $8 billion from share offerings over the ensuing three years.

Prior to announcing its latest plan to raise capital, Lucid said its $3.85 billion in cash and equivalents was enough to fund its needs at least into the fourth quarter of 2023. The additional funds will help support further capital spending and working capital needs.

Investors believing in Lucid's long-term prospects shouldn't panic from the latest quarterly report. Plenty of risks remain for this speculative investment. But nothing new from the latest bit of news should prompt one to reverse course and sell.