Investors might be selling Tesla shares for the wrong reasons.

The rally in fast-growing technology stocks continued Friday after economic news released yesterday charged up stocks in sectors like electric vehicles (EVs). But EV leader Tesla (TSLA 4.73%) was underperforming start-ups like Lucid Group (LCID 1.33%) and Rivian Automotive (RIVN 1.60%). While Lucid and Rivian shares jumped nearly 9% and over 5%, respectively, Tesla stock didn't spike. As of 2 p.m. ET, Tesla shares were up just 2.5%, while Lucid and Rivian stocks were higher by 6.2% and 4.5%, respectively. 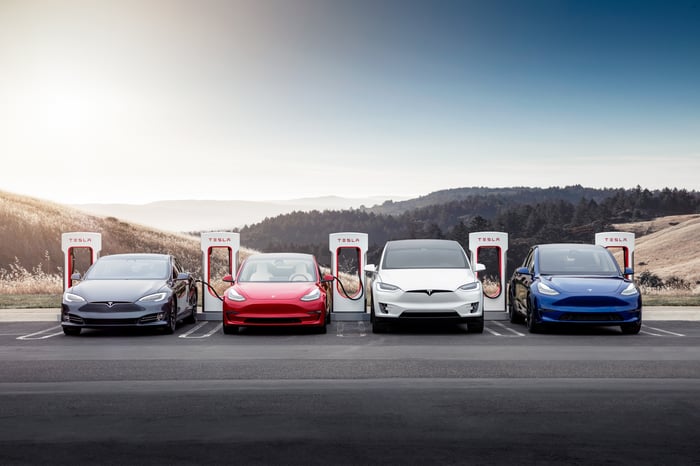 Lucid and Rivian both reported third-quarter earnings updates this week, and it was a mixed bag. Both continue to lose vast amounts of money, which was expected. The response to Rivian's report was more positive because its pre-order backlog continues to grow, and the company is quickly ramping up production volumes. Lucid reported a decline in reservations but said it still expects to hit its conservative production target for 2022. Both companies have a large amount of cash on hand. But Rivian expects its cash balance to carry it just through 2025 and Lucid only into the fourth quarter of next year.

So it's an interesting dynamic that Tesla, which has generated more than $6 billion in free cash flow in just the first nine months of 2022, has been underperforming these start-ups. It hasn't just been today. Over the past month, Tesla shares are down nearly 14%, while both Lucid and Rivian have had positive returns.

The difference seems to be the distraction of Tesla CEO Elon Musk taking over Twitter. That led to Musk selling nearly $4 billion of his Tesla holdings over a four-day span this week. Reports today say that he let Twitter employees know he sold Tesla shares to generate cash to "save Twitter."

Tesla investors seem to be wondering just how much time and money Twitter might cost Musk. After his most recent share sales, it's reasonable to wonder if there will be more coming if Twitter needs more cash injections. It also follows that a struggling business will take more of Musk's time and attention.

Economic news yesterday also energized investors in early-stage growth companies like Lucid and Rivian. With the Consumer Price Index (CPI) showing that inflation slowed last month, investors translate that into a slowdown in the Federal Reserve's interest-rate hike plans. That means future capital needs could be less expensive. As mentioned, both Lucid and Rivian will likely need to raise further capital.

The takeaway for investors is that there could be an opportunity building in Tesla. If its highly profitable business continues to grow at the 50% rate that it has been achieving, and Tesla's share price drops for reasons unrelated to the business, long-term investors should want to take advantage.