Amazon.com (NASDAQ:AMZN) rallied nearly 280% over the past five years, but some bullish analysts believe that it still has much more room to run. Wells Fargo analyst Ken Sena, for example, recently put a $1,400 price target on Amazon, marking its highest-ever price target and representing a nearly 50% upside from current prices.

In a note to investors, Sena notes that Amazon's "strong customer experience, scaled infrastructure investments, high user engagement, and lead within (the) cloud" made it the "best positioned" to apply AI data-sifting advances to "new verticals and industries." Sena notes that Amazon's lead in data creates a positive feedback loop, which is "feeding insights" back across its cloud, digital media, and marketplace businesses. 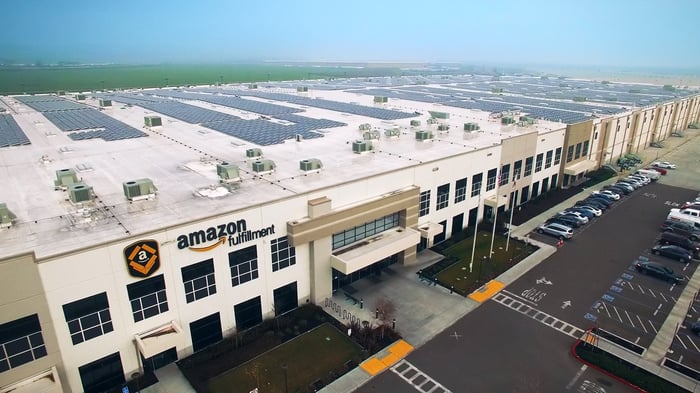 How realistic is that price target?

Analysts' price targets cover a 12-month period. Nearly 50 analysts currently cover Amazon, according to FactSet, with an average price target of $1,162. Amazon trades at about $961 as of this writing, which gives it a trailing P/E of 244 and forward P/E of 86. Both ratios are much higher than the industry average of 43 for specialty retailers.

Analysts expect Amazon's revenue to rise 28% this year, but earnings to decline 27% on increased investments in expanding its cloud and e-commerce ecosystems. Those investments are expected to boost its sales by 27% and its earnings by 127% in fiscal 2018.

The company's trailing P/E looks lofty due to its recent dip in profitability, but its forward P/E looks reasonable relative to its projected earnings growth for 2018. If Amazon meets earnings expectations and the stock hits $1,400 by the end of fiscal 2018, it would trade at 172 times earnings, which isn't much higher than Amazon's P/E ratios over the past year. 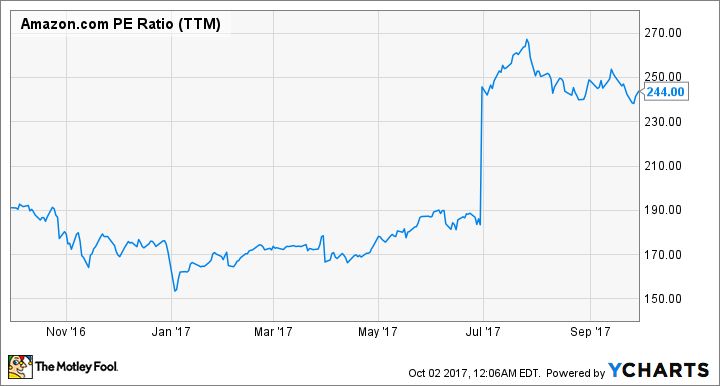 Amazon's price could reasonably hit $1,400 by the end of next year, but only if its strongest tailwind -- Amazon Web Services (AWS) -- keeps growing. AWS is currently the biggest cloud platform in the world and Amazon's biggest profit generator.

AWS's revenue rose 42% annually to $4.1 billion and accounted for 11% of Amazon's top line last quarter, giving the unit a run rate of $14.5 billion over the past four quarters. Research firm Wikibon expects AWS to generate $43 billion in annual revenues by fiscal 2022, which would account for 8.2% of all cloud spending worldwide. 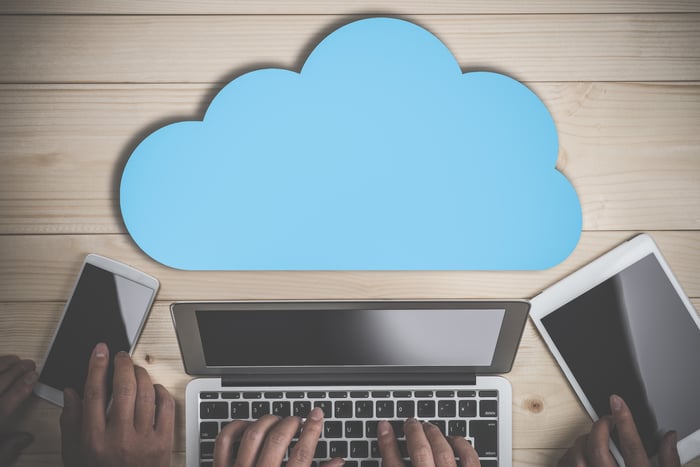 AWS serves data-hungry companies like Netflix and Comcast, as well as government agencies like NASA and the CDC. AWS launched more than 400 "significant" AWS features and services last quarter and migrated over 7,000 databases to the platform, which could hurt traditional database providers like Oracle (NYSE:ORCL) and Microsoft (NASDAQ:MSFT).

Meanwhile, the continuous expansion of Amazon's e-commerce ecosystem, with overseas expansions and additional investments in Prime, ensures that its customers remain locked in and that it remains the 800-pound gorilla in e-commerce.

Amazon's stock could steadily march toward $1,400 if its cloud and e-commerce businesses keep firing on all cylinders. But Amazon still faces fierce competition in both markets.

On the cloud front, it needs to widen its lead against Microsoft's Azure, the second-largest cloud platform in the world. Azure generates significantly less revenue than AWS, but it's growing at a much faster clip, with its sales nearly doubling annually last quarter.

Oracle also plans to stop AWS from poaching its database customers with a new AI-driven database platform, which can "automatically tune, patch, and upgrade itself while the system is running." Oracle founder Larry Ellison claims that AWS can't perform those tasks automatically, which results in more maintenance-related downtime.

On the e-commerce front, Amazon faces tougher competition from Wal-Mart (NYSE:WMT), which is aggressively matching Amazon's prices, beefing up its e-commerce capabilities, and targeting Amazon's weak spots with curbside delivery.

Investors should always take analyst price targets with a grain of salt. Amazon might soar to $1,400, but it could also stagnate as investors take profits or flock to more conservative stocks. As a longtime Amazon investor, I still like the long-term growth potential of the company's cloud and e-commerce businesses.

Therefore, lofty price targets are interesting, but I believe that it's better to simply hold Amazon for the long term instead of focusing on the analysts' latest price target changes, upgrades, or downgrades.