Please ensure Javascript is enabled for purposes of website accessibility
Log In Help Join The Motley Fool
Free Article Join Over 1 Million Premium Members And Get More In-Depth Stock Guidance and Research
By Sean Williams – Aug 20, 2015 at 5:19AM

Looking to add a little extra income to your retirement portfolio? Here are a handful of intriguing dividend stocks for you to consider.

Dividend stocks may not be the flashiest companies, nor do they tend to double your money at the flip of a switch like some high-growth stocks occasionally do. But over the long run, dividend stocks usually get the job done and leave retirees with a handsome nest egg and viable dividend income to live off of in their golden years.

Aside from the fact that dividend stocks have outperformed their non-dividend paying brethren over the long term, dividend companies serve a number of other advantages. For starters, dividends are a gleaming beacon for investors that imply a company's business model is so sound that it can afford to regularly share its profits with investors. Secondly, dividends can help cushion some of the impact of a downturn in the broader stock market. And most importantly, dividends can be reinvested back into shares of the same stock to compound your gains over long periods of time.

Of course, the reality is that not all dividend stocks are created equally. Chasing yield alone can be just as dangerous as throwing a dart at the newspaper and buying whichever stock it lands on. This is why it's important to analyze all aspects of a business when deciding which dividend stocks to buy.

With this in mind, today we'll take a closer look at a handful of dividend stocks that could be among August's best deals. Keep in mind that the selections are purely arbitrary on my part, and that, like any stock, its value could go up or down, so you'll want to conduct your own research to determine if these companies could be right for your style of investing.

Whole Foods Market (WFM)
Call it the "organic panic," or whatever you want, but once again, investors would just as soon lump Whole Foods in with standard grocers than realize that this is a company with a niche product and a vast head start on its competitors.

At the end of July, Whole Foods reported weaker-than-expected third-quarter results, which included $3.63 billion in sales, up 8% from Q3 2014 and 1.3% on a comparable-store constant currency basis, and adjusted EPS of $0.43. Comparatively, Wall Street has been expecting a $0.45 profit per share and $3.69 billion in sales. In other words, the dreaded double-miss.

But is Whole Foods really in trouble, or have investors just overreacted once again?

Within its report, Whole Foods announced its intention to open what it calls its "365" stores, which are smaller stores designed to go after a healthy, cost-conscious consumer that would feel more comfortable shopping in a smaller mom-and-pop style grocery store. Whole Foods also emphasized its push into home delivery, which is no guarantee for success for any grocer. However, with organic and natural customers expecting to pay a premium price for perceived-to-be healthier products, a delivery charge, or the added convenience of delivery, could be just what the doctor ordered.

The fact remains that demand for organic products is only expected to increase. Even if competition surrounding Whole Foods increases, it'll have the advantage of its loyal customer base and years of experience to fall back on.

Though Whole Foods' 1.6% dividend yield may not be much to look at now, growing profits and a potentially tighter cost structure will likely push its yield over 2% (in my opinion) within the next couple of years. The impetus behind UTC's most recent tumble, much like Whole Foods', was earnings related. Nearly a month ago, UTC reported revenue of $16.3 billion, a 5% decrease year over year, which was mostly a result of currency fluctuations, and adjusted EPS of $1.73, down 6% from the prior-year quarter. These results alone weren't the killer so much as UTC's new projections that its Aerospace and Otis segments would drastically underperform its early-year estimates.

However, investors in UTC get a monstrous degree of business diversity, ranging from industrial and consumer products to military/defense products supported by government contracts. Such diversity is somewhat dependent on the health of the global economy (which, may I remind, you has long periods of bull markets and relatively short periods of contraction), but that hasn't stopped UTC from generating $5.3 billion to $7.5 billion in operating cash flow in each of the last eight years.

China, which it blamed for some of the slowdown, is likely to remain a growing force in the global economy (and for UTC) for decades to come, while the recently announced sale of its Sikorsky helicopter unit to Lockheed Martin for $9 billion gives UTC ample cash to line its coffers and repurchase shares or boost its dividend.

Currently sporting a 2.6% yield, UTC could be an intriguing investment option for someone with a low-to-moderate risk profile and a five-year-plus time horizon.

To echo a theme, here, with August's best deals in dividend stocks, Procter & Gamble was also hammered on earnings weakness. For its fiscal fourth quarter, P&G delivered core EPS of $1 even, which was up 8% on a year-over-year basis, as net sales declined 9% year over year to $17.8 billion.

Looking ahead to fiscal 2016, Procter & Gamble cautioned investors to expect core EPS to be "slightly below to up mid-single digits" to the $3.77 in EPS it reported in full-year continuing operations. Comparatively, Wall Street expected more in Q4 top-line sales and was looking for $4.18 in EPS for 2016.

However, if you think it's time to worry, you may want to look twice at P&G's report. The majority of its troubles are derived from foreign currency issues. P&G has little control over what happens with currency fluctuations. Instead, it can only work to grow its consumer business and ensure that it rewards shareholders. 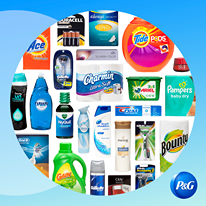 One component of boosting shareholder value is P&G's recent $12.5 billion deal to sell 43 brands in its beauty product business to Coty. The deal represents P&G's push to jettison slower-growing businesses in the coming years in favor of segments with faster growth potential. If anything, P&G will be able to boost its cash balance and enact share buybacks or dividend increases for investors.

The other factor at work, here, is that P&G's products are generally price inelastic. Regardless of how well or poorly the economy is doing, consumers need to buy items like toothpaste and detergent. This gives P&G little reason to discount its products, and it allows the company to heavily advertise in order to attempt to forge an emotional connection with the consumer.

Following 59 consecutive years of dividend increases (making it one of the most elite of Dividend Aristocrats), P&G's dividend yield of 3.5% certainly has to put it on the radar of investors seeking a low-risk, long-term income opportunity.