A bank's balance sheet is different from that of a typical company. You won't find inventory, accounts receivable, or accounts payable. Instead, under assets, you'll see mostly loans and investments, and on the liabilities side, you'll see deposits and borrowings.

Let's take a closer look at the balance sheet of the fictional First Bank of the Fool.

Cash
Surprisingly, cash represents only 2% of assets. That's because the bank wants to put its money to work earning interest. If the bank simply sticks its cash in a vault and forgets about it, it will have a hard time making a profit. Thus, a bank keeps most of its money tied up in loans and investments, which are called "earning assets" in bank-speak because they earn interest. 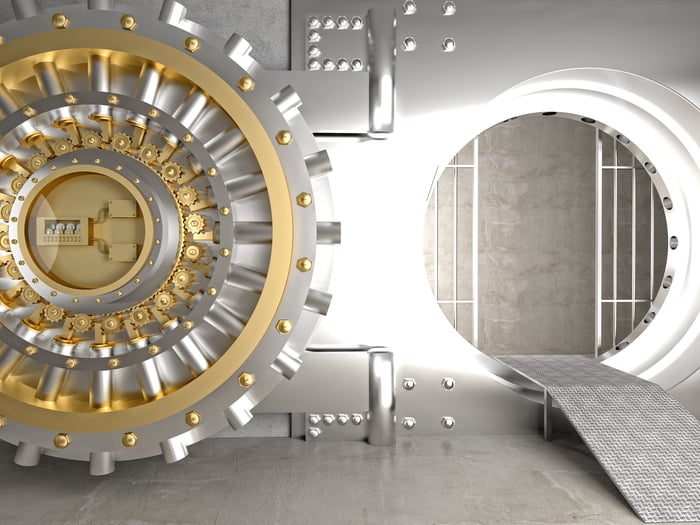 Securities
Banks don't like putting their assets into fixed-income securities, because the yield isn't that great. However, investment-grade securities are liquid, and they have higher yields than cash, so it's always prudent for a bank to keep securities on hand in case they need to free up some liquidity.

If we look at Wells Fargo (NYSE:WFC), SunTrust (NYSE:STI), and M&T Bank (NYSE:MTB), we see that approximately 16%, 18%, and 17% of their earning assets are invested in securities. The purpose of holding securities is for the bank to have safe, liquid assets available, so the banks primarily hold Treasuries and agency debt (such as Fannie Mae- or Freddie Mac-issued debt), which yield around the rate of the current long-term U.S. Government yield, anywhere from 4%-6%.

Loans
Loans represent the majority of a bank's assets. A bank can typically earn a higher interest rate on loans than on securities, roughly 6%-8%. You can find detailed information about the rates earned on loans and investments in the financial statements.

Loans, however, come with risk. If the bank makes bad loans to consumers or businesses, the bank will take a hit when those loans aren't repaid.

Because loans are a bank's bread and butter, it's critical to understand a bank's book of loans. In their 10-Ks, banks characterize their loans in easily readable charts. For example, M&T tells us that at the end of its last fiscal year, 36.5% of its average loans were backed by commercial real estate. We also know that of its $14.5 billion in commercial real estate loans outstanding, $4.5 billion was in metropolitan New York.

I was once interested in Corus Bankshares (NASDAQ:CORS). However, as of last quarter, 94% of its loans were for condo construction and conversions, and 33% of its loans were in Florida. Although I've heard good things about Corus' management, and the valuation looked compelling, I took a pass -- foreseeing the future of the Florida condo market is outside my circle of competence. However, bank stock investors have to read the financials if they want to know the kind of risks to which they are exposed.

Other assets
Other assets, including property and equipment, represent only a small fraction of assets. A bank can generate large revenues with very few hard assets. Compare this to some other companies, where plant, property, and equipment (PP&E) is a major asset.

Data provided by CapitalIQ, a division of Standard & Poor's.

Assessing assets
A bank's assets are its meal ticket, so it's critical for investors to understand how its assets are invested, how much risk they are taking, and how much liquidity the bank has in securities as a shield against unforeseen problems. In general, investors should pay attention to asset growth, the composition of assets between cash, securities, and loans, and the composition of the loan book. Also, investors should note a bank's asset/equity (equity multiplier) ratio, which measures how many times a dollar of equity is leveraged. As of the latest quarter, SunTrust, Wells Fargo, and Corus had equity multiplier ratios of 9.9, 10.7, and 12.25. Paying attention to these trends is critical to making money in bank stocks.

Now that we've looked at a bank's assets, we also need to understand the other side of the balance sheet -- its liabilities, which are how a bank finances its assets. Check back tomorrow for the whole story.

Only three days left in this season's Foolanthropy campaign! Visit www.foolanthropy.com to learn about five reader-nominated charities and make a donation.

Home Depot is an Inside Value recommendation, and Disney is a Stock Advisor recommendation. Try any of our Foolish newsletters free for 30 days.

Fool contributor Emil Lee is an analyst and a disciple of value investing. He doesn't own shares in any of the companies mentioned above. Emil appreciates comments, concerns, and complaints. The Motley Fool has a disclosure policy.