Shares of Newmont Mining hit a 52-week low on Monday. Let's take a look at how the company got there and whether cloudy skies are still in the forecast.

How it got here
Newmont Mining finds itself trading at a 52-week low because of a perfect storm of bad news. The gold miner was forced to take a huge asset writedown last quarter on its Hope Bay mine in Canada that resulted in a $1.61 billion quarterly loss.

The reason for the writedown was, quite simply, costs. A combination of rising labor and mine-building costs made operating the mine unreasonable, and the company chose to put the project on hold. This move is similar to what we saw recently from Kinross Gold when it placed a temporary hold on the build-out of its Tasiast mine in Mauritania. Agnico-Eagle Mines was also forced to take a large asset writedown on its Goldex mine, which is shut down indefinitely while repairs are made. Suffice it to say, writedowns are becoming a gold-sector norm as the cost of mining spikes.

How it stacks up
Let's take a look at how Newmont Mining stacks up next to its peers. 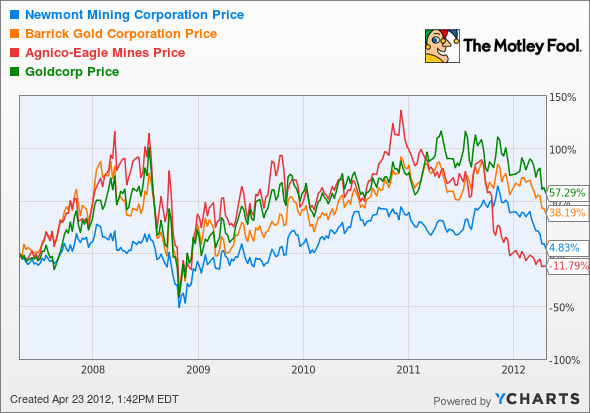 As you can see, gold miners tend to trade in tandem, but they've vastly underperformed gold (the metal) over the past five years.

Again, you could more or less throw a dart in the gold-mining sector and wind up with an incredible value right now. Aside from Agnico-Eagle and its shuttered Goldex mine -- which was expected to contribute 17% of its gold production -- the miners on this list are incredible values.

Just yesterday I discussed Barrick Gold, a company that has hit a 52-week low and should be able to counteract the rising inflationary costs of mining. Goldcorp actually boasts one of the lowest mining costs in the industry, thanks to the by-products it mines along with gold. In 2011 the company produced 2.5 million ounces of gold at a net cost of just $223 per ounce. Finally, Newmont, like Barrick, boasts a large enough balance sheet that it is able to adjust its operations as needed to maximize operating efficiencies. Investors are ignoring that gold prices aren't far from record levels, and these miners will be incredibly profitable on any gold price north of $1000.

What's next
Now for the real question: What's next for Newmont Mining? That question will depend on whether Newmont can get its cost inflation under control and properly take advantage of near-record gold prices.

Our very own CAPS community gives the company a three-star rating (out of five), with 92.8% of members expecting it to outperform. I am one of those nearly 93% that have made a CAPScall of outperform on Newmont and am currently down 41 points on that call. While that's discouraging, it doesn't change my opinion that Newmont is a buy.

One reason I remain excited about Newmont is the fact that it linked its dividend to the price of gold. This allows shareholders the potential for bigger dividends without actually having to own the yellow metal. Also, as fellow Fool Dan Caplinger noted this month, Newmont's production is contracted out, meaning the only constraint for the company is: How much can it produce? With a price of 6.5 times cash flow and a 3% yield, Newmont appears to be cheaper than ever.

Craving more input on Newmont Mining? Start by adding it to your free and personalized watchlist. It's a free service from The Motley Fool to keep you up to date on the stocks you care about most.