As a former professional golfer -- a term I use liberally, given the sizable tax write-offs my former career provided -- it seemed only natural that I enlighten Fools by applying insight gathered from my expensive tournament lessons, along with my observations from the world of golf, to your investment strategies. As the leading cause of weekend siestas in my home, I'll agree that golf can be very dull, but for the enlightened hacker who appreciates the more thought-provoking aspects of the game, it can also teach us a thing or two about investment decision making.

I start my golf and investing series by highlighting the main character in one of golf's most high-profile stories of all time. No, I'm not referring to the time Peter Jacobsen tackled a British Open streaker in 1985. I'm referring to -- you guessed it -- Eldrick Tiger Woods. As you undoubtedly know, his epic fall from grace beginning in late 2009 was widely documented by media outlets worldwide.

Along with millions in corporate endorsement dollars lost from the likes of AT&T , Accenture, General Motors' Buick, and P&G's Gillette, Tiger saw his golf game go down the tubes in a big way. While there are certainly some life lessons to be learned from his "transgressions" and their aftermath, I believe investors can glean some useful insight from Tiger by applying aspects of his approach to golf (and golf only) to their portfolio decision-making.

Learning from the masters
Today I want to focus on one of the distinct similarities that Tiger Woods and Berkshire Hathaway's Warren Buffett share in approaching their respective crafts. In particular, let's examine each man's willingness to endure short-term pain in the pursuit of long-term rewards.

Tiger Woods has displayed this long-term focus on multiple occasions, most notably by completely rebuilding his golf swing in an effort to become a more complete player. Back in 1997, after winning the Masters tournament by the largest margin in history, Tiger realized he still wasn't good enough. He had reached the pinnacle of golf and decided it wasn't his best!

After enduring a dismal year in 1998 painstakingly implementing changes to his golf swing, Tiger was well-rewarded when, over the next five years, he tallied 32 PGA Tour victories, including seven major championships. Recently, despite a 30-month drought driven by the scandal, injury, and swing changes, Tiger's long-term, endure-the-pain strategy has begun paying dividends once again. Just yesterday he won The Memorial, one of the more prestigious events on the PGA Tour, and his second victory this year.

Bottom line: Tiger has unmatched stick-to-itiveness in his approach to golf, ignoring all outside noise from the media and other critics. Many of his sponsors can't say the same, and with the exception of Nike , which decided to stay with him through the storm, they will be missing out on the publicity presented by his resurgence. Interestingly enough, if you look at the stock performance of the major sponsors who dropped Tiger versus Nike, the decision to endure the pain didn’t hurt Nike investors one bit. 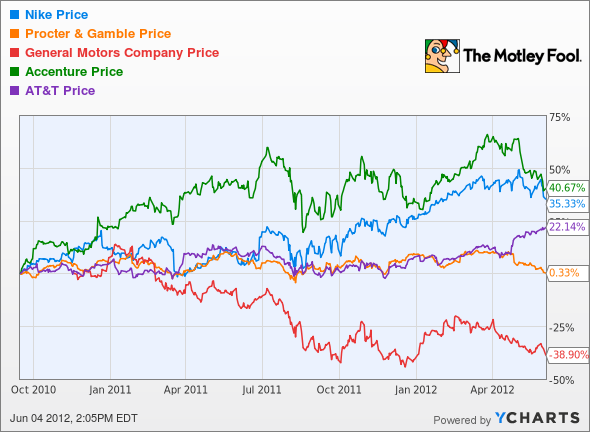 In the same vein, Buffett has openly expressed his preference enduring near-term obstacles in search of long-term gain, with the pain in this case coming in the form of declining stock prices and their long-term benefits for shareholders. Specifically, the Oracle's most recent annual report used IBM as an example of a Berkshire Hathaway holding he prefers to see bathe in a sea of red ink over the next few years. His logic? For solid companies set on deploying idle cash for share repurchases, investors are well-rewarded by near-term weakness in share prices.

It's simple arithmetic: For each dollar in share repurchases, the company is able to buy more of the company when prices are low. For a long-term shareholder, this bears fruit years down the road as future earnings power is supported by a much lower share count, relative to a higher-priced repurchase scenario. Once again, we have a master of his craft understanding the opportunity presented by what the average Joe would consider horrible circumstances.

With Europe in turmoil, banks destroying investor trust once again, and the stock market giving back all of its gains for the year last week, the urge to take a short-term focus can be hard to resist. However, the best investors (and athletes) understand the opportunity that difficult times present to those with a long-term focus. Removing emotion from your investment decisions is just one of the keys to successful investing, and in this special free report we highlight other savings habits the best investors use to build long-term wealth. In addition, we introduce three companies we believe make a perfect addition to a smart retirement portfolio. This limited-time report is titled "3 Stocks That Will Help You Retire Rich." You can grab a free copy today by clicking here.