Renting a car can be a both a pleasant and an unpleasant experience all wrapped up into one. On the one hand, who doesn't love driving someone else's car for a few days? On the other, is it just me, or do you generally feel that you get fleeced into buying additional products you don't need?

Despite these varied experiences, few people know much about the underlying companies themselves, much less how they operate. Do you know who the biggest rental car company is? How many cars they own? Where they buy their cars? How long they own them? What they do with them once they're done? Or whether any of the companies themselves are good investments?

My guess is no -- unless you've already read this article, that is. 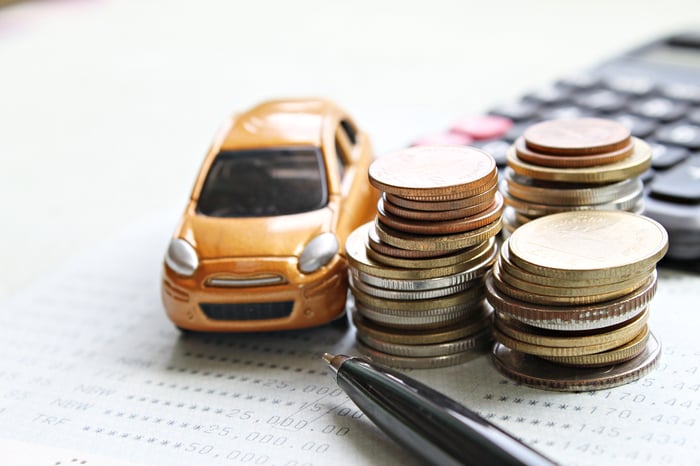 Enterprise is the largest rental car company in the world. It's number 15 on Forbes' list of America's Largest Private Corporations, and in terms of revenue, it would rank around No. 190 on the Fortune 500 if it were publicly traded. By comparison, its next largest competitor, Hertz, weighs in at No. 309.

Feeding the beasts
With fleet sizes in the six- to seven-figure range, it should be no surprise that rental car companies are the largest purchasers of cars and trucks in the United States.

Although precise figures for the industry are elusive, it isn't difficult to get a rough idea. According to the annual reports of Hertz, Avis, and Dollar Thrifty, rental car companies typically hold their vehicles for anywhere between 4 and 22 months, with an average holding period of 13 months. To put it another way, each year, they turn over roughly 92% of their respective vehicle inventories.

On average, then, these four companies potentially buy nearly 2 million cars and trucks each year. And as you can see below, a significant proportion are purchased from American car companies like Ford (NYSE: F), General Motors (NYSE: GM), and Chrysler -- making rental car companies some of their most important individual customers.

Source: Annual reports and author calculations. All statistics relate to 2011 vehicle purchases for the domestic market.

Disposing of the used cars
In addition to buying a lot of cars, companies like Hertz sell a lot as well.

As a general rule, rental car companies buy a large portion of their vehicles subject to repurchase or depreciation programs with the vehicle manufacturers. Under these programs, manufacturers agree to repurchase the vehicles at a specific time and/or price in the future, subject to certain conditions, or to guarantee the depreciation rate on the cars throughout the holding period.

In 2011, nearly half of cars sold by Avis and a quarter of Hertz's were so-called "program" cars subject to such agreements. Dollar Thrifty, the smallest of the three, nearly never uses this option, choosing instead to rely principally on the used car market to dispose of its used vehicles. And data for Enterprise, because it's a private company, isn't available.

Rental car companies also have the option of selling used vehicles to wholesalers, who then sell them to used car retail outlets, or directly to used car customers themselves. Last year, for example, Hertz sold approximately 65% of its non-program vehicles at auction, 19% directly to dealers, 9% through their own Rent2Buy program or at retail locations, and approximately 7% through other channels.

So, are rental car companies a good investment?
With one exception, the answer to this question over the last few years has been no.

While each of these companies may pride themselves on brand recognition and the like, for most travelers, rental cars are a commodity, interchangeable in most leisure travelers' eyes depending on price.

On a theoretical level, this interferes with the ability to develop a moat around their products and/or services. And on a practical level, it impedes margins and profitability. Avis and Hertz, for instance, have been profitable in only one and two of the last five years, respectively.

Indeed, all but Dollar Thrifty have been beaten resoundingly by the broader market since 2007, with Avis and Hertz down by nearly 50%. 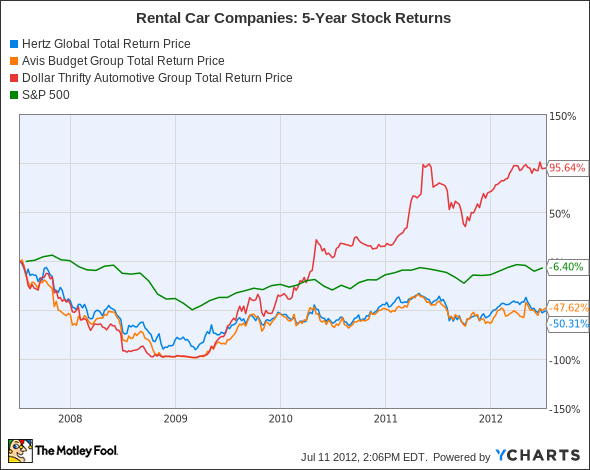 Foolish bottom line
Much like the airline industry, rental car companies probably aren't the best place to stash your extra investment cash. Still, this doesn't mean the auto sector as a whole should be avoided like the plague. GM and Ford were dealt a blow during the recession, but they have both bounced back operationally, and many believe short-term pressures created an incredible buying opportunity.