Will your favorite stock have its victory lap as we hit the home stretch, or will it get lapped? First-half performances can hold some clues, so let's look to the recent past to find out whether Cummins deserves a place in your portfolio going forward.

First-half recap
Cummins got off to a great start in 2012, roaring to a 40% gain by mid-March. It was all downhill from there. The engine maker's been on a long slide back to zero, which it passed on its way to a loss for the year earlier this month: 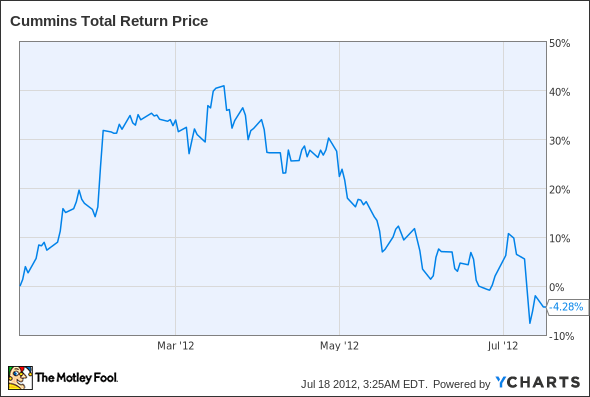 What the numbers don't tell you
Cummins got off to a strong start in 2012, with a strong fourth-quarter showing putting wind into the company's sails. The biggest moves of the winter, however, came a bit earlier. A string of major natural gas trucking announcements, which began just as Cummins boosted its guidance, helped a slew of related companies strike out for greater gains. Most of them, anyway: 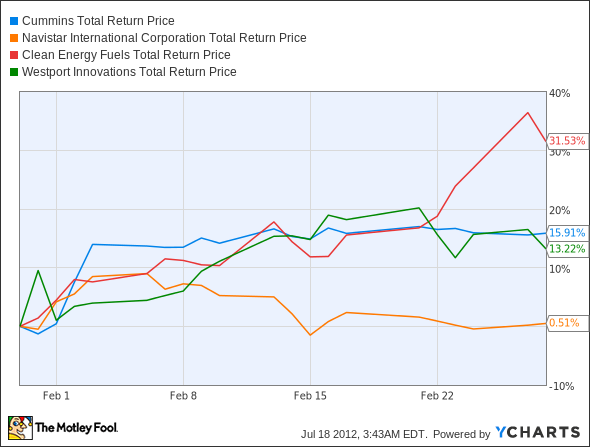 Navistar and Clean Energy Fuels got the party started with a partnership to increase the availability of nat-gas trucks while also building out the refueling infrastructure needed to make them useful. That infrastructure announcement (more a promotional tool, since Clean Energy would have been building fueling stations regardless) played right into Cummins and Westport Innovations' hands two days later. After some hand-wringing by Westport shareholders, Navistar eased competitive concerns by confirming that its nat-gas trucks would be running with Cummins Westport engines.

But just as the rising tide of nat-gas growth seemed destined to lift everyone's boats, Congress punched a hole in their hulls by turning aside a tax incentive amendment for nat-gas truck purchases. It's been mostly downhill for Cummins (as well as the other three major players) ever since.

Not even truck builder PACCAR's commitment to nat-gas engines -- on display at the Mid-America Trucking Show less than two weeks after the amendment's failure -- could stop the bleeding. Nor did Cummins' announcement that it would develop its own nat-gas engines reignite the market's interest in its stock.

Cummins' first-quarter results, despite great bottom-line growth, only continued the bleeding thanks to underwhelming forward estimates from top brass. The latest guidance cuts, released just last week, seem to confirm what the market's been anticipating for months -- Cummins has some serious macroeconomic headwinds to contend with.

The biggest questions ahead won't be about nat-gas engines. Instead, investors will have to ask themselves just how bad they feel the global economy could get. If a recession hits like a ton of BRICs (pardon the pun), Cummins will be in the same situation as many of its heavy-equipment peers. Few companies will want to buy new trucks when they're worrying about whether or not they can even pay their bills.

Cyclical industrial companies won't be the best choices for your portfolio in the event of a major downturn. You need stable dividend-paying stocks, supported by products the whole world will buy in any economy. That's why The Motley Fool's got a brand-new free report: "The 3 Stocks Dividend Investors Need." Don't wait to start building an unshakeable financial foundation. Click here for your free information now.