France Telecom (ORAN -3.25%) can be a frustrating stock to own. The French telephony giant, which conducts wireless business on three continents under the Orange brand, pays double-digit dividend yields, but share prices often collapse on short notice: 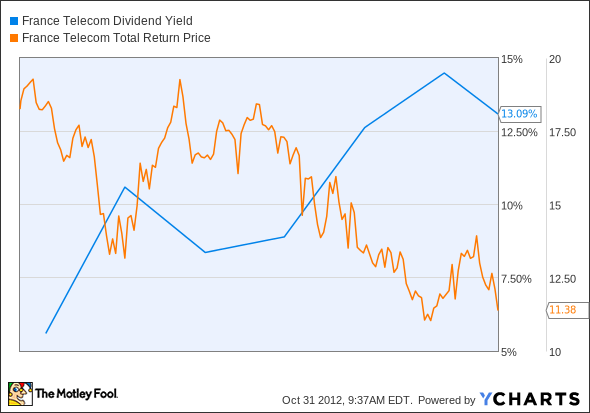 The markets are punishing France Telecom's stock again. Share prices have fallen 9% over the last week, most of it right after the company's third-quarter report. This time, the market damage was caused by a kidney punch right in France Telecom's generous dividends.

The quarter's numbers looked fine: EBITDA profits of $4.7 billion on $13.8 billion in sales were right in line with analyst estimates. Management expects to deliver full-year cash flows in line with existing targets, which implies about $1.4 billion of operating cash flows (France Telecom's term, though the measure is closer to what Fools might call free cash flow) in the fourth quarter.

So far, so good. Low-cost competition from local company Iliad in the French market hasn't killed this company's cash machine yet. In fact, a roaming agreement with Iliad claws back some of the lost revenue damage from the upstart competitor.

Here, there be dragons
But there's trouble floating just under the surface. Management wants to reduce France Telecom's debt load by about 10%, and those generous dividend payments are slowing down the debt reduction effort: So the company will "adapt" its dividend policy to the new realities. That's a euphemism for slashing it by as much as 40%.

This wouldn't be a shock if France Telecom's payouts weren't so darn dependable in recent years. The dividend policy may look jumpy when viewed from this side of the Atlantic: 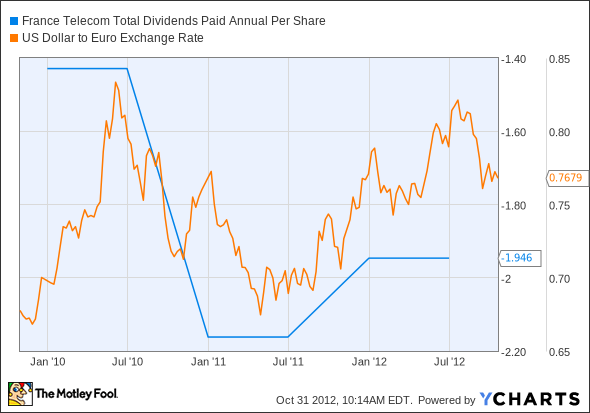 ... but take currency conversion out of the equation, and you'll see that France Telecom really doesn't tinker much with its payouts: 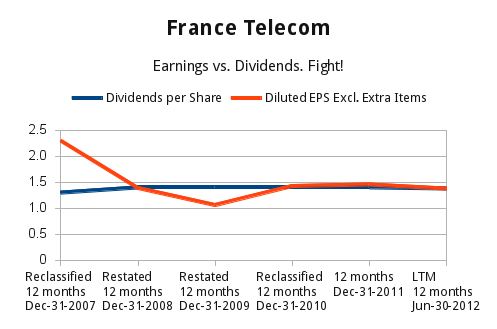 Data from S&P Capital IQ, measured in Euros per share.

Time to take action?
So is it time to cut your losses and run far, far away from this wounded dividend champion?

Speaking as a France Telecom owner myself, I don't think so. Actually, I believe we're looking at a perfect time to get into the stock right now.

The debt reduction plan is fundamentally sensible because it will conserve cash in the long run. The company spent $2.1 billion on interest payments over the last 12 months. Reducing that expense will do wonders for the bottom line -- and for the ability to offer larger dividend yields in the future.

Moreover, the move allows France Telecom to continue building high-speed wireless services across its multicontinental networks. It would have been a fatal mistake in the long run to slow that effort down in order to protect the dividend. Orange simply can't afford to be left behind in this global arms race.

And you know, France Telecom's payout is still huge despite a drastic cut. The company promised to pay out at least $1.04 per share in the next two fiscal years. That works out to a 9.2% yield at today's share prices. To put that into perspective, Verizon's (VZ -0.84%) yield is just 4.6%, and AT&T (T -1.08%) pays out 5.1%. The American telecom giants are established dividend favorites in their own right, but France Telecom blows them away even with the new, lower payouts.

In fact, France Telecom's yield remains one of the richest on our Income Investor scorecard, behind only the 9.9% yield of cemetery operator StoneMor Partners (STON).

All in all, I'm very comfortable owning France Telecom right now. The company may face heavy competition in France, but it's exploring international growth and making some tough but very intelligent decisions to build future cash flows. My shares will keep collecting handsome payouts until further notice. Furthermore, I'm starting a bullish CAPScall on the stock right now in order to capture the long-term opportunity at discount pricing, thanks to that dividend cut.

There's Only One Telco I Own Now