When big bank CEOs are usually talked about, they are generally divided into one of two camps. The first camp features the superstars, people like JPMorgan Chase (NYSE:JPM) CEO Jamie Dimon, a man who gets praise even in light of something as disastrous as the "London whale" fiasco. Quiet professional John G. Stumpf leads Wells Fargo (NYSE:WFC) far from the glaring eyes of Wall Street in San Francisco, and has done so since 2007.

The other camp, however, is where pundits and investors alike tend to focus. Up until his recent resignation, Citigroup (NYSE:C) CEO Vikram Pandit was seen as the worst of the four big bank CEOs, but his departure has vaulted Bank of America's (NYSE:BAC) Brian Moynihan into that (un)lucky chair. But is all the negative attention toward Moynihan warranted? Let's dig a little deeper.

Who is Brian Moynihan?

Brian Moynihan took an unusual path to the top spot, at least as compared to some other big bank CEOs. A lawyer by trade, with a law degree from the University of Notre Dame, he started out as deputy general counsel at Fleet Financial in 1993, until Fleet merged with Bank of America in 2004. He served in various positions within Bank of America until he was elevated to general counsel in December of 2008. When Bank of America bought Merrill Lynch from the cusp of bankruptcy in the fall of 2008, he was named CEO of the investment firm. He served in this position until taking over for Ken Lewis on January 1, 2010.

Why is he so reviled?
"Reviled" may be a bit too strong a word to describe how a lot of folks feel about Mr. Moynihan. With Pandit out of the way, Moynihan is often viewed as the next big bank CEO to get sent packing. This may be partly because of the performance of Bank of America stock during his tenure, which has shown less than stellar performance in his near three years at the helm: 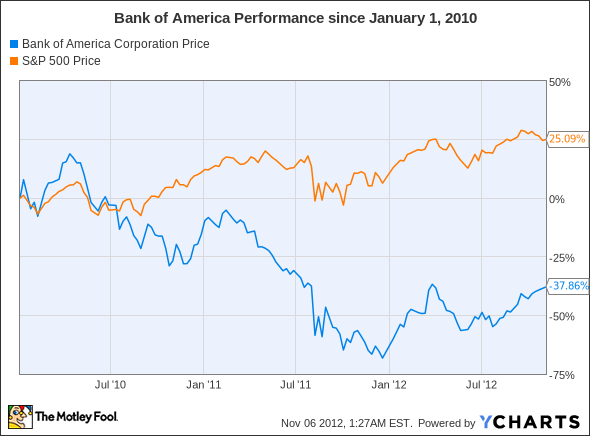 You would think with a lawyer at the helm, Bank of America would be able to at least navigate the troubled legal waters it has found itself in over the past few years. I think the worst is mostly behind the bank, though you never know when some other issue will rear its ugly head, and the bank will face another $1 billion lawsuit from the likes of the Department of Justice.

It's not entirely his fault
I don't want to place all the blame on Moynihan for the bank's poor performance under his tenure; he really has spent nearly three years climbing out from under the disaster that was the Countrywide Financial acquisition, which has cost the bank over $100 billion in subprime-mortgage charge-offs over the past few years, which doesn't include over $132 billion in bad loans sold to the government between 2004 and 2008. Ken Lewis was at the helm when the bank bought Countrywide, and Moynihan is simply dealing with the fallout. Whether or not he can right the ship before investors truly get impatient will be something to watch over the next year or so.