This just in: Apple (NASDAQ:AAPL) shares are weak and dropping over $10, or 2%, from yesterday's close. Oh wait, that's not news. That's just business as usual for the Mac maker these days. Just a typical Thursday sell-off, that's all. I guess it's better than the 3.6% that the stock lost last Thursday.

In doing so, the company has now given up an important threshold for investors: Apple's market cap is now valued less than $500 billion. After crossing that milestone in February, the company is crossing it again, except heading the other direction. 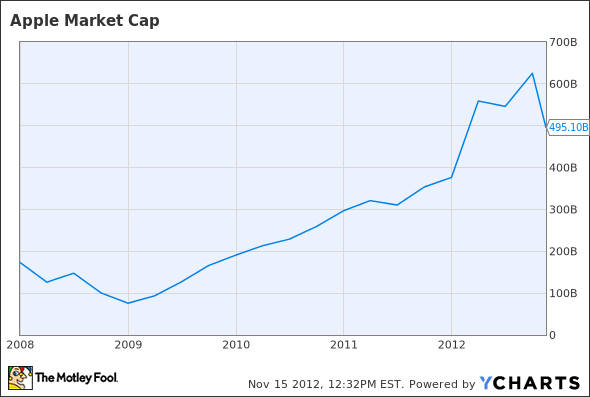 Apple's market cap topped out around $660 billion in September. That means at today's low, Apple has seen nearly $170 billion in valuation evaporate in less than two months. That's double Disney's (NYSE: DIS) entire value, so it's like Apple just lost two Disneys in a matter of eight weeks.

Every day that Apple gets cheaper is presenting investors another opportunity to get in on a new daily deal. In fact, subscribers to The Motley Fool's new Foolish Offers service, our competitive response to challenge Groupon's (NASDAQ: GRPN) terrible business model, have even received this coupon in their email inbox: 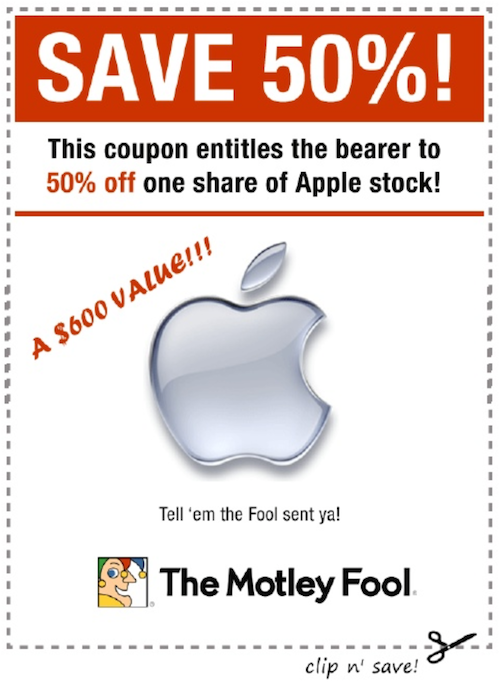 Topeka Capital analyst Brian White recently reiterated his $1,100 price target, over double current prices. If Apple can rebound and eventually hit that new high, today's prices really are like getting a 50% off deal on the largest tech company in the world -- without Foolish coupons!

Getting caught up
As far as actual investing commentary today goes, Morgan Stanley analyst Katy Huberty was out with some bullish comments that the bulls are clearly ignoring. Huberty is reiterating a buy rating and $714 base case price target. I say "base case" because there's also a bull case target of $980 and a bear case target of $495.

Based on meetings with a slew of Apple suppliers in the Asia-Pacific region, she believes that the iPhone and iPad are getting past early production hurdles and constraints, with suppliers putting up "stronger-than-expected" December revenue and implying that production volumes are on pace to top Street expectations of 46 million iPhones and 23 million iPads. In particular, production bottlenecks related to the in-cell touch panels are easing, with display yields up 70% to 80% in the fourth quarter.

That corroborates prior sentiments from BTIG Research analyst Walter Piecyk and Piper Jaffray analyst Gene Munster that the iPhone 5 is starting to catch up with demand.

China: The land of opportunity
There's also a good chance that Apple's long-awaited partnership with China Mobile (NYSE:CHL) may happen next year. Huberty even goes as far as to call it the top factor that could boost the Mac maker's shares. The Chinese government is expected to issue LTE licenses in the second half of 2013, which would pave the way for the iPhone 5 on China Mobile's network since the device's hardware already technically supports the carrier's unique TD-LTE and TD-SCDMA standards.

The iPhone 5 has already cleared two out of the three necessary regulatory hurdles for the device to launch in China. That includes one model for China Unicom's (NYSE:CHU) network and another for China Telecom's (NYSE:CHA) network.

China Mobile has always been a monster deal waiting to be inked, because the carrier's subscriber base quite literally dwarfs China Unicom and China Telecom. 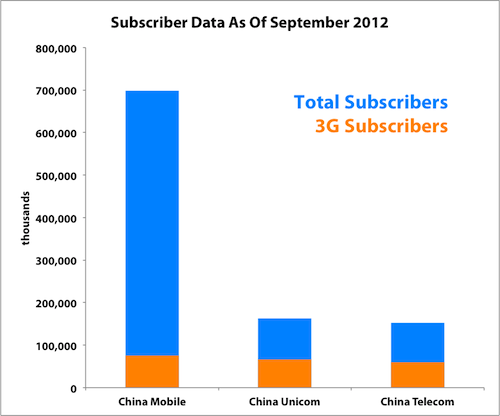 That's 700 million subscribers currently on China Mobile's network, more than twice the population of the United States. Huberty figures that Apple will announce a partnership with China Mobile in the second half shortly after the iPhone 5 obtains all necessary regulatory clearances.

The deal is on!
The Apple bears are still calling the shots, despite all the reasons to be bullish on Apple's long-term business, or what investors should actually care about. The market is presenting investors with a new deal every day -- will you click the "buy now" button?