Seasonally adjusted initial jobless claims fell 9% to 410,000 for the week ending Nov. 17, the Department of Labor announced today, a welcome sign after the previous week's 25% jump in claims.

Signs of a labor market recovery had preceded the previous week's spike, and this most recent report provides a glimmer of hope that last week's steep rise may have been an anomaly, rather than a trend.

On a state level, Superstorm Sandy was credited with increasing jobless claims in New York, New Jersey, Pennsylvania, and Connecticut. New York and New Jersey initial claims increased by 44,000 and 31,000, respectively, in sectors ranging from construction to administrative services. Connecticut notched a 1,800-claim increase in the week while Pennsylvania saw 7,000 more claims than in the previous week. Meanwhile, Ohioans filed 5,000 fewer claims, due mainly to fewer manufacturing layoffs. 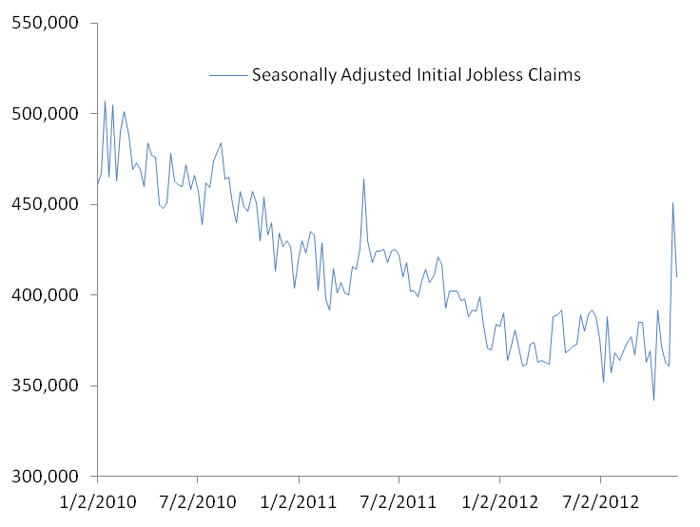 Although this week's numbers represent a decline from the previous week, its 400,000+ initial claims fail the economist's cut-off level for an improving labor market. The four-week moving average pushed higher, increasing 2.5% to 396,250.

Why These 2 Stocks Got Crushed in a Booming Market

These 2 Stocks Deserve a Look Even as Markets Soar