Please ensure Javascript is enabled for purposes of website accessibility
Log In Help Join The Motley Fool
Free Article Join Over 1 Million Premium Members And Get More In-Depth Stock Guidance and Research
By Evan Niu, CFA - Nov 22, 2012 at 7:00AM

Diving into NVIDIA and smartphones.

NVIDIA (NVDA 1.10%) has struggled in recent months largely thanks to a continuous drumbeat of bad news in the PC space. Yet, the company has worked hard to diversify its business away from PCs and toward mobile devices and high-end workstations.

The opportunity
While the company remains a leader in the GPU market, there's less growth in the broader PC market than in NVIDIA's formative years during the rise of the PC. NVIDIA has three primary operating segments: graphics processing units (GPU), professional solutions business (PSB), and consumer products business (CPB). The GPU segment remains the bulk of sales, but the other two have significant potential upside in the years ahead. 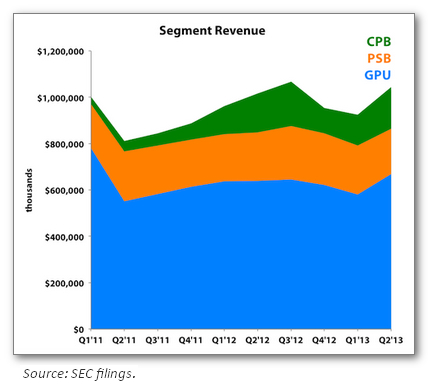 Perhaps the most exciting growth prospects that NVIDIA has are in mobile chips, where the company aspires to challenge dominant incumbents like Qualcomm (QCOM 0.09%). This business is included in the CPB segment.

NVIDIA launched its Tegra family of ARM-based mobile processors in 2008. Since then, these chips have become a force to be reckoned in the mobile chip market. NVIDIA was the first company to unveil a quad-core mobile applications processor, the Tegra 3, which incorporates four ARM Cortex A9 cores alongside a fifth "ninja" core for low-power tasks. Tegra 4, code-named "Wayne," will utilize ARM Cortex A15 cores for dramatic performance improvements.

When NVIDIA proceeded to acquire small baseband specialist Icera for $367 million in cash last year, it was an unambiguous indication that NVIDIA was hoping to exactly replicate Qualcomm's value proposition. Qualcomm has done remarkably well for itself by selling mobile applications processors bundled with discrete baseband modems as well as processors with integrated basebands.

In February, smartphone maker ZTE announced the Mimosa X, which was the first device to utilize a Tegra processor alongside an Icera baseband. This isn't quite a blockbuster device in terms of unit volumes, but it was a milestone in itself for NVIDIA's mobile strategy. A few months later, NVIDIA announced that a new Icera LTE modem was validated for AT&T's LTE network, paving the way for future design wins destined for Ma Bell's network.

The next important move for NVIDIA will be to integrate cellular connectivity directly into its Tegra chips. The company announced these chips, code-named "Grey," a year ago, and was hoping to have them hit the market in 2012. Unfortunately, the time frame of these processors has now been delayed and they won't be launched until 2013. Qualcomm currently remains the only player with an integrated LTE solution, an advantage that the company is capitalizing on.

NVIDIA has had tremendous success in tablets, scoring numerous high-profile design wins within the non-Apple segment of the market. Google selected the Tegra 3 for its Nexus 7 tablet, and Microsoft's Surface RT tablet similarly uses one.

Windows RT, which supports ARM-based chips, is a major opportunity for NVIDIA for even more tablet growth with other OEMs. Microsoft is imposing restrictions on ARM chip makers and only "allowing" each to select two hardware partners for Windows RT. NVIDIA has selected Lenovo and Asus, two respectable OEMs. Incidentally, Asus also builds the Nexus 7.

For now, NVIDIA is gaining more traction in tablets than smartphones, a trend the company sees continuing in the near future. Despite several flagship smartphone wins, like the HTC One X, it still doesn't rank in the top five smartphone processor companies when ranked by revenue. The launch of the Tegra "Grey" chips could help change that.