Google (NASDAQ:GOOGL) has found itself in an unfamiliar situation. Big G has a hit product on its hands, and no idea how to handle the unexpected success.

It's Black Friday today, the perfect time to make a statement with fantastic sales. Google has a brand new top-of-the-line smartphone to peddle in the Nexus 4, which is made by LG but sold by Google. And... well, there won't be a Black Friday bump in Nexus 4 sales.

The darn thing sold out on Thanksgiving instead.

Let's back up a bit. The new flagship of the Android fleet has been available, and chronically sold out, since Nov. 13. Google ain't used to that kind of retail success, given that it sells its smartphones direct to the consumer without carrier subsidies. So you tend to get sticker shock just looking at the prices, then go look for a cheaper, subsidized model.

Which means that Google isn't prepared to deal with sell-out success. Google's e-shopping outlet for the Nexus 4 doesn't let you order now and wait for delivery later, or even tell you how long the backorder situation is expected to last. Instead, you get a curt "We are out of inventory. Please check back soon."

T-Mobile, Google's only carrier partner for this model, just opened up its doors for Nexus 4 sales on Thanksgiving -- and sold out in a matter of hours.

Yeah, so the phone is still sold out everywhere. And again, T-Mobile just says that it's "out of stock," with no option to ship it later or estimates of availability windows.

A "good news/bad news" situation
Good news: Google hit a nerve and has a serious hit product on its hands.

Bad news: Consumers can't buy it as the holiday shopping season roars into town. Can you spell "missed opportunity," Google?

This is the kind of huge interest you'd expect for an Apple (NASDAQ:AAPL) device. It's the kind of blockbuster movie kids line up for hours or days in advance, but they're getting turned away at the door. "Sorry -- no more tickets!"

You'd think a rain check would be more appropriate than a flat "try again later."

I mean, that's how Apple handles its shortages. The iPhone 5 is still sold out, but you can at least order now and expect shipment in a couple of weeks.

Google scored this sales bonanza with a pricing coup. The 8-gigabyte Nexus 4 sells for $299 with no strings attached -- no two-year contract, no carrier discounts, nothing. You're free to buy the phone and plan separately, with the freedom to shop around for the best deal you can get on voice and data plans. Or just take the SIM card from your old feature phone to get voice service, and rely on Wi-Fi networks for data access.

T-Mobile tethers the larger 16-gigabyte model to a 2-year commitment, giving you a $150 up-front discount in return. (T-Mobile claims that it's a $300 rebate, but buying a no-plan model straight from Google only costs $150 more. Don't trust marketing claims, dear consumer.) So you have a choice between cost-efficient phones without long commitments, or the traditional discounted model. And it's sold out both ways.

To put Google's direct deal into context, Verizon (NYSE:VZ) discounts its top-shelf HTC Droid DNA to $199 with a two-year deal -- or you can buy it without a plan for $599. Looking for a plan-free Android at about $300? You'd have to settle for something like the Pantech Marauder or Samsung Galaxy Stellar -- older or downright low-end models with anemic hardware and aging software.

AT&T (NYSE:T) will give you an iPhone 4 (no Siri!) for a cool dollar, which AT&T says is a $50 discount. Its cheapest off-contract Android options are a handful of Pantech devices for $350 each. Yeah, they're the kind of smartphone you'd expect to get free with a contract or perhaps inside your next cereal box. Like this pager-iffic starter beauty, for example: 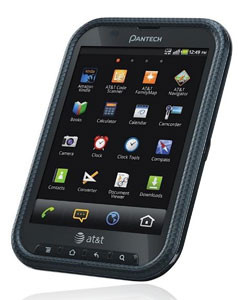 The Pantech Pocket, as seen at AT&T Wireless where it sells for $350 or $0.99, depending on contract choices. Deal, or no deal?

Show 'em how it's done, son
But the Nexus line was always expected to change the way Americans buy smartphones, and the fourth generation finally figured out how.

Google gives you the latest and greatest for the same price as last year's tired leftovers. The Nexus 4 comes with a large HD screen and the faster mobile processor Qualcomm (NASDAQ:QCOM) makes. The screen is covered with Corning (NYSE:GLW) Gorilla Glass 2, you can charge the darn thing wirelessly, and the only thing missing is a 4G LTE network chip. Then again, the Nexus 4 does connect to 42-megabit HSPA+ networks, like the service T-Mobile touts as a 4G option.

This phone could have been a major threat to Apple's holiday iPhone sales, and would easily replace the Samsung Galaxy S3 as the top-selling Android device (or smartphone of any type). But Google blew it with a combination of too-low sales expectations and clumsy backorder handling. I'm sure LG factories are running around the clock to fill out the gaping hole in Google's Nexus 4 inventory, but it's probably too little, too late to make a difference to this holiday season.

Let's hope that Google learned something from this strangely painful experience, and comes back swinging next year.