Spoiler alert: Natural gas is a hot topic. Companies around the world are trying to gobble up land in newly discovered shale plays, and some claim natural gas could be a key to North American energy independence. So as an investor, it is probably a no-brainer that this industry has huge potential upside. If you are determining when to get into the market, here are three reasons why now would be a very good time.

1.) Energy equivalent prices are out of sync
If you don't count regional discrepancies, there has been no historical price premium for one type fuel or the other. Current market prices, though, tell a different story. 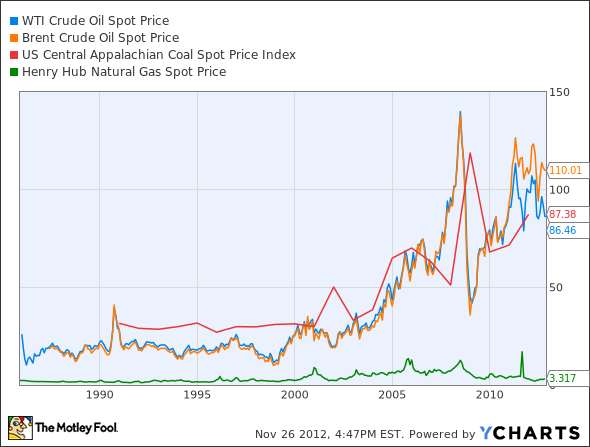 Generally speaking, oil and gas prices held to this multiple of six measure until about 2006, when oil prices spiked as natural gas fell off. Thanks to this odd movement, the average spot price for a barrel of oil is trading at around 30 times the Henry Hub spot price for natural gas.

Clearly, there is a problem with natural gas pricing right now. Now, you could argue that we are in a new drilling environment that favors natural gas, and that a reversion to this historical trend will not happen. Perhaps we'll never get back to the multiple of six, but even if we were conservatively to estimate a reversion halfway back to the mean, with a natural gas price parity of 12, then gas prices would more than double from what they are today.

If this happens, companies like SandRidge Energy (NYSE: SD) could be kicking themselves for spending so much of 2012 shifting their production focus away from gas to liquids. It could also make for some tough times for natural gas ETFs.

2.) Demand will catch up with supply
If gas prices bucked the multiple of six measure since 2006, then why would they return to that multiple now? Since that time, America has unlocked loads of natural gas, but it hasn't found the demand to keep up with production. Today, with natural gas prices staying even below the multiple of 22 times a metric ton of coal, several power utilities are converting their plants to run on natural gas. Also, some smart companies are finally catching on to the opportunities for natural gas consumption. Clean Energy Fuels (NYSE: CLNE) has been pouring money into building out natural gas fueling stations across the country, and Westport Innovations (NYSE: WPRT) has been busy developing natural gas engines for almost all major American automotive manufacturers.

With its growing use in electricity generation, an outlet into the transportation sector, and a rapidly increasing gas infrastructure, the demand for natural gas in the United States will probably increase very quickly in the upcoming years. This will help to bring balance to an American natural gas market that has suffered from oversupply for well over a year.

3.) Oil and gas companies remain unhedged for 2014
An essential part of an oil and gas company's strategy is to write futures contracts that protect it from the possibility that natural gas prices will drop. But big upstream companies Chesapeake Energy (NYSE: CHK) and Ultra Petroleum (NYSE: UPL) remain unhedged for 2014. Today, a futures contract for natural gas delivery one year from now is priced at about $4.12 per million cubic feet; the current unhedged price for the same volume of gas now runs about $3.62. So on paper, it looks like these companies are taking a big risk. Why?

To get a clearer picture, Ultra Petroleum's CEO Mike Watford noted on its previous earnings call that the upside for not locking in a natural gas price for 2013-2014 is much greater than the risk. He and other managers believe the market will react quickly to recent slowdowns in production and exploration from upstream companies. So the upswing in natural gas prices will result in a price that is higher than what the company can write a futures contract for at this time.

To get a better idea of where these insiders think the market is going, let's listen to T. Boone Pickens. At the most recent Great Investors' Best Ideas Investment Symposium, Pickens made the bold claim that we will see natural gas in the $5 range next year, and up to $6 by 2015. So, despite his big stake in Clean Energy Fuels -- which benefits more from cheaper natural gas prices -- Pickens still thinks gas is going up in a big way.

Also, perhaps it's just coincidence, but $6 would just about be a reversion halfway to that BTU equivalent I mentioned earlier.

The price of natural gas wasn't the only thing Pickens talked about at the symposium. He also took some time to pick a couple of stocks that he believes to be the big winners in the oil and gas space in the next couple of years. We've put together an in-depth analysis on one of these companies, detailing why it could become one of the biggest winners in the energy space. To order a copy of this premium report, click here.