The recent presidential election added insult to injury for coal stocks. Investors are throwing in the towel as natural gas and alternative energies topple coal's castle. But a recent report reveals one big reason why coal might still be king. Here's what you need to know.

Coal's roller-coaster ride
If there's one consistent characteristic of coal stocks, it's their inconsistency. With global recessions, China stimulus packages, natural gas prices, and environmental policies more awkward than a middle school dance, coal stocks have been bounced around considerably over the past few years.

But through the double-digit jumps and dives, coal stocks have headed down more than up. 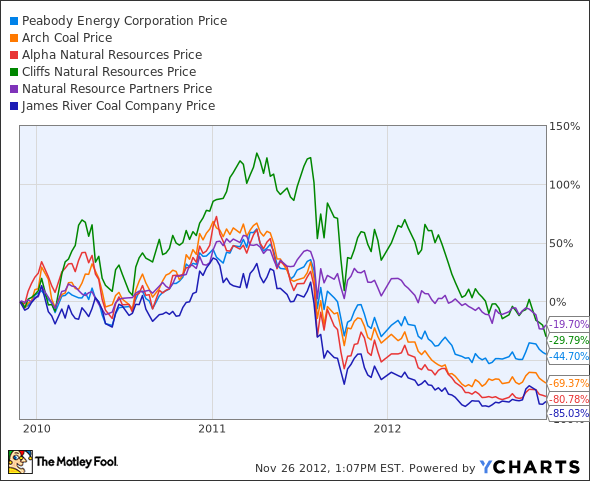 Although every coal company listed here is the red, there's a 65% spread separating the "best," Natural Resource Partners (NYSE:NRP), from the "worst," James River Coal (NASDAQ: JRCC). The three bottom feeders all engage in mountaintop removal, but this probably serves more as an indicator than a reason unto itself. At the root of all these companies' conundrums is their inability to compete in the global energy world. Increasing supply, alternative energy promotion, and environmental regulation all have combined to deliver a damning blow to coal's future.

As fellow Fool Travis Hoium recently wrote, coal companies can't even afford to stay the course. Coal-fired power plants are reaching their expiration dates, and capital intensive renovations are out of the question for many of these cash-strapped companies. It just doesn't make sense to create infrastructure for a dirtier, more expensive energy source.

Eastward, ho!
But the doom and gloom days may be overhyped. A Word Resources Institute working paper released last week tells a different story than the stock market nose dive investors have witnessed over the last few years.

Even as domestic coal production has dropped, global electricity demands are ramping up demand for coal-fired power plants around the world. In contrast to the Union of Concerned Scientists' report that "as many as 353 coal-fired power generators in 31 states are no longer economically viable," international outlooks are downright peachy. The World Research Institute's global assessment counts 1,199 new coal-fired power plants currently proposed for construction. Their combined electrical output would equal 1.4 million megawatts, four times that of the current coal-fired power plant capacity of the U.S.

These proposals come from 483 companies and span 59 countries. It'll come as little surprise to seasoned investors that China and India account for 76% of the proposed capacity. These two countries currently consume 46% and 9% of coal, respectively, while the U.S. maintains its No. 2 spot at 13%.

The top-five, state-owned, Chinese power companies ("The Big Five") are responsible for 18.5% of all proposed plants, and India's state-owed NTPC accounts for another 4%. And according to a State Electricity Regulatory Commission report, the financial returns have recently been more bust than boom. In 2011, the Big Five lost $2.4 billion.

Fewer than half the companies proposing new plants are private sector, and nine of the 10 top companies in terms of proposed plants are state-owned. None of the U.S. coal companies mentioned above made the list.

Foolish bottom line
The International Energy Agency recently announced that coal demand could rise by 21% by 2035, and the World Resource Institute's report further supports the theory that global coal production is on the rise.

But the question that savvy investors are asking themselves is: Do coal companies have a sustainable competitive advantage in the energy sector? I think not. State-run Asian enterprises own the future of coal, and they will operate regardless of price.

Coal stocks have been beaten down, and it's tempting for investors to want to grab one out of the bargain bin. But beware the bite, as environmental regulations and natural gas prices continue to kick coal to the sidelines in markets where value propositions matter. Look beneath the numbers, and you'll see that coal's shiny luster is nothing more than fool's gold.