Yesterday, after earnings fell short of Wall Street's expectations, The Fresh Market (NASDAQ: TFM) took a massive beatdown, and shares closed out the day down 12%. It was a sharp turn for the grocer, which has had an incredible year so far, with its shares up 37%, even after the fall. So what went wrong last quarter, and is this the sign of a slowdown, or is Fresh Market just in the middle of a temporary setback? Here are the three most important areas for investors to watch.

The slowdown in same-store sales
Using the term "slowdown" is a bit of a misnomer. Slowing down means that things are moving at a rate that's below their previous rate. That's only true of same-store sales compared to the previous two quarters, when they were up over 8%. But compared to last year, Fresh Market grew same store sales by 5.6%. That's nothing to shrug at, and it falls in line with the company's year-long goal of hitting same-store sales increases in the range of 5.5% to 6.5%.

The key for investors here is to see that number increase over the next quarter. While coming in around 5% would be good growth by most standards -- Kroger (NYSE:KR) grew same-store sales by 3.2% last quarter -- investors need to have their confidence restored. In order to signal to the market that this isn't a true slowdown, Fresh Market needs to show a bit of the strength it had in the first half of the year. Investors should be hoping for same-store sales above 6.5%, which would be a full point higher than this quarter, and which would restore a bit of the confidence that needs to go along with a P/E ratio over 40.

New locations
For Fresh Market, one of the biggest advantages it has over competitors is its relatively small size. The company was founded in the Southeast and, while it's now pushing beyond those borders, it still has a long way to go. Just last quarter, the brand opened its first store in California. To give some context, Fresh Market's most direct competitor, Whole Foods (NASDAQ:WFM), operated 22% of all its stores in California at the end of its last fiscal year. Fresh Market now has one.

The new store got a lot of face time on the most recent call, which focused on its role as the leader in a move to open more stores on the West Coast. Investors should be very excited by the potential that those stores have, and Fresh Market already has plans to move quickly to open new stores across the state. In addition to the California stores, keep an eye on the push into Texas, which starts next year.

Texas is the home of Whole Foods, and Fresh Market is going to benefit from Whole Foods effectively prepping the state for the business model. It will also benefit from the existing Whole Foods store footprint, which should help Fresh Market design its own store distribution. While that story will take longer to play out, it has a lot of potential, as well.

Watch the market
Now that we're down to brass tacks, let me make this clear -- I think The Fresh Market has a lot of room left to run. The company has been subject to high expectations and wild variances in stock price just in this year. While past performance is not an indicator of future events, have a look at the company's share price. 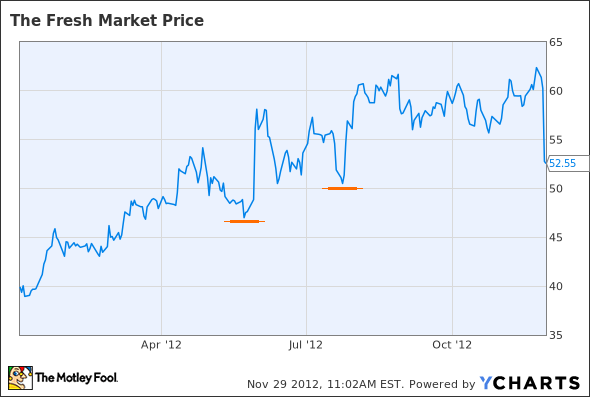 See those two bounces? That's how the stock has responded to falls this year. Now, neither of those were bounces in a vacuum. The first came from an earnings release in which management increased its earnings estimate for the year. The second bounce came off the back of a Deutsche Bank upgrade of the stock. The key is that nothing about the business changed, just the market's interpretation of the business.

The bottom line
With a stock that has this much potential and expectations this high, perception is almost more important than performance. I think Fresh Market is a good long-term play for those interested in rapid growth. The business is going to get hammered along the way, as it did this week, but it's going to recover. With the expansion into California and Texas, Fresh Market is just getting started. Whole Foods may have the brand recognition right now, but that might not last forever.