Please ensure Javascript is enabled for purposes of website accessibility
Log In Help Join The Motley Fool
Free Article Join Over 1 Million Premium Members And Get More In-Depth Stock Guidance and Research
By John Maxfield - Nov 30, 2012 at 9:40AM

Should investors interpret these recent moves by Chimera to mean that the company is in the initial stages of liquidation?

Something odd is going on at Chimera Investment Corp. (CIM -0.22%).

At the beginning of August, the struggling mortgage REIT published a press release announcing that it plans to initiate a "regular quarterly dividend of $0.09 per share for each of the third quarter and fourth quarter of 2012."

While I didn't think anything of it at the time, the company announced today that its board decided to "maintain a quarterly dividend of $0.09 per share for each of the first quarter and second quarter of 2013." And in the same release, Chimera said that its independent board members have "agreed with the Company's manager, Fixed Income Discount Advisory Company," a wholly owned subsidiary of Annaly Capital Management (NLY -0.95%), "to reduce the management fee to 0.75% from 1.50% per annum."

Why this is odd
This is odd is for two reasons. First, as you can see in the chart below, neither Annaly nor Chimera have a history of paying stable dividends. This is because, as Chimera has stated in previous press releases, most recently this one: "the Company distributes dividends based on its current estimate of taxable earnings per common share," which vary depending on any number of variables including prepayment rates, net interest margin, and funding costs. 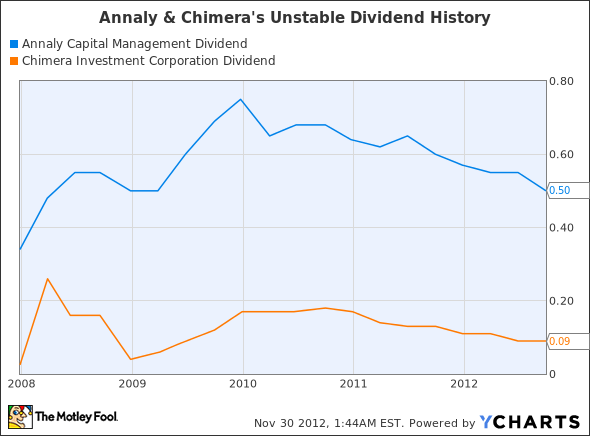 And second, because of the following seemingly innocuous clause that many of analysts had overlooked in the last three press releases (here, here, and here, respectively) announcing dividends, "portions of which may be ordinary income, capital gains, or a return of capital." For the sake of clarity, it's the latter two, and particularly the intimation that it's returning capital, that are especially troublesome. As the company goes on to note: "For the first three quarters of 2012, Chimera has paid cash dividends totaling $0.29 per common share. Of this amount, $0.06 is currently expected to be characterized as a return of capital for federal income tax purposes."

So what does this mean?

The honest answer is: Nobody but executives at Chimera and Annaly know -- though, I think it's safe to say it isn't good. As I've discussed on multiple previous occasions, such as here and here, Chimera hasn't filed its annual and quarterly statements with the SEC for well over a year now. In addition, it's restating every previous financial statement it's filed since September of 2008, which, by the company's own admission, can "no longer be relied upon." For those of you who haven't followed this story, that's effectively every financial statement that it's filed as a public company, since the company didn't take shape until the end of 2007.

The issue has to do with how it accounted for the deterioration in the value of its non-agency mortgage-backed securities. Chimera previously recorded the unrealized losses in its shareholders equity account. However, it claims to have since come to the conclusion that it should have been recognizing the losses on its income statement. The estimated net result is to decrease Chimera's net income over the period between 2008 and 2011 by a staggering 66%, from $1.06 billion down to $367 million.

To make matters more interesting, the purported errors seem to have occurred right under the nose of Chimera's CFO, A. Alexandra Dehahan, who is perhaps not coincidentally the sister of Annaly's CEO Wellington J. Denahan. As a side note, Chimera has an unfortunate tendency to hire relatives of its managing company's executives and board members -- that is, Annaly. And to add insult to injury, in the middle of March, Chimera fired its independent auditor Deloitte & Touche, which had been with the mortgage REIT since its inception.

Indeed, literally the only tidbits of current information we have to go off are irregular updates announcing the company's GAAP and economic book values. Most recently, the figures came in at $3.08 per share and $2.87 per share, respectively.

So, is Chimera liquidating?
With the above discussion in mind, and as I alluded to in the title, you'd be excused for concluding that Chimera is having serious financial problems and may have chosen to liquidate -- and thus the recent moves to return capital -- as opposed to fight it out.