Please ensure Javascript is enabled for purposes of website accessibility
Log In Help Join The Motley Fool
Free Article Join Over 1 Million Premium Members And Get More In-Depth Stock Guidance and Research
By John Maxfield - Dec 3, 2012 at 9:52AM

Here are six reasons investors should avoid Annaly and Chimera.

I can't think of two companies that investors should fear more than Annaly Capital Management (NLY -1.17%) and Chimera Investment Corp. (CIM -0.11%). Here are six reasons why.

1. Chimera's questionable accounting
I've written about this on multiple occasions -- most recently, here. As a result, I won't go into detail about it now.

Very briefly, the problem is twofold. First, because of a purported misunderstanding of accounting rules, Chimera hasn't filed an annual or quarterly financial statement with the SEC for over a year now. It has until the middle of January to do so if it wants to avoid being delisted from the NYSE.

Second, and for the same reason, the company is refiling almost every financial statement it's published since going public -- the only exceptions are the first two quarters of 2008. According to Chimera's own estimates, the restatements will reduce its net income over the effected time period by a staggering 66%.

2. Nepotism at Annaly and Chimera
The reason you shouldn't excuse these errors, whether they were intentional or not, is because they happened under the purview of Chimera's chief financial officer, Alexandra Denahan. If you're an investor in either of these companies, this name may sound familiar, as Alexandra is the sister of Annaly's co-founder and now-chief executive officer Wellington Denahan. (Chimera was both founded and continues to be managed by FIDAC, a wholly owned subsidiary of Annaly.)

While nepotism isn't categorically bad, there are three things that make it troubling here. First, in light of the accounting problems, it appears that familial considerations outweighed merit and experience in the hiring of Chimera's CFO. Second, nepotism is an ingrained part of Chimera and Annaly's culture; at least two additional executives at Chimera are related to board members at the companies. And finally, Chimera is a public company -- that is, it's not the personal piggybank or job placement agency for the families of Annaly's executives and directors.

3. Annaly's board ignores shareholders
There are some things that are just so blatantly wrong, all I can do is shake my head. What happened at Annaly's 2011 shareholder meeting falls into this category.

Shareholders were asked at the meeting to vote on the frequency of say-on-pay votes -- these are nonbinding measures designed to gauge shareholders' approval of executive compensation levels. While the board recommended that votes be held every three years, the shareholders voted overwhelmingly in favor of having them every year -- 102 million votes in favor of triennial votes vs. 268 million in favor of annual votes.

Which policy do you think the board adopted? If you guessed its own, you'd be right. Now, to be fair, it has since reversed the decision, but it took the directors a full year to do so.

At the same meeting, moreover, a majority of shareholders voted against reelecting Jonathon Green to Annaly's board of directors -- 197 million against vs. 178 million for. Annaly's board nevertheless chose to reelect him. The reason?

Among other things, the Board considered Mr. Green's unique qualifications, including his significant experience as a chief executive of a real estate company, his diverse and significant background in the real estate industry and his legal expertise; his past and expected future contributions to the Company; his significant exposure to the Company's business and industry through length of service on the Board; his historical participation and contributions at Board meetings and communications and commitment regarding future attendance and scheduling; his commitment to the success of the Company; the overall composition of the Board; and the likely reason why Mr. Green received more "Against" votes than "For" votes.

Consequently, if you're a shareholder of Annaly, don't waste your time filling out its annual proxy statement. The board of directors doesn't care what you say anyway.

4. Past problems of Annaly's founder, Michael Farrell
I hate to bring this up in the wake of Farrell's passing, but it's important for investors in Annaly and Chimera to know because it helps to explain the toxic culture at these companies.

In the same year that FIDAC was founded -- FIDAC is a subsidiary of Annaly and serves as the cockpit of the Annaly family of companies -- Farrell, the co-founder of both FIDAC and Annaly, was censured by the NASD, fined $150,000, suspended "30 days from associating with any member of the NASD," and had his securities license revoked. The charges? Among other things, "filing inaccurate [regulatory] reports," "filing [an] incomplete and inaccurate annual audit," and keeping "inaccurate books and records."

5. Annaly's compensation structure incentivizes questionable behavior
If you want executives to do something, give them monetary incentives to do so. As Charlie Munger, the vice chairman of Berkshire Hathaway (BRK.A -0.27%) (BRK.B -0.14%), has said: "I've been in the top 5% of my age cohort all my life in understanding the power of incentives, and all my life I've underestimated it."

In Annaly's case, its executives are incentivized to do one thing: issue new shares. As I've discussed previously, its executives' bonuses are tied to book value, which, due to peculiarities of the mREIT business model, principally grows by issuing more shares.

Under this model, Farrell made an astounding $35 million in 2011. This was more than virtually every banker took home last year, including Jamie Dimon at JPMorgan Chase (JPM -0.45%), Lloyd Blankfein at Goldman Sachs (GS 1.26%), and Larry Fink, who oversees BlackRock (BLK -1.77%), the world's largest money manager with nearly $4 trillion in assets under management. 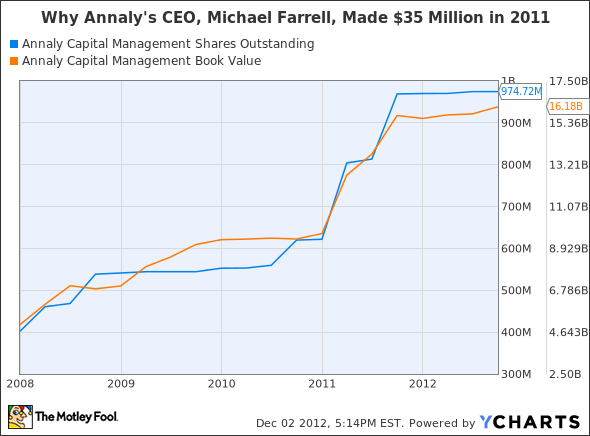 6. Chimera may be liquidating
Finally, as I discussed last week, there's evidence that Chimera may have begun liquidating its portfolio in the third quarter of 2012. In a recent press release, the company stated: "For the first three quarters of 2012, Chimera has paid cash dividends totaling $0.29 per common share. Of this amount, $0.06 is currently expected to be characterized as a return of capital for federal income tax purposes, although this estimate will not be finalized until the Company files its 2012 tax return."

While we won't know for sure whether this is the case until Chimera makes its requisite filings next year -- assuming, of course, that it does so before being delisted by the NYSE -- I personally wouldn't wait around to see unless you're doing so simply as a speculative move.

Take your capital elsewhere
There are thousands of publicly traded companies that, for the six reasons discussed above, deserve your money more than Annaly and Chimera. If you're nevertheless committed to the former, the least you can do is read our new, in-depth report on the pioneering mortgage REIT. To access this report instantly, simply click here now.