Please ensure Javascript is enabled for purposes of website accessibility
Log In Help Join The Motley Fool
Free Article Join Over 1 Million Premium Members And Get More In-Depth Stock Guidance and Research
By Sean Williams - Dec 5, 2012 at 8:55AM

After week's of voting, the Motley Fool community has chosen its worst CEO of the year.

Following eight straight weeks of profiling this year's most dubious CEOs, and three rounds of actual community voting, it's time to unveil which CEO has been named the Motley Fool community's worst CEO of 2012.

The methodology behind the voting was simple. Similar to an NCAA-style basketball bracket, the original eight CEOs were pitted into four matchups three weeks ago that the community had one week to vote on. Two weeks ago we released the results of the previous week's voting, and the remaining four CEOs were again bracketed for voting. Last week we unveiled last week's results and bracketed the top two CEOs for a final round of voting.

As you can see with the way this entire process played out, the ball really was in your court, and the Motley Fool community was able to have a say in who merits the unwanted title of The Motley Fool's chosen worst CEO of the year.

So without further ado, let's get to the results! 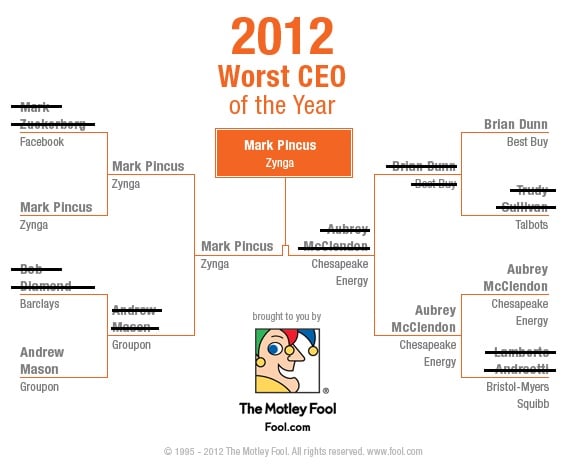 Just because Chesapeake's Aubrey McClendon finished second in the final round of voting by a tally of 55% to 45% doesn't mean he wasn't responsible, at least in part, for Chesapeake's share price languishing in 2012. With poor corporate governance being a common theme for McClendon throughout much of his tenure as CEO, he may yet again find himself in contention for this dubious honor in future years.

But enough of the runner-up; let's examine what made Zynga's Mark Pincus the rotten egg of CEOs in 2012.

I think the headline that describes Zynga's failures is the mass of talent that walked out the door in 2012. Despite efforts to retain high-level executives with lucrative compensation packages, close to a dozen executives left for different farms this year -- a crippling number considering that Zynga relies on research and development and innovation to drive its bottom-line figures.

The executive exodus under Pincus took a nasty toll on both Zynga's share price and its results, which never came close to matching Wall Street's lofty expectations. Since hitting a peak price of nearly $16 earlier this year, Zynga shares have shed a horrifying 86%. Also, in spite of a 27% increase in users in its most recent quarter, monthly unique payers fell 28%, meaning simply that even fewer and fewer people are paying for its games.

Worse yet, R&D costs are going through the roof. Zynga's R&D costs are up 82% year to date, which is high relative to Glu Mobile (GLUU) whose R&D costs spiked by "just" 54% year to date -- although both companies have taken to layoffs in order to trim costs. According to Electronic Arts' (EA 0.96%) vice president, Jeff Brown, next-generation gaming costs could soar by as much as 200%, which bodes even worse for Zynga's near-term profitability.

The final nail in the coffin, though, came during the final round of voting, when Zynga and Facebook (META 7.19%) amended their working relationship to "just acquaintances." Facebook, which currently accounts for nearly all of Zynga's revenue, will now be free to develop its own games, and Zynga, in return, will no longer be required to route all login and payment info through Facebook. With such vast revenue exposure to one site, this could be Zynga's downfall.

Since he'd cashed out a good chunk of his holdings long before Zynga plunged, it's not hard to see why Mark Pincus donned the red bull's-eye of investor hatred in 2012. I thank you and your fellow Motley Fool community members for wisely choosing a deserving candidate for worst CEO of the year!