After going public at the end of 2011, social gamer Zynga (NASDAQ:ZNGA) has crashed and burned this year. Shares have now lost three-quarters of their value this year as the company's monetization and transition away from Facebook's (NASDAQ:FB) platform are in doubt. 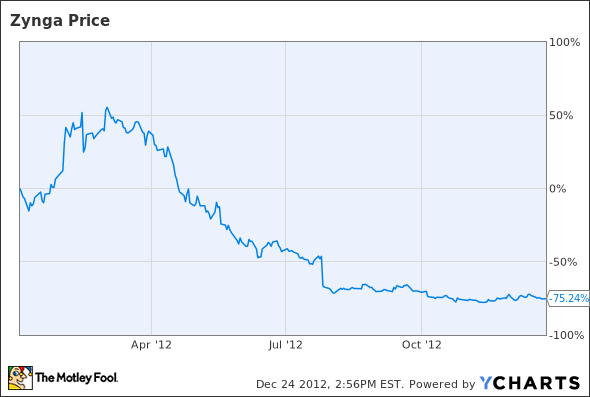 What caused Zynga to plummet so hard and so fast in 2012?

Zynga's public starting point was an enormous $8.9 billion valuation, immediately making it worth more than longtime rival Electronic Arts (NASDAQ:EA). The business itself is a risky proposition as Zynga was an early pioneer with the freemium model.

Without an upfront cost to play, Zynga has garnered a large following of 311 million monthly active users, or MAUs. The main problem, though, is that many of them are freeloaders and don't spend real dollars purchasing virtual goods, as the percentage of paying players is consistently less than 2% of unique users.

Farewell, Facebook
Casual gaming has been shifting away from desktop platforms like Facebook and toward mobile ones, which is one reason why Zynga has been trying to transition away from the social networker. Zynga has made a lot of progress on this front, and where once it relied on Facebook for 94% of both bookings and revenue, those respective figures have declined to 80% and 84% last quarter. 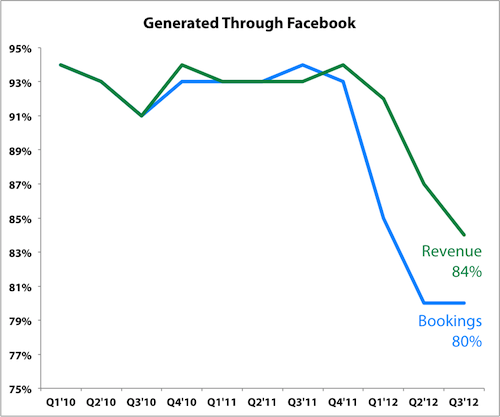 Zynga is further distancing itself from Facebook as the two recently disclosed several amendments to their developer addendum.

OMG drop
Much of Zynga's transition has been pursued through acquisitions of mobile game developers. The inherent risks in this type of strategy are embodied best by the purchase of OMGPOP, which Zynga made earlier this year for $183.1 million in cash.

The criticism of the OMGPOP deal turned out to be spot on, as just seven months later Zynga was forced to eat goodwill impairments and restructuring charges that totaled more than half of the total purchase price.

Why so not serious?
There's an even bigger strategic transition taking place at Zynga. The company has historically specialized in casual games that appeal to a wide range of users, aren't too complex, and don't require a lot of commitment in either time or money. The trouble is that those types of gamers are typically less engaged and don't monetize as well. For example, rival game developer Kixeye, which focuses on the hardcore genre, brings in approximately 20 times the revenue per user than Zynga, but over a much smaller player base.

If you build it, they will leave
Since August, Zynga has been suffering a massive executive exodus, with high-level talent bailing. The company's plunging stock price has hindered the retention effects of some of the equity bonuses some were given to join up, and CEO Mark Pincus had restructured Zynga's organization hierarchy at the time.

The list of ex-execs includes two out of the three EA execs that Zynga poached, along with numerous C-level defections like CFO David Wehner, CTO Allan Leinwand, and Chief Creative Officer Mike Verdu, among many others.

The last cut is the deepest
As a result of its missteps this year, Zynga has had to slash its fiscal 2012 guidance numerous times throughout the year. Here's where outlook kicked off the year and how it's closing out the year.

Those are some gloomy revisions for investors to come to terms with over just eight months, which may partially explain why shares are down 75% year to date. The bad news for shareholders is that more pain is likely in store.