The more natural gas produced, the cheaper it becomes. That basic truth of supply and demand makes natural gas much more attractive for countries around the world that must import fossil fuels to meet energy needs, such as Japan.

As part of this trade, for the first time, a tanker carrying liquefied natural gas is traversing the Arctic in a route from Norway to Japan. There will also be a greater demand for imported natural gas to produce electricity in Japan and Germany due to each country's commitment to do away with nuclear power.

A boost for the global economy
Declining economic activity around the world due to the Great Recession reduced the demand for shipping. That naturally resulted in charter rates falling to 10-year lows. The overbuilding that took place before the onslaught of the recession exacerbated the situation. These factors have contributed to collapsing sales and earnings per share, and accordingly bearish stock price performances for individual shipping companies, as shown in the table below:

Source: Finviz; *Ship Finance International charters vessels so it has avoided much of the carnage inflicted upon ship owners

There are great expectations that fracking will change this course and revitalize economic growth. In an article by Motley Fool contributor Morgan Housel, "The Coming Boom," he describes how the increased production of natural gas has already lowered by $175 billion the amount the United States has spent to import oil, extra capital that now can produce more economic growth in the U.S. Fracking could also create an estimated 1.3 million energy-related jobs in the next seven years, according to the article.

The increase in natural gas production, along with the lower prices, could generate a significant amount of new economic activity around the world, increasing the demand for vessels of all types to haul goods, which is exactly what the shipping industry needs. As the chart below shows, the exchange traded fund for shipping has more than doubled from the bottom of recession in early 2009, although it has fallen due to the recent faltering economic growth in China and India: 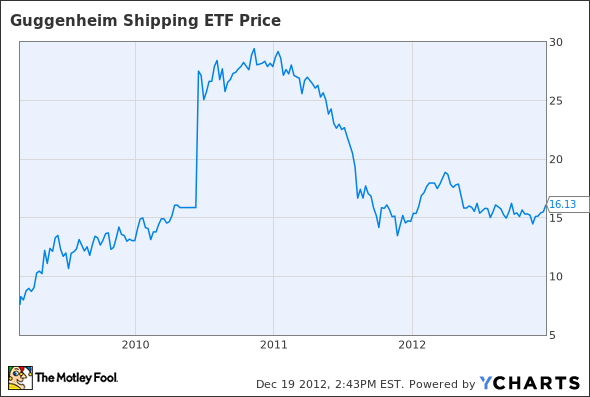 By contrast, more economic growth should result in a need for more shipping, which will lift the charter rates.

A Fool sets sail for higher gains
Foolish investors should follow United States Oil (NYSEMKT:USO), which tracks the price of U.S. oil, since shipping fortunes follow the price of fuel. If fracking results in the price of oil falling due to a greater demand for natural gas, then shippers will benefit.

As detailed in a previous Motley Fool article, Ship Finance International, which charters vessels, is one company in the shipping industry that is attractive. Chartering allows for Ship Finance International to shift the risks of the vagaries of the shipping industry to its clients while still benefiting from better conditions in the sector, such as the a lower cost of fuel. If natural gas drives down the price of oil, Ship Finance will benefit without the same risks as shipping companies that operate fleets.