It was always bound to happen. The iPhone family was always destined to expand. It couldn't be a one-product-per-year family forever. Is Apple (NASDAQ:AAPL) preparing to launch a low-cost iPhone like The Wall Street Journal suggests?

Keep in mind this isn't the first time that WSJ has reported such talk, as it ran a similar article nearly two years ago in February 2011. In fairness, both reports likely have legs to them and Apple has undoubtedly been prototyping and testing cheaper iPhones for years. The real question is whether or not it would pull the trigger and release such a device to the masses.

What to expect when you're expecting a low-cost iPhone

One way of making the iPhone cheaper could entail using a polycarbonate shell. While some may see that as threatening the premium brand image that Apple enjoys with the iPhone, it's not as if people aren't used to buying plastic flagship smartphones from other manufacturers.

In fact, nearly all of Samsung's phones are housed in cheap plastic, and that hasn't hurt Galaxy S3 sales much. Samsung is even casually known as the "King of Plastic" among Google (NASDAQ:GOOGL) Android loyalists. In a brief departure from the South Korean conglomerate's plastic practices, Samsung's new ATIV S running Microsoft (NASDAQ:MSFT) Windows Phone features an aluminum casing.

Besides, the iPhone 3G and iPhone 3GS were both made out of polycarbonate, and those models sold just fine.

Apple could also put older parts in the device to lower the cost. The older A4 or A5 chips would fit the bill quite nicely. The company's also taken to using older 5-megapixel image sensors from OmniVision Technologies (NASDAQ: OVTI) in other products. That was the same backside-illuminated sensor originally found in the iPhone 4 in 2010, but is now found in the iPad. Maybe OmniVision could get an iPhone seat back, even if it's not the flagship.

Family portrait
The WSJ makes it sound as if an expanded iPhone family is now only possible because of Tim Cook, saying that Steve Jobs "prioritiz[ed] profits over scale and offered a relatively small number of products mostly targeted at the high end." That's only partially true. Apple's always been known for its focus on product depth, but at the same time look at what happened to the iPod as it matured: it expanded. 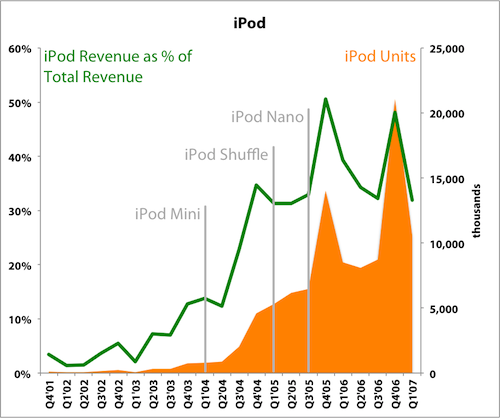 This chart starts with the launch of the original iPod and ends right before the iPhone and iPod Touch were launched. As the iPod became increasingly important to the overall business, Apple introduced new models: the Mini, Shuffle, and Nano.

More importantly, these offspring were moves downmarket to target lower price points. This was all under Jobs' tenure, so clearly expanding an important product family isn't unique to Cook. The iPhone has been a once-per-year affair for six generations, longer than other families, but now is the perfect time to multiply. Apple just did this exact thing with the iPad Mini, and now the iPad family has two distinct devices for different market segments.

In doing so, Apple will also address one of its biggest risks: its concentrated product portfolio. A major risk with the one-model strategy has been if the device flops, it would be catastrophic to Apple's business. With a multimodel strategy, hopefully there will be something for everyone.

Don't ever expect Apple to offer 54 different models, like Samsung currently does between its Android and Windows Phone offerings, but it's very likely Apple could eventually transition to a three- to five-product family with the iPhone. I expect Apple to move both downmarket and upmarket with a lower-cost iPhone as well as a larger iPhone, in addition to the standard model.

Are we there yet?
Tim Cook has talked before about pricing umbrellas, saying Apple doesn't want to leave much room for competitors to invade from below. Moving to a lower-cost iPhone plays perfectly into those comments and would do wonders for Apple abroad. The company is already dominating the domestic market, but emerging markets (and even some developed ones) are tough to crack without carrier subsidies.

Naturally, some will fret over cannibalization, which is a bit curious since Apple itself doesn't worry about the idea. Instead, it focuses on offering products that people will line up to pay premiums for relative to competing gadgets, and trusts that the bottom line will take care of itself. So far, it has.