The U.S. will produce more oil than Saudi Arabia? And be net energy self-sufficient? For one of the largest consumers of energy in the world, this seems like big news! But when you dig deeper into the headlines, these two forecasts actually don't mean much.

A quick sound bite
Articles about the U.S. producing more oil than Saudi Arabia before 2020 abounded after the International Energy Agency's released its outlook in November. While such a comparison to the current No. 1 oil producer makes for an attention grabbing headline (Saudi Arabia must produce a gazillion barrels!), the fact is that if the U.S. overtakes Saudi Arabia, it will be just another switch of top place producers. There are no medals or extra points for being the top oil producer.

The other fact the report highlights, that the U.S. will be self-sufficient in net energy, is much more complex of a statement. For one, the U.S. is still a long way off from achieving this, and if we do, we will still be very dependent on other countries to to fill up our needs. 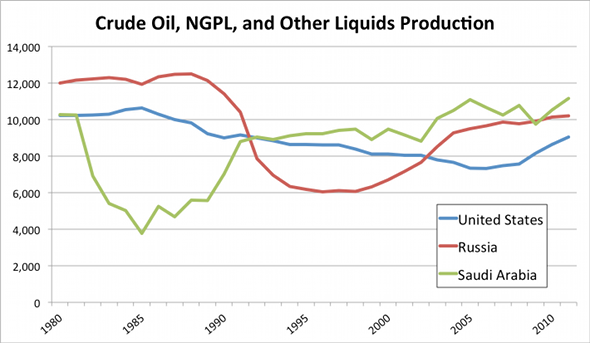 Figures in thousands of barrels per day. Russian figures 1991 and earlier from the Soviet Union. Source: International Energy Statistics.

The U.S. already beat Saudi Arabia in petroleum production in the 1980s, and only since 1991 has Saudi Arabia been producing more petroleum than the United States. Russia also remains a top contender, especially after its transition from the Soviet Union.

What might matter more than these absolute figures is how much of the total market they make up. Since the early 1990s, all three countries have made up less than 15% of the world's total: 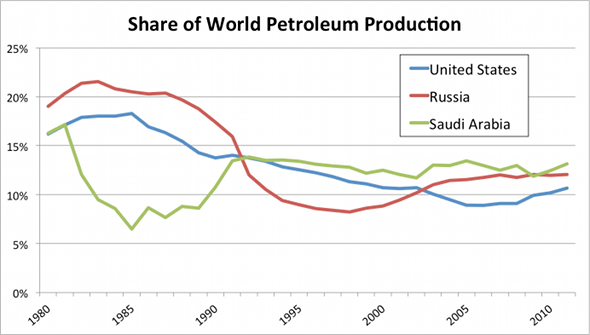 First, second, or third, the U.S., Saudi Arabia, and Russia will remain top players in energy. The same report that says the U.S. will overtake Saudi Arabia by 2020, states Saudi Arabia will gain the lead again in the mid-2020s. But oil production isn't a race, and places don't matter.

The road to energy independence
A much more important forecast from the report is that the U.S. will be self-sufficient in net energy by 2035. What should you know about this prediction?

For one, it may never happen. If you take a look at the Energy Information Agency's 1979 forecast (link opens PDF), 2010 was supposed to be a year that had $43 per barrel of oil and when we'd be using 40 quadrillion Btus worth of coal. Instead, in 2010 oil was about $70 per barrel and we only used a little over 20 quadrillion Btus of coal.

Long-term predictions are extremely difficult. The current gap in energy production versus consumption is proportionally as large as it was in the late 1990s, and any new developments that might take the unconventional energy production off of forecasts would keep the U.S. far from producing as much energy as it consumes. 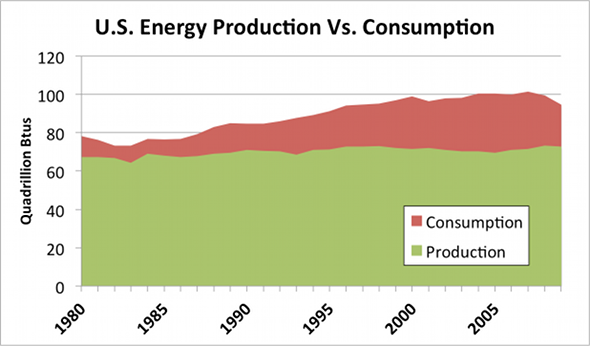 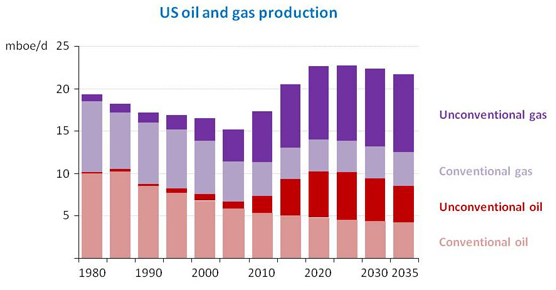 Fracking, which helps unlock unconventional sources of energy, remains controversial and regulation aimed at limiting the negative effects of climate change could easily change incentives in energy production and consumption.

If America does become net energy self-sufficient, however, it will still remain dependent on global markets. In 2035, the forecast is for the U.S. to have a 5% surplus of natural gas compared to the 11% deficit in 2010. But, the U.S. will still need to import 36% of oil in 2035, compared to 49% in 2010. While that makes the U.S. less dependent on foreign energy, it's far from true self-sufficiency.

To achieve true energy independence, American transportation and industry would need to run more renewable energy and on the natural gas that will make up a majority of our energy production, likely to be led by ExxonMobil (NYSE:XOM) which currently produces the most natural gas in the U.S.

Read more than headlines
While producing more energy will give America a stronger industry and revenue stream, producing more than Saudi Arabia for a few years means very little, and being net energy self-sufficient is very different than energy independent.