For midstream companies, the dynamics of the oil and gas space in the U.S. have fundamentally shifted. Rather than moving from import terminals to feed the American machine, production now wants to start moving oil and gas in the other direction. Unfortunately, not every company is well suited for this transition.

Despite being one of the largest midstream companies in the U.S. by market cap, Enterprise Products Partners (NYSE:EPD) has positioned itself well to take advantage of this changing dynamic. Let's look at how this midstream giant has positioned itself well to handle the new demands of American energy and how it has generated a near monopoly on one segment of the oil and gas space.

A liquid state of mind
When we speak of the oil and gas space, we forget there is one other spot in the middle that doesn't get as much attention: natural gas liquids. This more niche fuel has found its day in the sun thanks to its other major use: plastics. Natural gas liquids are composed of about 40% ethane, which can be converted to ethylene, which is a fundamental building block for several different chemicals and plastics and is an essential feedtstock for chemical companies. Up until recently, the cost of using natural gas liquids to produce ethylene was too cost-prohibitive, so many companies used a chemical in oil known as Naptha. Thanks to the American shale boom, though, ethane costs have fallen to the floor, and it is now the lowest-cost option for building chemical feedstocks. 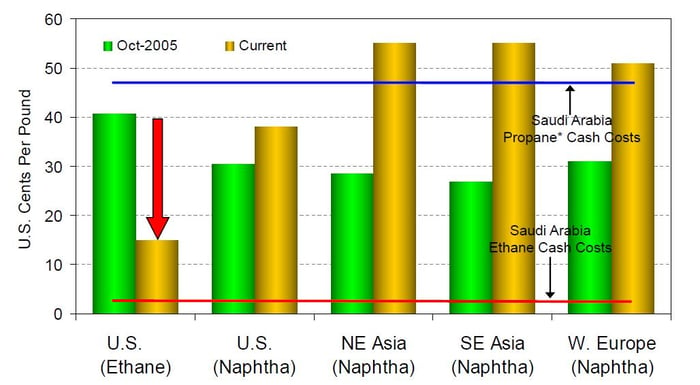 With ethane becoming such an attractive option, cehmical companies are lining up to take advantage of the situation. The American Chemistry Council estimates that about $64.5 billion will be spent on chemical refining capacity expansion between now and 2017. Two of the biggest names in the game, ExxonMobil (NYSE:XOM) and Dow Chemical (NYSE:DOW), each have plans to expand their ethylene processing capacity by 1.5 million tons per year.  ExxonMobil and Dow anticipate that these facilities will come online in 2017 and 2016, respectively.

Holding all the cards
This is where Enterprise comes into play. If any company intends to use NGLs for creating ethylene, they will amost exclusively need to go through Enterprise. The company has a pipeline network that connects it to every ethylene steam cracker and about 95% of all ethylene refining capacity east of the Rockies. Furthermore, it plans to expand its NGL pipelines westward with a $1.2 billion expansion plan as well as an expansion of its Appalachia to Texas Express line. This expansion will link Enterprise pipeline to every ethylene plany in the Unite States.

Moving further down the vlaue chain, Enterprise also has a strong portfolio of downstream assets. With 21 of its NGL own propylene fractionators and a strong network of import and export terminal, the company is in a position to be a big winner in the NGL market for the next several years.

Add all these assets up, and Enterprise has a near monopoly on the movement of NGL in the United States. It also has the keys to one of the fastest-growing markets for natural gas. As a transportation fuel, natural gas is still a few years away before it starts to make a dent in the natual gas market, and Cheniere Energy (NYSEMKT:LNG), the lead U.S. company for exporting LNG, doesn't expect to make a shipment before 2015. Luckily for Enterprise, there are far fewer political hurdles to export natural gas that has been processed into a chemical than it is to export natural gas as a product itself. Expect the company to reap big revenue nyumbers from its NGL structure while the rest of the natural gas industry catches up.

What a Fool believes
Even though Enterprise has a major advantage in the NGL market, it's not a one-trick pony. The company's joint venture with Enbridge (NYSE:ENB) for the Seaway pipeline is one of the crucial links in American energy infrastructure that will bring Canadian oil sands to refiners in the Gulf Coast. This is one of the essential infrastructure pieces that will break the pricing disparity across the United States. The company has also planned to commit more than $4 billion to developing oil, NGL, and natural gas assets throughout the Eagle Ford.

These are just a couple highlights of the largest MLP in America. If you would like to learn more about how Enterprise plans on turning all these projects into profits, check out our premium research report. It will guide you through the billion dollar maze that is Enterprise's asset base and will guide you in making the best decision for your portfolio. Get instant access to this report by clicking here.

For This MLP, It's All About the Liquids @themotleyfool #stocks $XOM $DOW $ENB $TRP $EPD $LNG Next Article
Current