Every investor can appreciate a stock that consistently beats the Street without getting ahead of its fundamentals and risking a meltdown. The best stocks offer sustainable market-beating gains, with improving financial metrics that support strong price growth. Let's take a look at what DryShips' (NASDAQ:DRYS) recent results tell us about its potential for future gains.

What the numbers tell you
The graphs you're about to see tell DryShips' story, and we'll be grading the quality of that story in several ways.

Growth is important on both top and bottom lines, and an improving profit margin is a great sign that a company's become more efficient over time. Since profits may not always reported at a steady rate, we'll also look at how much DryShips' free cash flow has grown in comparison to its net income.

A company that generates more earnings per share over time, regardless of the number of shares outstanding, is heading in the right direction. If DryShips' share price has kept pace with its earnings growth, that's another good sign that its stock can move higher.

Is DryShips managing its resources well? A company's return on equity should be improving, and its debt-to-equity ratio declining, if it's to earn our approval.

By the numbers
Now, let's take a look at DryShips' key statistics: 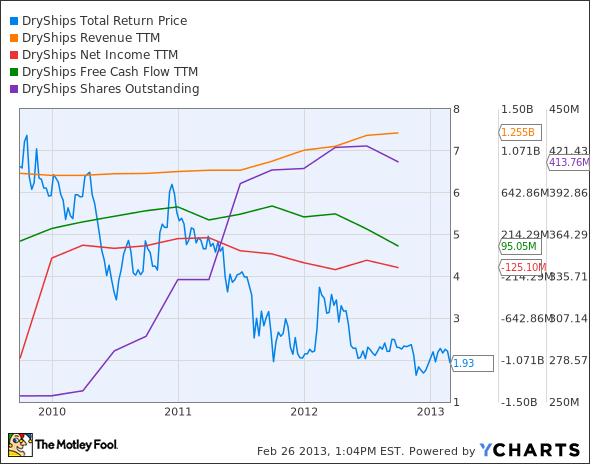 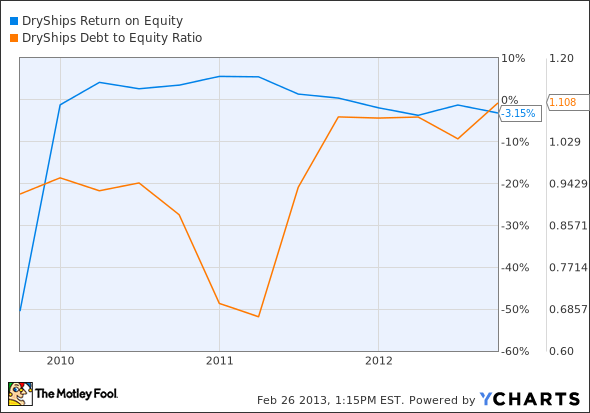 How we got here and where we're going
It has not been a particularly good three years for DryShips. It earns three passing grades largely on a technicality -- the third quarter of 2009 was the last during a period of atrocious recessionary losses for the dry bulk shipper. It remains to be seen whether this will hold true next year, as net income has been in gradual decline since 2010.

DryShips is just one of many shippers in dire straits, as its recent drop comes in sync with Genco Shipping's (NYSE:GNK) poor earnings report, after appearing so desperate to unload incomplete tankers that it paid over $20 million to its "buyer" to get the two ships taken off its hands. Bookending those two unpleasant reports are indications that DryShips is getting somewhat squeezed for cash, as it upped the number of shares it will sell of Ocean Rig (NASDAQ:ORIG). DryShips has held a majority interest in that company since it was first spun off, but it's looking like the offshore driller would be better off on its own.

DryShip's New Year's pop has been slipping away for the past month, and the Baltic Dry Index can help explain why. During our tracking period, this index has dropped 67%, but it's been flat for the past year and retains a slight gain since the start of January after losing a peak reached shortly after DryShips'. Although DryShips' stock price doesn't precisely track this index's movements, it's a pretty close approximation over the long run: 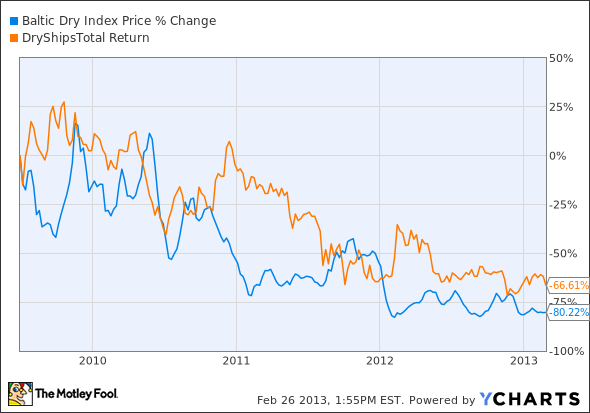 However, there may be some indication that this long-term weakness is about to turn around. My fellow Fool Alex Dumortier notes that private equity firms have begun buying up the debt and assets of shipping companies, and on a cyclically adjusted valuation basis, DryShips has a P/E ratio of less than one, which is lower than nearly any other shipping company except for Excel Maritime Carriers (NYSE: EXM). This valuation is ascertained through the trailing 10-year average of inflation-adjusted earnings per share, which may not accurately reflect DryShips' potential. However, it's certainly worth considering in the scope of our analysis, as the devastation wrought on the shipping industry was and is squeezing weaker competitors to their limits. A reduction in available ships, particularly in a slowly growing global economy, would force prices up industrywide.

Putting the pieces together
Today, DryShips has few of the qualities that make up a great stock, but no stock is truly perfect. Digging deeper can help you uncover the answers you need to make a great buy -- or to stay away from a stock that's going nowhere.

Keep track of DryShips by adding it to your free stock Watchlist.