In that spirit, we three Fools have banded together to find the market's best and worst stocks, which we'll rate on The Motley Fool's CAPS system as outperformers or underperformers. We'll be accountable for every pick based on the sum of our knowledge and the balance of our decisions. Today, we'll be discussing France Telecom (NYSE:ORAN), one of Europe's largest telecom operators.

France Telecom by the numbers
Here's a quick snapshot of the company's most important numbers:

Sources: Yahoo! Finance and corporate earnings releases. Operating data from 2012 fiscal year. *Segment revenues do not add up to 100% due to rounding and write-offs.

Alex's take
France Telecom's numbers don't look especially good, but given the state of the European economy, that's not particularly surprising. Over the past five years, France has not once had a GDP growth rate greater than 1% year over year, and growth contracted in the fourth quarter at the worst rate since 2009. Spain is even worse, as it's been in an outright recession since the middle of 2011. France and the rest of Europe excluding France both posted mobile customer growth rates for France Telecom of just 0.4% in the 2012 fiscal year, and the company's French operations actually saw a 0.9% revenue decline year over year.

In Africa and the Middle East, France Telecom added 7 million new subscribers, for a 9.4% year-over-year subscriber growth rate. Emerging markets offer lower-value subscribers than France Telecom's European home base, so revenue was only up 5.3% in those regions. It doesn't look like France, Spain, or Poland will turn around any time soon to pick up this slack, either: 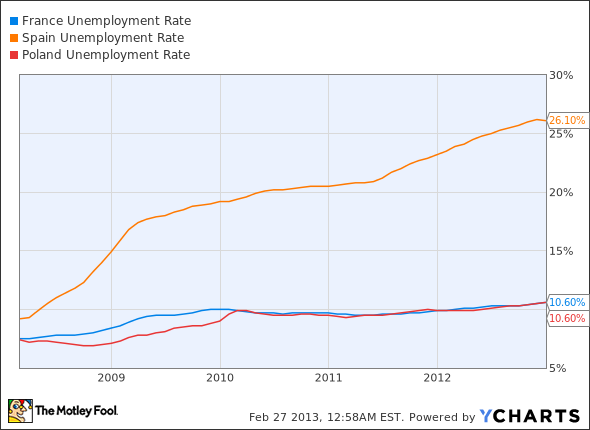 This isn't just a major economic problem for European countries. Even the unemployed might be able to afford a basic cellphone contract, but the longer this structural unemployment persists and grows, the harder it will be for these countries to provide financial support to the jobless. France Telecom's average revenue per mobile user, or ARPU, declined 10% in its home country last year, and the company projects another double-digit ARPU decline in 2013. Operating cash flow (measured as EBITDA less capital expenditures) is also projected to decline by double digits, from the $10.45 billion reported for 2012 to about $9.15 billion this year.

However, it's worth considering whether or not this sell-off has gone too far, and if France Telecom is simply too cheap to pass up. Even if free cash flow declines at a similar rate as the company's projected operating cash flow, it'll still result in $4.8 billion in free cash flow for 2013, for a forward price-to-free-cash-flow ratio of 5.2. If free cash flow declines twice as much as operating cash flow, the P/FCF ratio will still be just 6. That's a more important metric than P/E for telecoms due to their high level of capital expenditures. In fact, why don't we take a look at how France Telecom compares to some other major telecom operators around the world?

France Telecom has a lower price-to-free-cash-flow ratio right now than any of its largest peers. With the exception of AT&T, France Telecom's also the only telecom that supported its past 12 months of dividend payment within the limits of its free cash flow -- although this was just barely managed, and might be difficult to muster this year as cash flow declines loom. The lowest valuation, the highest yield, and a conscious effort made to maintain payouts at a supportable level (the dividend was cut significantly late last year) all make France Telecom look a little less risky than its macroeconomic situation might otherwise indicate.

I'm willing to take a risk on this one, but I'm not going to ride this all the way down to the bottom. If it continues to show long-term weakness as a holding, I'm going to revisit with a different perspective.

Sean's take
Seeing as how this is a holding in my personal portfolio and is one of the 10 companies I've selected for my deeply discounted and highly contrarian One Person's Trash Is Another Person's Treasure portfolio, I'll give you three guesses where I feel it's heading -- and the first two don't count!

France Telecom has three primary things going for it that attracted me enough to make an investment.

First, growth in emerging markets is astounding and should drive bottom-line results even if competition from recent start-up Free Mobile and Vivendi's SFR in France threatens to undercut its pricing. As Alex mentioned, France Telecom's Orange mobile business tacked on 7 million new customers in Africa and the Middle East and that's just the beginning. France Telecom is the third-largest mobile provider in Africa, currently operating in 21 countries, and recently signed an exclusive agreement with Baidu to develop a mobile browser designed specifically for its emerging markets. This isn't rocket science for France Telecom; it's just focusing on mobile and data growth and finding regions where it can execute with little competition and with solid margins.

Second, I find France Telecom's products largely inelastic. As I described in January, mobile and broadband providers rarely have too many competitors to worry about, and, even with the emergence of the cost-conscious Free Mobile, France Telecom held its ground and maintained its 37.4% market share in France. What's more, rather than focusing on lessening package prices, France Telecom has spent quite a bit on upgrading its network in order to charge more for its tiered media packages. You think that'd doom it to losing market share to its peers; but surprise, surprise... it's not!

Finally, France Telecom is a cash flow cow. The company warned investors late last year that it expected operating cash flow to decline by $1.3 billion in 2013 and it slashed its dividend by roughly 45% to a dollar-adjusted $1.05 from $1.85. Still, this puts France Telecom on pace to produce a tad more than $4 billion in free cash flow this year, and, as Alex notes, its price-to-cash-flow is significantly lower than nearly all mobile providers of comparable size, globally. What's more, France Telecom is cheaper now that at any time over the past decade with many of its metrics anywhere from 30% to 50% below their five-year average.

With the company practically yielding 11%, maintaining its vice grip in France while also figuring out ways to control costs, and focusing its efforts on high-growth emerging markets, I see no reason why France Telecom couldn't double from its current levels. Consider this a resounding outperform call.

Travis' take
Now that Alex and Sean have run out of breath, I'll make my case short(er) and sweet.

Now lay those numbers onto the economic situation in the company's biggest markets. France is growing at an anemic rate to say the least, Spain has 25% unemployment with no significant economic expansion in site, and Africa may be the most unstable place in the world to do business. Speaking of Africa -- if everything outside of Europe is so strong, why did the "Rest of World" segment see a 5.8% drop in revenue and a 6.5% drop in EBITDA? There may be hotspots, but the overall business stinks no matter how you look at it.

I don't care if price-to-free-cash-flow looks low right now or if the payout ratio is strong. I want to buy a strong fundamental business, especially in mobile. AT&T or Vodafone, the 45% owner of Verizon Wireless, would make my list -- but not France Telecom.

Note: I'd like to point out that a few months ago Sean and Alex both shot down an outperform on Vodafone, which has major exposure to the U.S., Germany, and India versus France and Spain for France Telecom.

Maybe the stock will outperform if operations turn around, but given the direction things are headed for both the company and the economies it operates in, I'm not willing to take the risk. This seems like a coin flip at best. With that in mind, my opinion is that the stock has "Do Not Touch" written all over it.

The final call
Travis has some strong objections, but the two of us (Alex here) have decided that the low, low valuation and high, high dividend of France Telecom merit a closer look and an outperform call in our TMFYoungGuns CAPS portfolio today. We may have to revisit this in a few months if operations deteriorate beyond what the company expects for the current year. We've racked up 328 points in the past year by beating the indexes with smart choices, and the last thing we want is to drag that record down with an ill-considered value trap.