Renren (NYSE:RENN) beat estimates when it reported results earlier this month. But the stock is still down, largely because of lighter-than-expected guidance.

Forget for a moment that Wall Street blew it by publishing erroneous first-quarter quarters. If some investors still hate Renren, one of China's largest social networks, it's because the company falls far short of Tencent Holdings' (OTC:TCEHY) Pengyou when it comes to engaging users:

Comparisons with Facebook (NASDAQ:FB) are no longer accurate. What's a better comparable? Zynga (NASDAQ:ZNGA), which derived 86% of its 2012 revenue from its relationship with Facebook. Renren's gaming operations doubled revenue last year and, as of Q4, now account for 50% of all sales. By contrast, advertising revenue fell 16.7% in the fourth quarter and 10% for the year.

CEO and Chairman Joseph Chen said in a press release that the data reflects a transition period for Renren, saying he was "encouraged" by advances in mobile and gaming. Whether this shift should get investors as excited is matter of debate. Either way, there's no disputing the company's sturdy position: 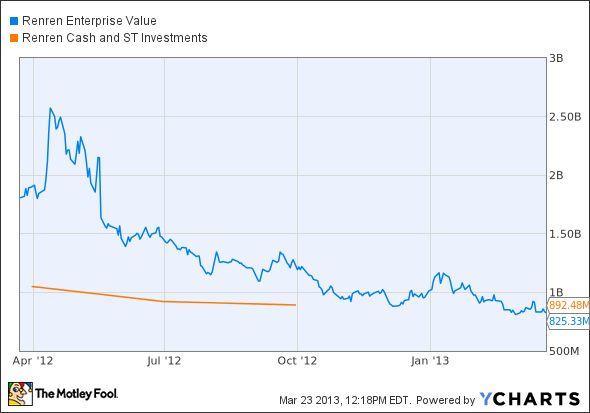 By the looks of it, investors have given up hope that Renren will grow from here. All but $240 million, or 22%, of the company's U.S. market value is denominated and cash and short-term investments. Any meaningful gain in profits from mobile and gaming could send this stock soaring.

Would you buy Renren at current prices? Would you short? Let us know what you think in the comments box below.

1 Reason to Hate Renren, and Why It Might Be Misguided @themotleyfool #stocks $RENN $TCEHY $FB $ZNGA Next Article
Current