Please ensure Javascript is enabled for purposes of website accessibility
Log In Help Join The Motley Fool
Free Article Join Over 1 Million Premium Members And Get More In-Depth Stock Guidance and Research
By Tyler Crowe - Apr 6, 2013 at 7:37AM

As much as we would like America's energy renaissance to turn the entire industry on its head, it's just not the case. Here's why.

Despite the previous woes of the American energy industry, there is a wave of optimism around the production of domestic energy. We may have a long way to go before we can consider ourselves energy independent, but we're heading in the right direction.

Whenever times are getting better, it's easy to get caught up in hyperbolic rhetoric. Mostly because we want things like $2.50 a gallon gas and for the country to be a net exporter of oil. Unfortunately, we need to take a step back and realize there are some things that are just not going to change. Here are three things that will still happen no matter how strong the U.S. energy resurgence may be.

Oil prices will still go up
For those of you who were holding out for the potential of gasoline costing less than $2.50 a gallon, I'm sorry but that's just not going to happen. Yes, American production has increased to its highest level since 1985 and, yes, oil consumption has gone down 11% from its high in 2005. But, we need to keep in mind that oil is a global commodity and the U.S. is only one part of the equation. 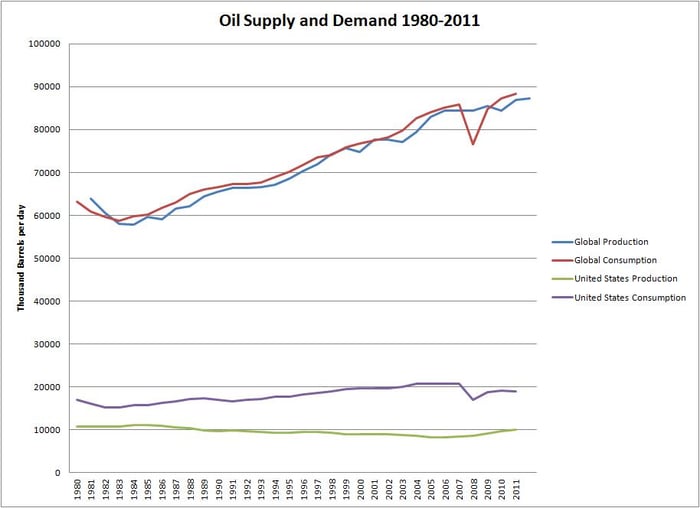 To a certain degree, prices are dictated by how much the weakest links are willing to pay for oil. In this case we have China and India, two booming economies with less than 1.3% of the worlds total petroleum reserves combined. Skyrocketing demand and lagging domestic production have vaulted China and India to numbers one and four in total oil imports, respectively.

As much as we like to believe that American companies would not let foreign demand drive domestic prices, ask yourself this question: If you were a major manufacturer and saw that your product commanded a much higher price overseas than domestically, then you would probably sell to that market, right? The same can be said for oil. Refining specialist Phillips 66 (PSX -0.23%) currently aims to export about 375,000 barrels per day of finished products from its refineries across the U.S. because there is much greater opportunity in markets overseas.

U.S. imports will never go away
At the peak of U.S. oil imports in 2005, we were importing from 86 different countries. The varying characteristics of all these different types of oil made American refineries extremely adept at processing crude. In particular, refineries in the Gulf of Mexico have become particularly good at refining heavy, sour crudes from Venezuela and Mexico. Valero (VLO -0.57%), the largest independent Gulf Coast refiner with a capacity of 1.7 million barrels per day, sources over 53% of its Gulf Coast refining capacity from heavy, sour crudes.

Today, many newly discovered unconventional sources are very light, sweet, and easy to refine. Since our Gulf Coast refineries are still geared toward heavy, sour crudes, we will continue to import that grade to use in these facilities. In fact, one type of crude oil that is strikingly similar to Venezuelan and Mexican crudes is Canadian oil sands. Canadian oil sands are in desperate need of refineries capable of treating this heavy mix, and Gulf of Mexico refineries are just the type of refinery these crudes need. This is the driving force for Canadian pipeline companies TransCanada (TRP 1.25%) and Enbridge (ENB 2.40%) expanding their takeaway capacity to the Gulf through the Keystone XL and the Trunkline conversion, respectively.

Even if the U.S. were to no longer "need" oil imports to meet its energy demand, it is more than likely that refiners will continue to process imported crudes provided that is the most financially lucrative option. It's all a matter of what we can buy at the lowest price and sell for the highest.

Coal will still be a top energy source
It's easy to be down on coal. Ever since shale gas started flowing in the U.S., many have speculated that it would replace coal because it was a more emissions-friendly fuel source and it was less expensive. While that may look to be the case (and several trends in the U.S. back it up), the truth is that coal will remain a dominant force in the energy game. To take it even further, the EIA estimates that coal will surpass oil as the premier energy source by 2017. This is in large part because of two factors: natural gas requires a robust infrastructure to transport, an infrastructure many developing nations do not have, and several countries have natural gas prices indexed to oil, so its price is kept artificially high. This is mostly how American coal company Alliance Natural Resources (ARLP 2.39%) was able to post a record 2012 in both sales and production.

What a Fool believes
For many years, America was the lightning rod for the energy industry. Today, it is becoming more and more just one cog in an extremely vast and complex system. Will the U.S. energy boom have a profound effect on global energy supplies? Absolutely. Will it send the world into a global supply glut resulting in exorbitantly low oil prices and make us the commanding force on supply? Probably not. The U.S. energy boom might not be the silver bullet for everyone's energy woes, but remember that it's getting better all the time.