It's no secret, if you follow my writing, that I really like Ford (F 3.23%) as a great value play. I've covered many specific reasons why I think Ford has turned into an incredible company since Alan Mulally took over and waded through the recession without a bailout.

That said, Ford, like many of its peers, remains undervalued, because risk-averse investors cling to past perceptions of the automotive industry. I understand the reluctance to believe that Detroit has finally learned its lesson and is now producing vehicles that are in demand. However, the misperception offers savvy investors an opportunity to profit from others' reluctance. Let's take a macro look at some factors and see if future vehicle sales will continue to rise -- increasing profits for automakers.

Macro view
To put it simply, the better, faster, and stronger the U.S. economic recovery is, the happier automakers will be. Right now, Detroit gets the vast majority of its profits from North America. The more people feel secure about their jobs and their futures, in general, the more people will make that vehicle purchase that they've long put off.

While February's unemployment report came with plenty of caveats, it was enough to make Wall Street happy. U.S. employers added 236,000 jobs in the month, making it the best jobs report since last November. It was enough to drop unemployment from 7.9% to 7.7%, the lowest since December 2008. Things are looking up, albeit slowly, and that's good news for Ford, General Motors (GM 4.00%), and Japanese rivals Toyota Motors (TM 2.79%) and Honda (HMC 1.59%).

Investors will, however, have to keep an eye open going forward, because the substantial budget cuts in D.C. will have an impact on the recovery. Let's look at some more specific estimates in the auto industry.

Tax returns
As refunds from tax returns hit consumers' pockets, automakers could see a potential boost in March sales. My friend recently gave up his clunker and used his tax return to put a down payment on a new truck. I'm guessing that there are many more consumers doing the same thing. Backing up my thesis is Alec Gutierrez, senior market analyst of automotive insights for Kelley Blue Book.

"Sales will be boosted by record low interest rates and a slowly improving job market, which recently saw the unemployment rate and new unemployment claims fall to five-year lows," Gutierrez said. "In addition, with attractive financing and ample inventory to choose from, many people receiving tax refunds will use their returns toward a down payment on a new vehicle this month." That's good news for investors hoping that March will end the quarter strong for earnings reports.

Virtuous cycle
Auto output in the U.S. helped factory production numbers last month, which, in turn, is helping to drive economic growth. Vehicle sales have also reached their highest level in five years and are expected to continue rising. We're on pace this year to sell around 15.4 million vehicles, compared with 10.4 million in 2009, when Detroit was struggling to make a profit and was producing vehicles that few wanted to buy. But that sales collapse served its purpose in paving the way for Ford and GM to fix their business models and prepare for a comeback. Lessons were learned, and automakers are now able to break even at sales of 10 million units a year.

Bottom line
That breakeven level should have potential investors excited. It's much easier to invest in a company that can now profit at the lowest sales level in decades. 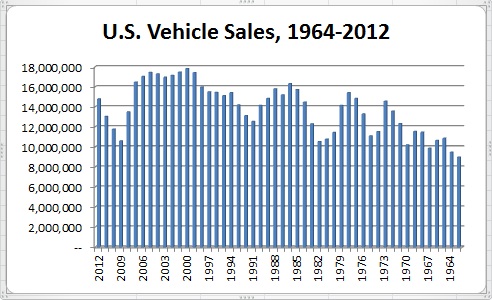 Most forecasts don't have the U.S. reaching pre-recession vehicle sales until 2020. But if Detroit can achieve profitability at 10 million vehicles, it will remain in good shape.

With the economy still adding jobs, manufacturing pushing the economy, and companies finding ways to run leaner operations, the future is bright for automakers. Ford's recent sales growth, along with the release of popular vehicles, and the company's ability to avoid bailouts during rough times, gives me reason to buy more shares. Now it just has to make sure it doesn't forget the lessons it learned when the good times roll. I don't believe it will, and I think investors would be smart to pick up some shares before everyone else realizes how undervalued Ford is.