Please ensure Javascript is enabled for purposes of website accessibility
Log In Help Join The Motley Fool
Free Article Join Over 1 Million Premium Members And Get More In-Depth Stock Guidance and Research
By Doug Ehrman - Apr 9, 2013 at 7:49AM

The U.S. labor market may contain the catalyst needed to reverse the slide in silver prices.

While the Dow Jones Industrial Average continues to flirt with all-time highs, silver entered bear market territory last week, having fallen by over 20% in the last six months; the iShares Silver Trust (SLV 0.25%) is down 22.2% since Oct. 4 against the Dow, which is up roughly 11%. Friday's non-farm payroll report showed that the economy added just 88,000 jobs last month relative to the 200,000 that were expected. The weak U.S. jobs report suggests that the economy may not be on as solid footing as the stock market would suggest. While there are alternate explanations for the action of the various financial markets, the weakness of the labor market is not likely to reverse the slide in silver without some help. 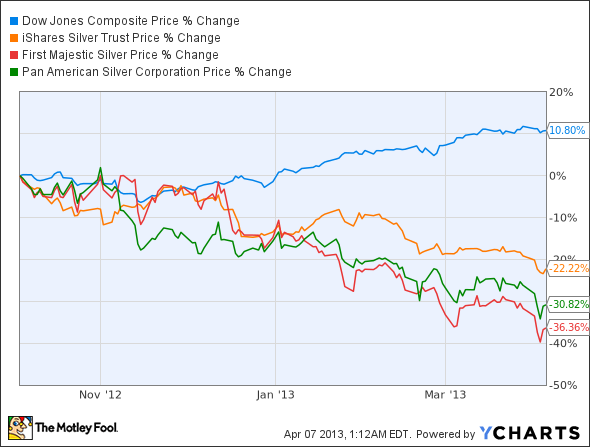 The U.S. jobs report
Friday's jobs report was significantly weaker than expected, providing some evidence that the economy is not as strong as the equity market suggests. While the unemployment rate ticked slightly lower to 7.6%, this was largely driven by individuals leaving the labor market, not increased employment. Retail was the hardest hit sector, having cut jobs despite apparently improving retail sales figures over the last two months.

Of note is the fact that this is the first jobs report since the sequestration cuts took effect. While there is no direct evidence that the cuts are responsible for the weaker than expected numbers, the connection is likely, and has a psychological impact at least. Employers may have been reluctant to add jobs until the future becomes better defined.

Alternate explanations
Douglas C. Lane & Associate's Sarat Sethi explains that hedge funds and institutional investors employed significant leverage to maximize exposure while prices were climbing, largely as a speculative response to the Federal Reserve's insistence on quantitative easing. The combination of the European debt crisis with other central banks mirroring the Fed's policies has led to strength in the dollar and weakness in commodities. As large positions are unwound, and outstanding leverage shrinks, the effect is to take down commodity prices more quickly than would otherwise be expected. Under this view of the market, the run up in stocks need not be a divergence from the evidence offered by the rest of the market regarding the strength of the economy.

The view for silver
If you reject that somewhat convenient explanation, the near-term outlook for silver remains unclear. Even if large institutional investors are liquidating silver positions, there can be little doubt that the stock market is being propped up by the Fed. Silver miners like Pan American Silver (PAAS 0.49%) and First Majestic (AG 0.96%) have each reported strong production numbers, but have seen their stocks hammered. This is partly explained by soaring operating costs and environmental concerns, but weak economic conditions shed some light on why miners have significantly underperformed the commodity.

Ultimately, I believe that silver should bottom out and that the real weakness in the economy should allow silver to reverse soon. The U.S. labor market is showing real weakness; the Congressional Budget Office estimates that unless action is taken the sequestration cuts will cost the economy 750,000 workers this year. If this occurs, it is hard to imagine precious metals not rising.